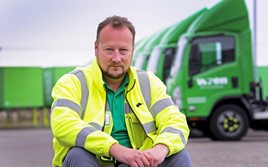 In it, workers lovingly caress work surfaces and cling to units that are due to be delivered to customers over a soundtrack of the Bee Gees’ How Deep is Your Love. So proud and passionate are they of their work, they are reluctant to let go.

Nowhere is this pride and passion manifested more than in the health and safety attention to detail of the fleet department.

He has responsibility for all the trucks running from the Barton-upon-Humber site in north Lincolnshire, including the 24/7 delivery operation, trunking to other depots nationwide and the new granite business.

Every part of the fleet is managed in-house, from maintenance to health and safety, planning to training, giving Wren absolute control over its operations.

“We are on a massive push on training and health and safety – we are trying to change the image of transport,” says Halls.

Wren has a team of four trainers at head office led by national transport H&S and training manager Tim Pearson, while every depot has its own internal trainer.

They oversee all elements of the comprehensive risk management and training programme, from new recruits to on-going driver assessments and coaching.

Potential recruits undergo driving appraisals and licence checks at the interview stage, while Wren also runs a test on the Certificate of Professional Competence (CPC).

“We want professional drivers who treat the vehicle properly and look after the customers, so 50% of the focus is on the drive and 50% on manual handling and the customer,” says Halls.

But before they even get out onto the road, drivers have to carry out a pre-user check (using the R2C app – it should take 15 minutes) where the assessor gauges their knowledge of the vehicle, a key factor in ensuring the fleet remains legal and compliant.

They also go through the tachograph and do manual entries – surprisingly, many drivers don’t know how to do this, according to Halls. Finally, they are given familiarisation training with the vehicle and its controls, and then the driving assessment begins.

Wren has several set routes, including motorways and urban roads, to test the drivers in the most appropriate environments. However, unlike at some organisations, issues raised during the two-to-three-hour driving assessment won’t necessary see the potential recruit immediately ditched.

“It means we can see where we are starting from,” Halls explains. “If they are worth working with, but have some bad habits, we will stop the assessment and give them some coaching. You can turn a good driver into a great driver.”

He adds: “No one is completely rejected, but they do have to meet our standards. We deliver to homes on tight streets so they have to be able to judge the vehicle. It’s about setting out our standards and expectations.”

Wren’s assessors can identify the causes leading up to a likely mistake, such as use of mirrors, poor road positioning or judgment, and can step in before the driver does something wrong.

They are trained by the Road Haulage Association, with refresher courses every two or three years, and their assessment and coaching services are now being rolled out across Wren’s fleet to all vehicle types.

Once a recruit passes the assessment, the next stage is a DBS (Disclosure and Barring Service) check, which records criminal convictions and cautions. It’s necessary because drivers are entering customers’ homes.

Then they enter the induction stage, typically three or four days’ classroom learning and a day in the yard learning how to use the vehicle and its machinery, including tail lifts and box equipment.

After this, they buddy up with an experienced driver. If their main work is trunking, they will follow another driver for two or three weeks to learn the routes before going out on their own – although most drivers work in pairs for health and safety reasons.

If they are in a delivery role, they undergo Wren’s ‘seven steps’ training, which starts with calling the customer before leaving the depot and concludes with delivery sign-off.

On the road, they are matched with an experienced porter – the ‘driver’s mate’ who does most of the lifting – to form a permanent two-man crew.

Wren’s extensive recruitment and training programme has been in place for the past three years and evolves all the time. Drivers undergo refresher training every year with new elements added to address any issues raised between courses. Halls even goes out with drivers to observe their performance first hand.

He estimates the training team has been responsible for a 40% reduction in accidents over that time. It has also reduced product damage, personal injury and property damage, saving the company a lot of money.

Halls is nearing his two-year anniversary as Wren’s transport manager having started as a van driver before becoming an assessor, with the company funding his development throughout, including the transport manager CPC. It was while in the assessor role that he discovered the ordeals of employing agency drivers.

“You have problems with smash ups and other vehicle issues, and you can never chase them up,” he says. “So when I became transport manager, I got rid of all the agency drivers and started training our own people.”

He added, proudly: “I have never employed an agency driver since.”

In an industry struggling with an ageing workforce and a lack of new recruits, Wren is in an enviable position of having an abundance of demand for its driving positions. A recent job ad saw almost 100 applications, for example.

“There are plenty of drivers out there,” Hall says. “We get applications from further afield because of our pay structure, but we try to keep it local because we don’t want them driving several hours at the end of their shift to get home – that’s not a responsible employer.”

What’s the key to its recruitment success? Wages spark the initial interest; company culture ties them to the business.

“We looked at salary and we increased it to just above the average for this area,” Hall explains. “Class 1 (artics) and Class 2 (rigids) drivers are on the same rate. We have a lot of 7.5-tonne drivers on grandfather rights but we put them through their licences so we could progress their careers. By investing in them, we are able to retain them.”

Wren also holds recruitment events attended by members of the transport team with fleet vehicles and kitchen products. The process is a two-way interview: it is interviewing the candidate and is itself being interviewed as a prospective employer.

“This way, they can see what’s involved and can make an informed decision,” says Hall. “It works.” 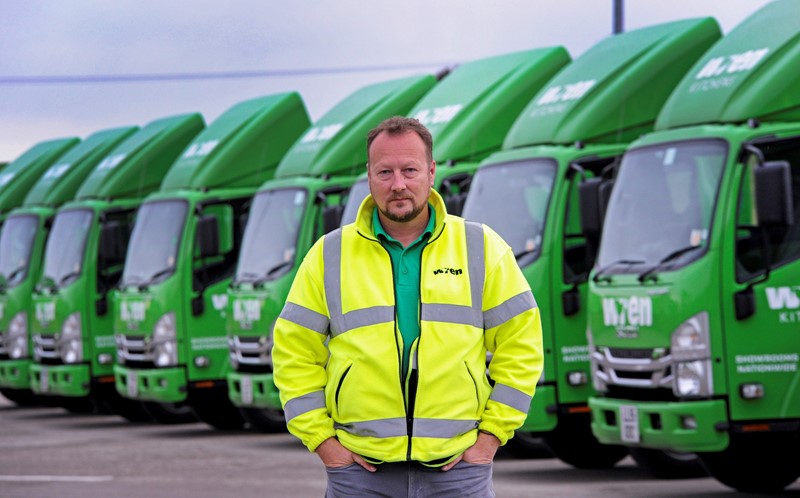 Additional drivers leading up to Christmas

At no time is this more important than in the couple of months leading up to December, Wren’s busiest period of the year when it can take on several hundred additional drivers.

All are treated to the same intensity of training as new recruits and existing drivers to ensure they operate to the highest professional standards, both behind the wheel and in front of the customer.

Every week, Halls produces driver telematics reports looking at behavioural performance such as speeding, cornering and braking, referring the three worst scoring drivers per depot each week to the training team. Any driver incident, even if a low-speed bump, results in them coming off driving duties and submitted for training.

“People thought we were criticising them at first (by taking them off driving) but now they come to us to tell us about any infringements because they want to be successful – and they are also bonused on it,” Halls says.

Wren always analyses root causes, which is where investment in Brigade Electronics camera monitoring systems a year ago really helps the investigation process.

Each vehicle is fitted with seven cameras. Internal cameras monitor the driver and stock to ensure products are loaded and handled correctly and to improve training processes. External cameras cover the vehicle blind spots, allowing the driver to manoeuvre safely.

The cameras provide recorded footage and a live feed to the transport team, which helps Wren to identify the cause of harsh events. These are measured on a sliding scale from one (minor) to five (impact). A score above two is considered harsh, resulting in the camera footage being checked – instant notifications are also sent to the transport managers.

Wren head of transport operations Lee Holmes outlines the main benefits since the Brigade cameras were fitted: “They give us an end-to-end visual which has reduced damages and enabled us to learn where we can improve. Vehicle accidents have reduced by 40% since the introduction of the cameras and they have enabled us to prove our innocence on a number of occasions.”

Aligning the CCTV footage to the telematics – installed into all trucks and vans – enables Wren to investigate incidents more quickly, including public complaints and fraudulent insurance claims.

Halls explains: “Often, it isn’t our driver that took off the wing mirror but previously we would have to pay for it because we had no proof. Now we can challenge the claim and prove it wasn’t us. Around 30-40% of the 40% accident reduction is actually down to the alleged minor scrape claims.”

Consequently, it’s no surprise when he adds: “The drivers love the CCTV – originally they were against them, especially the van drivers, but now they ask when they are going to be fitted when they get a new van.”

They have the same appreciation for telematics, as they receive live feedback on their performance. Improvements are reflected in their bonus with Halls having some discretion over the level of the rewards.

Wren estimates the return on the cameras, which cost £2,500-3,000 to install plus a monthly sim card fee, to be five times the investment over a five-year vehicle lifecycle.

They can also be used for missing items as Wren can now track products from warehouse dispatch to the vehicle and from the vehicle to being unloaded at the customer.

“It has also highlighted how many vehicles are uninsured by the number of people that don’t want to go through insurance,” Halls adds. “So we always check and they are never insured or MOT’d. It’s quite shocking.”

The police are also aware that Wren has high quality cameras in its vehicles so often ask to see camera footage if they are close to a major incident. The company, of course, is happy to help, yet another example of the pride it takes in its business.

“We want to be number one in everything we do,” Halls emphasises. “Not just in fitting kitchens but in our fleet and the way our drivers behave on the road.

“It’s about pride in being the best.”