It started out on a farm, but EO Charging is reaping the benefits of being a second generation supplier of EV charging solutions. Sarah Tooze reports

On a farm in rural Stowmarket, Suffolk, an electric vehicle (EV) charging revolution has been quietly taking place.

It was here, originally in his grandfather’s pig shed, which was converted into an assembly plant, that Charlie Jardine, founder and CEO of EO Charging, started producing his first charging unit.

Jardine is a design and technology management graduate, who says he “got sold on the opportunity for EVs” while working as marketing manager at Pod Point in 2013.

He decided to go it alone at the start of 2015 after being “frustrated working for someone else” – his parents, grandfather and uncle all have their own businesses and Jardine had a number of his own while at university.

Initially, he intended for EO (Electricity Online) to only build the hardware but by September 2015 had decided to create a software platform, too, because no one was offering exactly what he wanted.

It wasn’t an easy process.

“Having left (Pod Point), naively as a marketing person, I thought ‘how can making a plug be so difficult?’ It turned out it was difficult and that building both software and hardware is quite a big task to undertake.

"But the benefit of coming to market second is we’ve seen what worked and didn’t work with the first generation suppliers,” Jardine says. 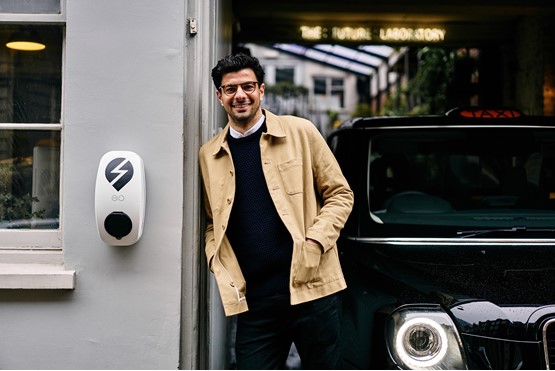 “We’ve drawn together a team of people that have been in the market a while – everyone from engineers through to developers, through to installers – that had first-hand experience and could help feed into our development and ensure the product we were building solved a number of issues.”

Today that team has grown to 25 employees – 15 based in Stowmarket, although they recently moved from the farm to a new manufacturing facility – and EO’s charging points are sold in 23 countries.

Jardine suggests there is little price difference between EO’s Genius charger and rival products, but there is a big difference when a business wants to expand the number of EVs it runs and, subsequently, requires smart charging infrastructure to monitor and manage energy supply.

EO’s smart charging product, EO Hub, is essentially a mini computer which can connect up to 32 charging points rather than having a single hub inside each charging point.

If a business needs to connect more than 32 EVs it simply buys another EO Hub as the hubs can be connected.

“We’ll do everything from initial site survey through to understanding the customer’s requirement. If required, we’ll perform DNO negotiations, putting in new suppliers and installing the kit.

"Once it’s in the ground and connected then we can provide an ongoing operations and maintenance plan,” Jardine says.

To date, EO has made almost 4,000 chargers (of which, around three-quarters have been installed in the UK). Jardine expects sales to double year-on-year for the next three years.

“That, in the grand scheme of things, is a small proportion of the market, but our business is based on profitability and actually those numbers give us what we want – a nice, sustainable business,” Jardine says.

Currently, almost two-thirds (65%) of sales have been to end-user customers for home charging, with the remainder going to businesses and what EO calls “destinations” (anywhere you can park a car for an hour or more such as hotels, restaurants and shopping centres).

However, Jardine says the business side is growing and that’s where his focus is. He would ideally like businesses and destinations to account for half of EO’s sales. 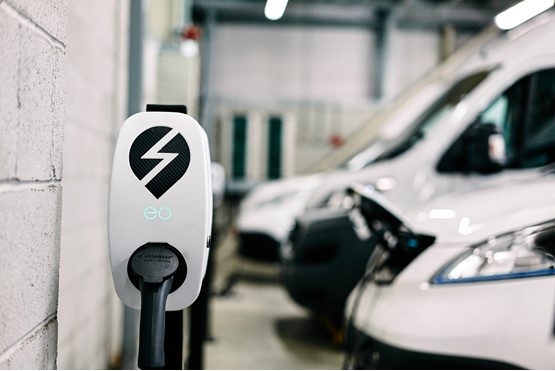 Jardine explains: “It's going in at the early stages and understanding how many vehicles they have, what's the average mileage travelled by each vehicle, where do they go and when they come back to depot how long are they parked up for? Also, if you're thinking about charging them up at the same time, what is the size of that power supply?

"So it's asking some fairly simple questions and we can also work with some telematics providers to get some more in-depth data and it's building up that understanding of how the fleet is being used so then we can advise what type of infrastructure would be suitable.”

Private hire company Addison Lee is among the fleets to have installed EO Charging’s smart chargers.

“Addison Lee has built a new depot at Heathrow Airport so we worked with an installation partner who was deploying solar panels on the roof of its new headquarters and part of that project was to deploy smart charging stations so we installed 25 smart charging stations for what will be a fleet of electric vehicles at some point,” Jardine says.

In the public sector EO Charging has installed 40 smart charge points at two locations for Hampshire Police as it looks to replace 40 conventional cars with BMW i3s - a move which it believes will save £450,000 over three years – and 25 smart charging stations for Leeds City Council as part of its plans to have a fossil-free fleet by 2025 (see Fleet News, April 19).

Its biggest project to date has been installing 63 smart charging stations for Gnewt Cargo as part of a two-year trial of larger electric vans for last mile delivery. This has been part-funded by Innovate UK and OLEV (Office for Low Emission Vehicles) and is supported by the mayor of London and Transport for London.

“We’re providing more than just physical hardware and software. It’s building a bespoke solution to manage the power supply at the site and schedule charging sessions based on how the vehicles are being used,” Jardine says.

“We look at when they need charging by and we are working with Gnewt’s telematics provider so we can understand the state of charge in the batteries and automate the scheduling so we can charge vehicles based on when they are required to be picked up and sent out.

"That type of project is one of very few. But, if we start thinking about the number of similar size ones that will appear in London and then the rest of the UK, that is going to have a fairly significant impact on the grid.

"We need to ensure this infrastructure is smart and can be controlled remotely and has the customer’s needs in mind.”

First year findings suggest an electric van is around £2,000 per year cheaper than its diesel equivalent for Gnewt, with the vans doing an average of 84 miles per week, and saves 1.98 tonnes of CO2 per year (equivalent to planting 990 trees per year). 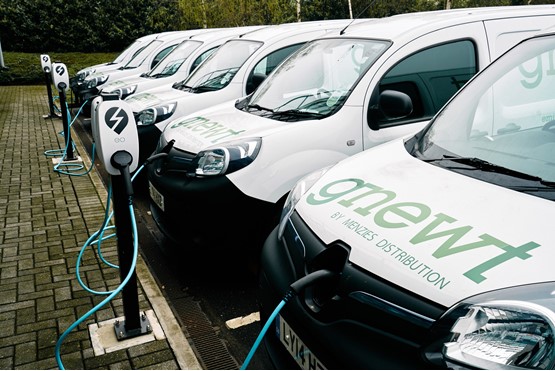 Jardine acknowledges it is essential the business case stacks up for fleets.

“If you are the right type of user, going electric can save you money,” he says.

“This is a business decision. Yes we can tick a green box and you can do a lovely press release but, actually, the majority of the world works based around numbers so, hopefully, if we can discuss with customers and present hard facts around the savings that going electric makes then I think we’ll have an easier job in helping businesses and councils accelerate their adoption rates.”

He adds: “Electric vehicles are not right for everyone at this point. It’s got to be practical and, as a fleet manager, organising and running a fleet is a complicated process so introducing EVs into that mix is potentially a bit of a challenge.

"We’re not looking at electrifying every vehicle on fleet today because it doesn’t work practically or commercially.

“I would advise people to actually look at the fleet, address which proportion of the fleet is worth electrifying to start with and we can take the customer on a journey to full electrification but by biting off bits at a time.”

Telematics can help assess whether an EV is feasible (EO is building an API – application programming interface – which will enable it to integrate with any telematics provider) but it’s also important to consider the availability of public charging infrastructure.

Jardine recalls how his mother, who has a BMW i3, was “petrified” of public charging.

“People call it ‘charging in the wild’ because you have no idea where to go, and when you get there you’re keeping your fingers crossed the bay is going to be available.

"Is it going to be working and have you got the right card? From a practical standpoint we think although we have an app it’s got to move towards contactless, no memberships, no pre-registration, just pay-as-you-go,” Jardine says.

“We're about to launch a new product called the EO Kiosk which has a contactless payment reader and it eliminates the requirement for memberships, apps and RFID cards.

"There is a place for RFIDs when you link it back to the fleet piece because if you can track where your drivers are charging, whether they're charging at work, at home or on the go, from a central billing perspective and energy usage or fuel usage stand point, that's important information that you need to glean but the general consumer doesn’t want an RFID card they just want to tap and go.

"I think the key trick is to ensure that with every public charge point there is an option for just contactless charging and that's something that we're trying to start to push.”

What about the issue of public charging points not working?

“As EVs become more mainstream I think companies, charge point manufacturers, network operators, won’t be able to get away with having chargers that don’t work because that bit of equipment is business critical,” Jardine says.

With workplace charging, the stumbling block, in EO’s experience, is the landlord.

‘Normal’ workplace installations take EO about four weeks, “on a bad day you could be looking at 12 weeks”, according to Jardine but in one instance it has taken 18 months due to a landlord. EO overcame the issue by funding the infrastructure itself and will make a return on investment by charging drivers to use the stations – a model it could deploy elsewhere.

It is also investigating vehicle-to-grid (V2G) as part of a consortium with EDF Energy, autonomous electric truck and manufacturer Arrival, and Oxford City Council, backed by £1million from Innovate UK. It will deploy about 100 V2G charging stations by the start of 2020, aimed at commercial fleet users.

He is excited by BP’s recent acquisition of Chargemaster (fleetnews.co.uk, June 28) – a move he says he couldn’t have imagined when he started in the EV charging market.

But then who would have thought that on the streets of Stowmarket today you can now find a Tesla Model X, Golf GTE, Vauxhall Ampera and a Renault Zoe. And an ambitious EV charging provider.