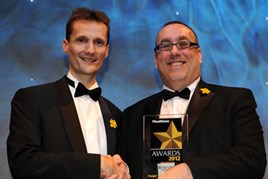 Three years ago the Freight Transport Association (FTA) was receiving more and more calls for help from van fleet operators.
It decided to dig into the issue further, holding a number of focus groups with van fleet operators from different industries.

The message that came back was: operating HGVs is relatively straightforward – there are clear rules and regulations, they are driven by vocational drivers with vocational driving licences and at the end of the working day they return to their operating centres – but vans are a different story.

“They were looking for some kind of framework,” explains Mark Cartwright, head of LCVs at the FTA. “If they wanted to operate their vans in a safe, compliant and efficient manner what should they be doing? What does ‘good’ look like?”

This led to the creation of a code of practice (known as the ‘Van Excellence Code’), which covers the driver’s responsibilities, van specification, maintenance and how the vehicle is operated on a day-to-day basis.
Cartwright is keen to point out that the code was developed in conjunction with a number of the UK’s best operated van fleets – the Van Excellence Governance Group.

“They own the code,” he says. “We can’t change the standards without the agreement of the Governance Group. That’s a great balance to have in the system.”

Fleet operators can choose to be accredited against the Van Excellence Code, giving them an independent view that they are operating at the right standard.

There is also a ‘Guide to Van Excellence’ which explains how to meet the standards.

While many of the early adopters were large fleets the FTA has had more interest from smaller fleets over the past year. The smallest fleet accredited so far is six vans.

Some of the large bluechip fleets are also now encouraging their contractors to achieve Van Excellence.

Mark Cartwright: It’s a straightforward way of adopting best practice operational standards and being assessed against those. So as an operator you can see how you’re doing and tell your board and your drivers that you’re good. And it’s not just you saying that you’re good, someone has come in and told you you’re good. The bigger, collective part of Van Excellence is to give the van operating industry a voice and demonstrate to the Government that it is capable of operating to the right kind of standards, without the need for legislation.

FN: Do they have to go through accreditation?

MC: No, we’d be happy if they adopt even part of the process. If the electrical contractor down the road that operates 10 vehicles suddenly thinks ‘wouldn’t it be a good idea to check driving licences every now and again’ that’s something. They may then keep going and look at another area.  It’s a bit like going to the supermarket and picking up a recipe card. You might look at it and think ‘I can do that’. Then the next week you might get another one and think ‘I can do that as well’. Then you decide to buy the cook book. It’s that kind of engagement process we’re looking for.

FN: How do van operators get accredited?

MC: It can be pretty straightforward if they’re already operating at a high standard. It’s not a complicated, onerous process. We come along and carry out an independent audit, which takes about half a day. It’s a procedural audit only, we don’t look at any vehicles, we just look at their procedures and processes. What we’re trying to do is ensure their standards and processes are good enough to identify issues. We’ll provide as much support at they want prior to it, explaining what we’re looking for and how we’re going to go about it. It’s not a surprise audit, there’s no point in us doing that. Assuming they’re successful we’ll award it. If not, we do have a re-accreditation process, although we’ve not used it yet.

FN: What processes should they have in place?

Then it’s about the vehicle - is the vehicle suitably specified for what you’re looking to do? Is it road worthy? Demonstrate to us that you have an appropriate inspection process on the vehicle.

The word ‘appropriate’ is important. Everything should be appropriate to the business because the maintenance programme that might work well for the civil engineering company might not be appropriate for a parcel company operating in central London or a courier that is doing a lot of miles up and down a motorway every week. So it’s about looking at what your vehicles are doing and coming up with something appropriate.

FN: Vans operated under Van Excellence should achieve a greater residual value – why is that?

MC: If you talk to the auction houses they will tell you that a BT Fleet van will get a higher resale value - maybe 2-3% more than the average. The reason people like BT Fleet vans is they know they have been properly specified, they’ve been properly maintained and operated through their life and they’ve been operated by a driver that’s gone through a fair bit of training and induction. All of those things are what Van Excellence is about.

An element of supply and demand will come into but if you’re able to demonstrate that a van has been operated under the Van Excellence standards throughout its lifecycle it ought to be a better bet at auction.

If you start getting a few vehicles going through auction achieving 2% more than the average then Van Excellence starts paying for itself.

I have to say, as a caveat, given that most vans are kept for four or five years and we’ve only been doing Van Excellence three years, we don’t know whether the theory works yet but we think it should. It makes sense.

The FTA recently began offering a half day training package based on the Van Excellence Code, leading to a three-year FTA qualification – the certificate of excellence in van operations.

Since its launch, more than 200 people have qualified. Most of the uptake has been company courses which is charged at £550 for up to 16 delegates.

“Operators are tending to use it as a course for their line managers and supervisors, lead drivers and driver trainers,” says Cartwright.

“We’ve also been very successful with the take up from some providers to the industry. Volkswagen, for example, has trained a member of their sales team at every dealership.”

The FTA is now working with manufacturers to develop an accreditation standard for van dealers.

“The main thing we’re going to keep doing is spreading the word and doing everything we can to encourage operators to get involved,” Cartwright adds.