Change the debate to get true global picture on emissions says manufacturer as it continues to examine powertrain technology options. Stephen Briers reports

At a time when most of its rivals are distancing themselves from diesel by publicising their ‘holier-than-thou’ aspirations to move to electrification – albeit in many cases still using petrol/diesel as the core component – Mazda remains defiantly pro internal combustion engine (ICE).

The company believes there are significant opportunities to improve the emissions and fuel efficiencies of both diesel and petrol and it wants to switch the conversation back to a well-to-wheel debate.

Well-to-wheel was the popular argument against electric and hybrid vehicles a decade ago.

Manufacturers pounced on academic studies that claimed the methods used to extract the minerals required to produce batteries, and the coal-fired power stations providing much of the electricity to recharge them, meant that when considering the entire emissions released over the life of the car – from production to destruction – ICE came out pretty well.

The assertions have quietened in recent years as the calculations changed with the move to wind- and solar-powered electricity sources but, when taken at a global level, Mazda believes the environmental arguments for ICE remain robust.

Developing highly efficient petrol and diesel engines will play a central role in achieving Mazda’s ‘Sustainable Zoom-Zoom’ strategy, supported by a gradual move to electrification – but only in markets where demand justifies their introduction.

“Electric vehicles are probably the solution in the long-term, but not the short-term,” says Mazda UK PR director Graeme Fudge. “So, we are looking at a suite of technologies and deploying the technology where it’s relevant to the market.”

Next year, Mazda will launch a mild hybrid battery car and will begin talking about its first fully electric car but it has not confirmed which markets will receive it.

However, based on its ‘relevancy’ criteria, countries such as Norway, where incentives have created high demand, will be first.

A plug-in hybrid is slated for 2021 as Mazda continues a steady build-up to 2035 when it expects most of its models to include some form of electrification.

However, ICE will still be a dominant feature; Mazda believes 85% of cars will still have it at their heart.

Mazda makes a compelling case for petrol and diesel with its SkyActiv engine technology. 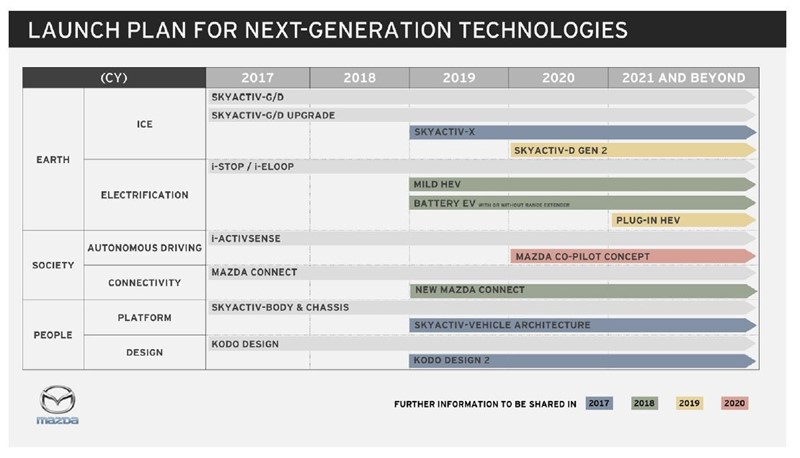 The first generation ‘G’ engine reduced CO2 emissions by 20%; the forthcoming ‘X’ version will slice another 20%, while also improving torque.

It will be available next year, initially in the Mazda 3 before being rolled out across the range. A diesel version, promising similar reductions in CO2 emissions, will be launched in 2020. It will also prioritise reductions in NOx and particulates.

“We are balancing the need to respond to the environment with cars that people enjoy driving. We believe we can get well-to-wheel emissions to a level equivalent to an electric car, with electricity from both coal-powered or any other source,” says Fudge.

“We want to improve ICE as much as possible then go for electrification. There is still a lot of development and improvement to be made for both petrol and diesel.”

Nevertheless, Mazda faces an uphill task in tackling the growing perception that diesel is bad, formed after a series of damaging news stories, from dieselgate to the ClientEarth court cases.

It’s exacerbated when people are more concerned about the local impact of NOx and particulate emissions from the exhaust than they are about the global warming implications from well-to-wheel. It’s classic Nimbyism – move the problem elsewhere.

Despite the negativity, and the year-on-year reduction in diesel registrations, Mazda reports demand from end-user fleets has remained relatively strong. And, it adds, residual values have also held up well.

“As an industry, we have to ensure the Government is behind diesel and that we are promoting it as the right fuel for certain uses,” says Fudge.

“If you have a Euro 6 diesel car, you can go into low emission zones; the diesel debate lobbying could be having an effect.”

The angle of discussion has altered, though, according to Steve Tomlinson (pictured), Mazda UK head of fleet and remarketing. 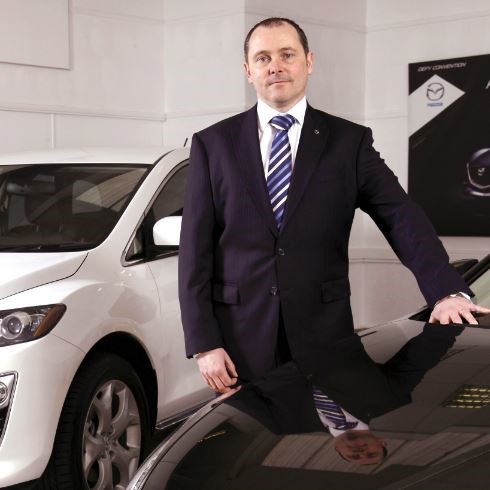 “The first question we are asked by a prospective customer is ‘do you have any hybrid solutions’,” he says.

“But what’s interesting is that our solution with SkyActiv X is exciting a lot of those customers as a viable alternative because it ticks the environmental credentials and also provides the company car performance drivers want.”

However, both existing and prospective customers are becoming more circumspect when it comes to vehicle replacement. Their cautiousness is not purely about diesel; there are plenty of other concerns persuading them to put orders on hold.

“There is an element of nervousness and holding off, but it’s more about WLTP (the new fuel testing procedure) and its potential impact on tax, not diesel,” Tomlinson says.

“Few manufacturers are ready to provide finalised figures and also beyond 2021 we don’t know the tax brackets. Enough companies are deferring for us to notice.”

WLTP and the CO2MPAS calculation intended to convert the figures back to an NEDC-equivalent are casting a long shadow over fleet sales with CO2 emissions showing 10-15% increases for those manufacturers that have already released figures.

Mazda, which will have all its figures signed off by the September deadline (WLTP-tested models will be labelled with a ‘+’ after the trim name for clarity), believes it could actually be a beneficiary from WLTP.

“Mazda 2 is already in the market with a like-for-like 7g/km increase on the correlated figures and we think the Mazda 6 will have a slight increase but it will also have changes in technology and specification,” says Tomlinson.

He suggests that the CX-5 might even register a slight reduction in CO2.

Why is Mazda bucking the trend? “Our philosophy when we launched SkyActiv was right size, not downsize. Larger engines can be more efficient because they require less power to be used,” Tomlinson says.

“Also, we built the CX-5 with real-world economy in mind.”

He adds: “We expect our competitive position will improve.”

Fuel efficiency and CO2 emissions are not the only comparative improvements versus competitors. Residual values have also risen this year across all model lines.

Tomlinson attributes this to the “consistent long-term approach to managing our volume and the channels in which we operate”.

Rental registrations fell by 50% in the first quarter of the year and Mazda, which positions itself as a “credible alternative to premium”, plans to do no short-term business for the rest of the year.

The majority of its factory allocation will head to end-user fleets, with the balance to Motability and internal channels.

“Our plan for the fiscal year is to be marginally lower than last year and we are on track to deliver that,” Tomlinson says.

“When you add in our CO2 position with our enhanced RVs, our wholelife costs and our high levels of standard equipment, we are in a good position.”

New research by Mazda has revealed that 55% of UK drivers, and almost 60% of European drivers, see a positive future for petrol and diesel engines.

Mazda claims its Skyactiv-X petrol engine has the potential to reduce emissions from an internal combustion engine to below that of an electric vehicle when measured well-to-wheel.

Mazda has announced pricing and specification for the new Mazda 6 Saloon and Tourer, starting from £23,195.