Pod Point: Parking for an hour? Charge up your EV...

Erik Fairbairn aims to set up charging points wherever they are needed to ensure momentum to EVs doesn’t stall, writes Christopher Smith 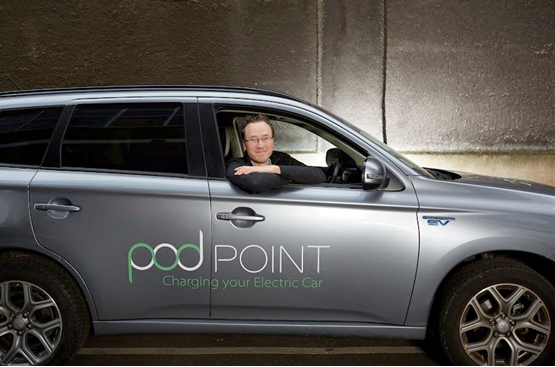 A charging point everywhere you park for an hour or more. That’s the aim of Pod Point, one of the major players in the electric vehicle charging sector. The company is getting there, gradually, with around 22,000 points in operation across the UK, and 5,000 more in Norway.

Founder Erik Fairbairn set up the business in 2009, after previously establishing a couple of other businesses – before that, he was an engineer, including a spell at Ford.

Pod Point’s approach to the market is logical – with the business split into home, work and public charging point divisions.

Around 17,000 of the company’s UK charge points are home-based, and Fairbairn explains that the average electric vehicle driver requires the use of one and a half to two charge points in their daily driving life.

Pod Point is a recommended charging point provider for manufacturers including Hyundai, Nissan, Renault, Tesla, Volkswagen and Volvo, and much of its work is providing points for customers of new vehicles.

Home charging point installations currently attract a £500 subsidy from the Government through the Office for Low Emission Vehicles (OLEV), which leaves an electric vehicle (EV) driver to pay around £400 – though many manufacturers will fund the rest of the cost.

“You have to map the growth of charging facilities to the growth of vehicle sales,” says Fairbairn, explaining that the rate is currently fairly proportional.

At present, financial incentives and environmental evangelism are still driving growth in electric vehicle take-up, with the necessary infrastructure following not far behind.

The recent introduction of the OLEV workplace charging grant now offers a universal financial contribution for businesses to install chargers for the first time.

There have been contributions for some public sector bodies and a few businesses in certain regions in the past, but the new programme is open to all – with some criteria.

It’s not as generous as the home charging scheme – supplying £300 vouchers for the installation of up to 20 points per business (with a few complications for franchises and subsidiaries) – but it should encourage many businesses to add facilities, which Fairbairn welcomes.

In some cases, commercial installations are more challenging than a home one.

“In a perfect world, a business will tell us they want some charging, we’ll look at the EV market in their area and the size of the company, and offer a steer on how many points may be a good idea.

“Don’t necessarily tell us where you want the chargers. Most businesses want a cost-effective install, so we can advise the cheapest and easiest places to put them.

“By all means, a company can say we’d like six points over there – but in cases where installing a few metres away would be a tenth of the cost, we’d always suggest that,” Fairbairn says.

A workplace or retail installation for multiple sockets isn’t just putting up a few posts and connecting them to the mains, however.

“If you’re a big organisation and you’d like 100 or 200 charge points, then you might be in a situation where you can’t charge all of those vehicles on full power at the same time.

Pod Point’s system works on an array basis – it can manage the total load across those charge points.

“It means you don’t end up having to reinforce grid connections, and other expensive stuff. It’s a really efficient way of putting a large amount of infrastructure in.”

The array operation offers benefits to smaller installs in terms of forward planning, too.

“If you install 10 now, it’s possible you would want 50 in three years or so. We’d provide a little plan for growth to ensure the number of points can be easily scaled if needed.”

Software-managed charging, as Fairbairn calls it, means a business or retailer can see an overview of their charging infrastructure across the country if they wish.

It means they can see utilisation and the stress levels of points, and work out where they need to add more.

This system is not just limited to one Pod Point customer.

Every OLEV-subsidised charging point has a requirement to report usage statistics through a sim card, but Pod Point units take this a step further, and every Pod Point built since launch is connected to a central hub.

If needed, the company can help to control and manage demand across all its units, whether that be at home, a destination or in the workplace.

“Centrally managing the roll out of charging is quite important. If 6% of vehicles were electric, and plugged in to charge at 6.30pm, we’d be close to reaching our peak generation capacity as a nation. The system could reduce power usage at that point, and spread charging out throughout the night.

Fairbairn continues: “Pod Point is aiming to ‘solve’ charging at scale. Of course, we’re delighted to help you charge one car, but the big challenge is on a countrywide scale.”

The company’s view of utilisation is perhaps a little different to that of a fleet manager.

“If a point is being used for seven hours of every eight-hour day, then it could either be used by one person all day, or seven different drivers for an hour each.

“A retailer’s usage profile looks very different to a workplace or a long stay car park. Working out behaviours and cycle times is a big part of what we do.”

As volumes of electric vehicles increase, and the demand for charging grows, the issue of who pays for the fuel is likely to become more relevant.

Fairbairn says: “You can give it away for free, and stump the cost of the energy, cost recovery which is charging customers loosely what the energy costs, or you can make a profit.

“It’s not for me to tell hosts which is the right answer. In the workplace market, it’s likely most employers will opt for the cost recovery basis in time as volumes increase.”

Pod Point’s systems, accessed by a web page or mobile app, will handle the technical process of charging, and collect payment from the user at whichever rate is desired and pass it back to the charging point’s host.

Time-based charging is one of the most popular options at present.

“The average customer doesn’t really know what a kilowatt hour is. Consumers are already used to paying to park somewhere per hour, so we have been emphasising the range per hour – for example, a 7kw unit can charge at up to 30 miles per hour.

Fairbairn continues: “Long term, perhaps we’ll all get familiar with kilowatt hours, but at the moment, we understand time much better than we understand units of energy.”

Most of the growth in charging points is in the private sector, according to Fairbairn, with retailers opting to install additional points to attract more customers – taking a lead ahead of the public sector.

A driver may choose a particular retailer over another because of its charge point, he says, but drivers are rarely visiting a destination just to top up on power.

“Our job is to make charging as simple as possible, and to ensure there are chargers in places people want to go.”