Since Scotland’s regional police forces were amalgamated, big fleet savings have been achieved. But that’s not the end of the story.

Police Scotland’s fleet team are no strangers to change. In 2013, the amalgamation of all eight of Scotland’s regional forces into Police Scotland saw it become the UK’s second-largest force after London’s Metropolitan Police.

At the time, Police Scotland bought together nine fleet departments and more than 3,500 vehicles to be centrally controlled.

The team has spent the past five years consolidating the legacy fleet policies and standardising the fleet operation countrywide.

While implementing these changes, Police Scotland’s fleet department has achieved annual savings of more than £2.5 million in the past three years – earning it recognition for Outstanding Cost Control at this year’s Fleet News Awards.

With current and future initiatives, further savings on its annual budget spend are being targeted.

Since the inception of Police Scotland, the fleet team has been able to identify areas where the fleet could be rationalised. Overall, the fleet size has been reduced by around 5% – saving £1.5m by identifying and removing under-utilised vehicles.

It now operates a fleet of 3,400 vehicles, including 2,400 cars, around 800 vans and 100 motorcycles. There are also light goods vehicles and specialist vehicles. Around 55% of them are liveried, but all are in-service police vehicles.

Further savings of £950,000 were achieved by reducing the size of the fleet department by 30%.

Overall, 106 people now run the fleet including administration and maintenance. 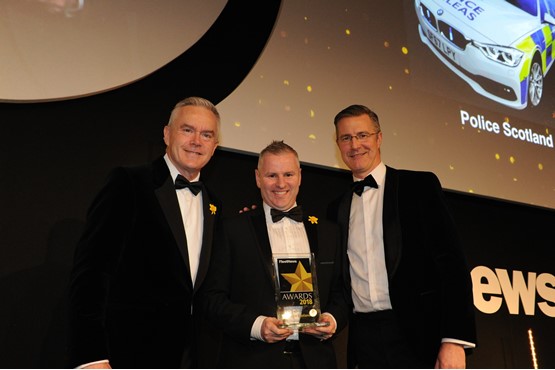 Stewart Taylor has been fleet manager at Police Scotland for the past four-and-a-half years; previously he was acting transport manager for Strathclyde Police – starting his career with the force 10 years ago.

“We certainly aren’t sitting here thinking we have taken all the cost savings out of our area. We can continue to improve in our operation to provide both efficiencies and financial savings to the organisation,” he says.

“A lot of what we have done was procedural; looking at the procedures that we carried out and looking at the cost benefits we could make by standardising them.”

Taylor has held various roles in the transport sector in the past 25 years, including vehicle technician. He has significant experience in workshops.

Now, he looks after the day-to-day running of Police Scotland’s fleet and vehicle maintenance.

The management team is led by Tony Chalk, head of fleet, while there are vehicle maintenance managers in each geographical area.

As Police Scotland sets about evolving its fleet policy, vehicle utilisation is a priority.

The force isn’t looking to reduce the number of vehicles it has any further, instead it wants to make sure they are being utilised in the best possible way.

“Ultimately, the goal is to provide the right vehicle at the right time to the frontline police,” says Taylor. “We need to identify the changing needs of modern policing and align our fleet strategy to how is best to deliver that.

“It’s about vehicle type and utilisation. We have also begun to standardise in the past few years, since becoming Police Scotland – there is still work to be done in that area to make sure we have the right mix of fleet.”

Part of that will include the fitment of telematics to the fleet for the first time.

“We are investing in telematics and it will go live in the fleet next year. It will be fitted to all vehicles on the fleet.

“It will be for overall utilisation of the fleet, with the added benefits of reducing administration burdens and looking for operational efficiencies.

“This is all about making the best of what we’ve got. What we are looking for from telematics is to improve the utilisation of our own vehicles and reduce the need for any additional spend on rental vehicles,” Taylor explains.

Rather than making snap decisions or significantly overhauling the fleet operation, Taylor and the Police Scotland fleet team have a mantra for ‘continuous improvement’.

“Part of the new fleet strategy will be to look at improvements we can make in the next three years to the fleet.”

Key to the strategy is a fleet procurement process that minimises fuel economy and carbon emissions.

Police Scotland has engaged with Transport Scotland’s Switched On Fleets initiative, which provides public sector fleets with free analysis of new opportunities to deploy electric vehicles in a cost-effective way.

“Part of our new fleet strategy will be geared towards a real push, where it makes sense, to bring these alternative fuel vehicles into our mainstream fleet operation.

“We’ve got some fully electric vehicles at the moment, spread across the country in different roles.

“The plan is to get a proper plan together and bring them in as a sustainable alternative to what we are currently using in fossil fuel vehicles,” explains Taylor.

Charging the vehicles is carried out on-site, but the team is working with local authorities and partners to improve the charging infrastructure across the country.

“The vehicle options available to the police are getting better. It will relieve much of the anxiety around range for police purposes,” Taylor adds.

One of the issues with fully electric vehicles for police use is the varied roles they play in day-to-day use.

Cars, for example, could be parked at the scene of an incident for hours with a need for their lights to be functioning – a challenge for an electric vehicle, as the battery may go flat.

But, Taylor is confident electric and hybrid vehicles can play an increasing role in the Police Scotland fleet and help to reduce costs further.

The Scottish Government has committed to introduce Low Emission Zones into the country’s four biggest cities between 2018 and 2020.

Glasgow will be the first to launch, at the end of 2018, but, initially, it will only affect buses. Plans to restrict cars and vans from the area have not yet been announced. Further zones are expected in Aberdeen, Dundee and Edinburgh.

As a public sector organisation, Police Scotland is looking to align its vehicle purchases with the Scottish Government’s clean air commitments, which include phasing out petrol and diesel cars by 2032.

Taylor says: “I think there is pressure on us to have alternative fuel vehicles. We, as a public body, should be leading by example, but it also has got to be right for us.

"We’ve got to do it in a proper and sustainable manner. That is what we aim to do in the upcoming period.” 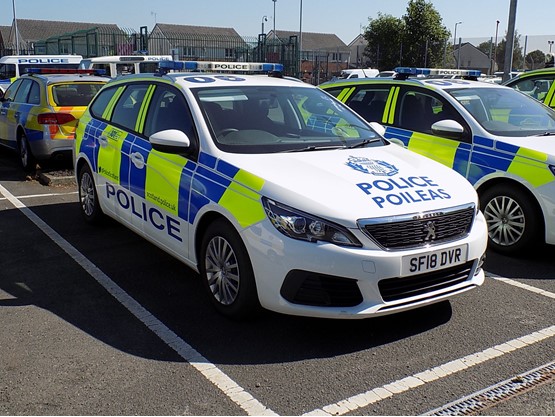 Operationally, it is not yet possible for the entire fleet to be switched to electric; but part of the fleet’s strategy is to seek out the lowest emitting vehicles where possible.

“Our strategy is to reduce the vehicle and engine size further across the range of categories of vehicles,” says Taylor.

With a patch of more than 30,000 square miles, Police Scotland’s beat is vast; ranging from the English border to the distant islands of Shetland and Fair Isle.

Taylor says: “There are some areas that need specialist vehicles, but we are predominantly standardised. I think we probably run more 4x4 vehicles than any other force in the UK.

"The rural areas and some of the terrain we cover requires some specialist vehicles.”

When it comes to replacing cars, Police Scotland operates a four-year replacement cycle for most vehicles – specially converted ones are an exception.

He says: “A good fleet strategy has to strike the balance between what is achievable within the financial constraints of the business and what is the optimum operating policy of a fleet of our size and diversity.”

The current fleet is funded almost entirely via outright purchase and made up of a variety of brands.

“We buy all the vehicles through the Home Office contract; at the moment we are predominantly Peugeot, BMW and Ford,” says Taylor.

As part of the fleet policy, it uses a wholelife cost model and is investigating the viability of leasing.

“In line with the Police Scotland corporate strategy, the fleet department will evaluate different ways of operating and the different funding methods before deciding which method best suits our circumstances,” explains Taylor.

However, he believes outright purchase remains a better option for a public sector fleet with a dedicated fleet manager.

“The overall approach is to secure the best possible value for money through national buying groups to gain collaboration, standardisation and environmentally-friendly purchasing solutions for Police Scotland,” Taylor says.

The fleet buys fully converted vehicles directly from the manufacturers to fulfil its volume and the specialist vehicles it converts either in-house or with specialist converter partners.

“Manufacturers are getting a lot better at providing a turnkey solution,” says Taylor. “We have long-term relationships with the majority of the manufacturers.

They understand our needs much more these days than they used to. They are more committed to that turnkey solution.

“It’s a better option for us. It’s much more of a partnership than just buying a vehicle from them.” 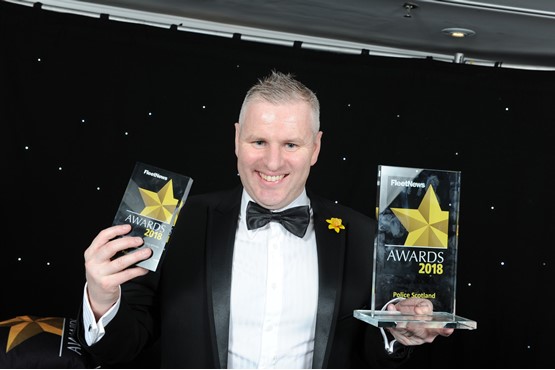 In order to improve customer service, the next step for Taylor is to improve the system with additional functionality.

“We are looking at much more information being available to the end-user on an automation basis.

“Improvements in our fleet management system will enable us to provide more alerts and more interaction with the end-user when it comes to vehicle maintenance.”

Police Scotland already uses a web portal, introduced last year, and will be investing in a fleet management app.

“It will enable the driver to perform vehicle checks and carry out defect reporting remotely, rather than having to return to the office to perform these tasks.”

The web portal provides division managers with information about all the vehicles in their area. It is used to benchmark those vehicles against the fleet average, manage SMR and MOT requirements and view fuel usage and associated costs.

Taylor says it has provided a much better working relationship between the fleet department and the end-user as they can now plan and organise the downtime of vehicles to suit their needs.

Changes to the fleet’s hire car policy, to limit vehicle choice, and new fuel cards that incentivise the use of cheaper filling stations delivered additional six-figure savings, with further reductions expected next year.

Police Scotland employs more than 17,000 police officers and there are more than 22,000 people in the organisation that may need to drive one of the fleet.

Management of the people side of the fleet is covered by Police Scotland’s HR team. Working with Taylor to ensure it is implementing the right things to align with the fleet strategy, HR looks after everything from licence checking to driver training.

“Fortunately, I only have to worry about vehicles,” Taylor jokes.

He expects the new fleet policy to be ready by the end of the financial year.