Silverstone: ‘Suppliers go the extra mile to keep us on track’

Silverstone is home to the British Formula 1 Grand Prix, but it also hosts many other high-speed events throughout the year. Having a reliable fleet is a must.

Some of the richest people in the world visit the iconic Silverstone race circuit in Northamptonshire each year. But, when it comes to operating the fleet that keeps the races on track, every penny counts.

Across the year, the circuit plays host to more than a million visitors who come to watch hundreds of races and events.

But keeping the circuit operational and the crowds safe and well-fed requires an army of staff in addition to a fleet that is a world away from the high-tech machines that grace the track.

The job of sourcing the right cars and vans to keep the circuit moving falls to procurement and contracts manager Lee Thomas. 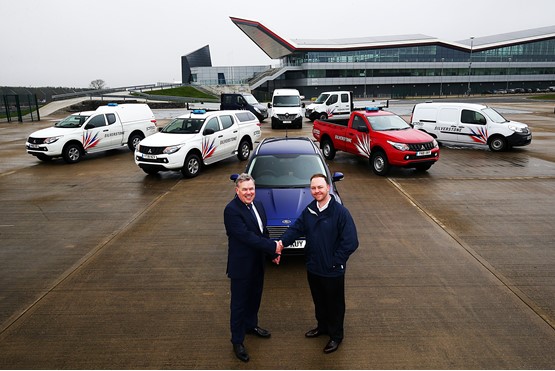 This isn’t his first role in the motor racing world. Thomas spent seven years with the Honda Formula 1 team, based in Brackley.

He also acquired important purchasing experience during previous roles in the food and beverage industry.

This provides valuable insight for the wide-ranging roles the fleet plays at Silverstone, with vehicles used for several purposes, from fire tenders to fast response ambulances, VIP transport, relocating temporary structures and support for on-site catering across its 600 acres.

There are around 200 vehicles in the Silverstone fleet, mostly commercial vehicles including 4x4s, which can be multi-use or allocated to specific departmental roles.

They rarely leave the circuit and cover relatively low mileage during their four-year lifecycle, driving as little as 3,500 miles per year.

A range of funding methods are used to acquire the fleet, from outright to hire purchase, leasing and even contra deals with manufacturers keen to expose their brands to the thousands of fans at the circuit.

Sourcing is typically through traditional channels and Thomas relies on the support of suppliers to provide the expertise needed to acquire the best vehicles for the right price.

He says: “We aim to work with suppliers that understand the unique requirements of the fleet and can support us in getting the best fit for our needs. This recently led to us changing fleet management suppliers.”

He was impressed by the proactive approach of Bradford-based JCT600 Vehicle Leasing Solutions (VLS), a stand-alone business within dealer group JCT600.

It also has a racing heritage as the business was founded by renowned rally driver, Jack Tordoff, who won the Circuit of Ireland Rally in 1973.

However, it was the attention to detail and support when engaging drivers in the procurement process that secured backing from Thomas.

Thomas says: “JCT600 went the extra mile. They were keen to meet face-to-face and really wanted to look into our requirements. They suggested manufacturers that were the best fit and were also involved in getting us the best deal.

“It is important to get drivers’ views on vehicle choices as they will be using them every day and will be able to identify any issues with a particular model. Their feedback is very important.

“We were extremely impressed by the amount of hard work and time JCT600 VLS put in and the on-site demo day it organised enabled personnel from our various departments to try out a number of makes and models for themselves.”

He adds: “JCT600 VLS helped me to do my job. It took our requirements and wanted to help us. I trusted it to get us to the point of delivery. It has continued to provide a high level of personal service.”

This trust is a vital aspect in choosing suppliers, as the seasonal nature of the circuit means delays can be costly.

Vehicles had to be delivered within a tight time period and their arrival had to coincide with the removal of the old fleet.

Thomas adds: “JCT600 VLS made the transition easy when it could have been quite difficult ordering these vehicles and getting them delivered within four-six weeks.

“We don’t have a lot of spare vehicles, so the change had to be concise and reliable.”

Paul Walters, managing director for JCT600 VLS, says: “We were also able to work within Silverstone’s time frame, with the vehicles ordered, liveried and delivered within just three months.”

A majority of the fleet has been fitted with hands-free kits and parking sensors to minimise incident damage.

If a collision occurs, its cause is reviewed and plans laid to avoid repeats. Silverstone also collects eye witness statements. 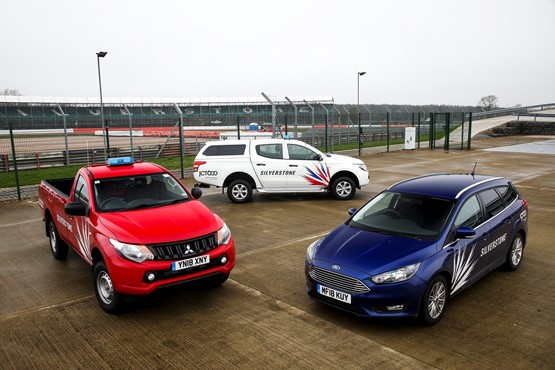 General repairs and servicing arrangements are managed by an in-house fleet assistant, while suppliers are kept engaged with quarterly reviews, where any issues are raised and also vehicle requirements are considered ahead of annual budget meetings.

One of the most important roles for the fleet at Silverstone is related to safety, as vehicles will be the critical platform for first responders in the event of an incident.

Track safety equipment is carried by single cab pick-ups, acting as fire tenders and emergency response. Every corner on the circuit has a fire tender when the track is live, totalling 18 vehicles.

In addition, the fleet includes crew cabs with Truckman tops that are used for carrying stretchers and cutting equipment.

Although they carry out a number of specialist roles, the vehicles themselves are standard models without modifications.

Firefighting equipment is transferable, with Silverstone ensuring that any new models have the right size of flatbeds.

Thomas adds: “We buy the base vehicle and make sure it fits our equipment by providing the measurements.”

For visibility, vehicles may be fitted with additional equipment, including yellow and even blue beacons if they are needed for emergency response.

Emergency vehicles are only used on the private land around the track, so they can be fitted with blue flashing lights, which are prohibited on public roads.

It is unusual for any civilian vehicle to have blue lights, so the circuit had to confirm that vehicles would not be used on the road and provide confirmation to both JCT600 and dealers involved in delivery before they would agree to fit them.

Their use is valuable if emergency vehicles are called into action on race days, as it ensures immediate recognition from pedestrians to reduce vehicle travelling time around the site.

As part of the development of the emergency fleet, Silverstone is currently specifying new ambulances and fast response vehicles that are fitted with refrigeration equipment.

These will allow them to transport drugs and other emergency medical supplies that need to be kept cool.

The fleet is currently all diesel and it uses on-site refuelling supplied by Gulf, with Thomas saying that electric vehicles are on the radar, but the timing is not yet right.

Energy capacity is currently being expanded across the Silverstone site, as it is adding new leisure facilities and an experience centre from 2019.

Thomas says: “EVs make sense, but there is a question over how we get there. I think it is an issue for the whole industry.”

Among his fleet buying responsibilities, Lee Thomas acquires some of the most desirable – and quickest – cars on the planet.

Funding is usually through hire purchase and the fleet is 10 years old, with vehicles typically doing 6,000 miles a year.

Thomas says: “They are kept to a very strict maintenance regime, with frequent changes to brake discs, oil and tyres.

Parts, including the discs, are also uprated and because we keep them so well, they remain in good condition and reliable.”

Aston Martin recently announced it was making the Silverstone circuit its home for testing and development, with the opening of a new test centre.

To celebrate the arrival of Aston Martin at the circuit, Silverstone has purchased a full fleet of the brand new V8 Vantage sports car.

Seven of the 510PS, 4.0-litre twin turbo sports cars that can reach 60mph in 3.7 secs are now available for driving experience customers.

Z-Cars and movie stars to celebrate at Silverstone

The UK will stage its first-ever BMW ‘Z-Fest’ at this summer’s Silverstone Classic powered by the AA (20-22 July).

Following Ferrari’s record breaking parade of Ferrari cars, all of the necessary evidence has now been submitted to be officially ratified as a Guinness World Record.

JCT600 has won a contract with Silverstone to supply its fleet of track, safety, security and catering vehicles.