Monica Guise explains how the University of Birmingham’s fleet will soon be 40% electric or hydrogen – a year ahead of its target.

The target was driven by environmental and air quality concerns, plus access to funding.

Only a small proportion of its fleet was zero emission at the time and it had experienced a range of teething problems with its first electric vehicles (seven MegaVans from French manufacturer Aixam, which it adopted in 2010).

But Monica Guise, whose role then was post, portering, transport and interim sustainable travel manager, was buoyed by the fact that leasing rather than buying the vehicles outright had become viable, thereby removing the maintenance and residual value risk.

The technology had also moved on from her earlier experiences (thanks to the introduction of the Renault Kangoo ZE and Nissan e-NV200), and would continue to develop.

Her faith has been rewarded, as when the university takes delivery of its next batch of e-NV200s (expected next month), it will hit its 40% target.

Guise, now head of sustainable logistics, admits to being surprised at reaching the target more than a year earlier than planned, but believes it’s due to greater acceptance of the technology. 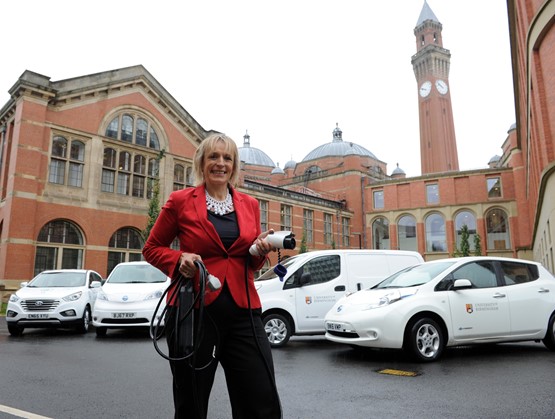 “The departments come to us to procure their next vehicle,” Guise says.

“At first it was me saying, ‘electric vehicles are your first choice, you have to tell me why you can’t have an electric vehicle.’ That doesn’t have to happen now. Electric has naturally become the first choice for most drivers.”

She acknowledges that switching to pure electric isn’t yet possible for some fleets and that the university has been able to run EVs because they are mainly used around campus.

“We’ve got the perfect profile because our vehicles don’t travel far – our average mileage is 8,000 miles a year,” Guise says.

The vehicles are used by a wide range of staff, including IT, maintenance, grounds and gardens, postal, transport and catering.

The e-NV200 is the mainstay of the electric vehicle fleet but the university also operates a Citroën Berlingo Electric, two Polaris Gem utility vehicles, a number of hybrid cars, and a Nissan Leaf, which joined the fleet last year as a pool car.

In 2016, the university became one of the first organisations to take delivery of the Hyundai ix35 hydrogen fuel cell vehicle, which is used across the city to manage services and deliveries. It also has a Microcab, which is used for research purposes.

Hydrogen is viable as the university has its own hydrogen fuelling station on campus (as well as a number of EV charging points).

“Hydrogen has lots of potential in the future for bigger payloads and longer distances so it’s something we’re working to drive forward,” Guise says.

“We have the centre of hydrogen technology at the university and we work with the researchers.”

The pressure on the university to ‘go green’ is increasing as Birmingham has been mandated by the Government to introduce a clean air zone (CAZ) by January 2020 in order meet legal air quality limits.

It is one of five cities (the others are Derby, Leeds, Nottingham and Southampton) ordered to do so although each is taking a different approach, within the Government’s framework (see fleetnews.co.uk/air-quality-map).

It is estimated that poor air quality is responsible for up to 900 premature deaths in Birmingham each year.

The two pollutants causing most concern are nitrogen dioxide (NO2) and fine airborne particulate matter (PM2.5).

Birmingham City Council is proposing that the most polluting vehicles should pay to enter the city centre (all roads within the A4540 Middleway ring road).

The council recognises that businesses and organisations may need travel planning support to review fleet vehicles and deliveries, and to help staff change their travel habits. 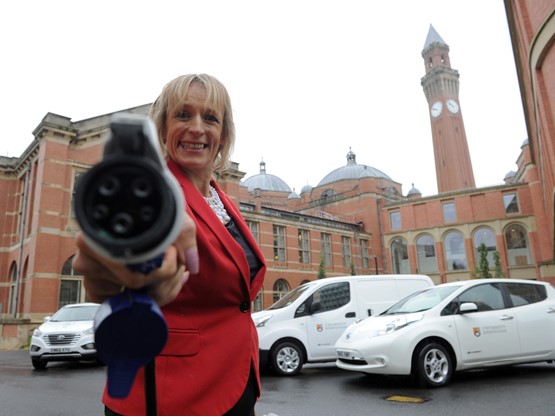 Guise has been meeting with the council to review the university’s own fleet (she has identified six vehicles which won’t be compliant with Birmingham’s CAZ) and, in her role as head of sustainable logistics, to look at the air quality, congestion and car parking challenges across the university site and the local area.

The university has 35,000 students and 8,000 staff and is Birmingham’s third biggest employer, behind the NHS and Birmingham City Council.

“As the city looks at reducing emissions and improving air quality, there is a lot of pressure on us to influence how people get to work and how students get to us,” Guise says.

The university has its own train station, which was built for a footfall of around 750,000 people a year. Currently, it gets 3.5 million so the area is, says Guise, “hugely congested”. That number could grow to 10 million in the next decade.

The university is looking at park and ride schemes and wants to reduce the number of single occupancy vehicles commuting to campus.

It also has two foldable Brompton bikes to enable staff to use the train and cycle to their destination instead of driving.

A car salary sacrifice scheme was launched in 2014 to tackle grey fleet use and there are currently 32 employees signed up.

The university lowered the emissions cap from 120g/km to 75g/km last year to take account of the Government changes to optional remuneration arrangements (OpRA).

The sustainable logistics department is also responsible for hire vehicles. When a sports event takes place, for example, it may hire 20 vehicles in addition to its permanent four minibuses.

The university recently hosted the World University Squash Championship, which meant the department arranged for the collection of delegates from different UK airports and the movement of equipment.

When a university open day takes place it manages the park and ride service as well as traffic flow.

This work extends to the university’s campus in Dubai where Guise recently had to organise all of the bus services.

“There is no hiding when a fleet manager has managed to reduce the emissions on their fleet but actually hires or taxis have increased.

"We have to be completely transparent and that’s good because we can look at trends and we can see what influences any troughs or increases throughout the year, and we can start to actively manage that.”

Of course, there are times when emissions can rise through no fault of the fleet manager – take the NEDC correlated figures, which have meant CO2 emissions have risen by 10% on average.

As the university changes around 20 vehicles a year, Guise expects an impact and she will need to explain the circumstances to stakeholders.

She is also mindful of emissions from suppliers. “We’re doing a lot around sustainable procurement, influencing how our suppliers deliver to us and also dictating in some ways what day, what time, what corridor into Birmingham they’re going to take,” she says.

“We understand we have a huge impact on the city and we have to therefore take responsibility for that.”

Ultimately she would like the university fleet to be entirely electric but her challenges are infrastructure and large commercial vehicles.

“We’d hope we’re fully EV by 2030 but that all depends what is going to come out,” she says. “We’ve reached the point where everything is electric that can be. To get to 50%-60%, we need the technology to catch up.”

leading by example – and liftsharing

Monica Guise says she has had to “skill up” to become head of sustainable logistics at the university.

She now has an MA in Leadership and Management from Coventry University.

Her dissertation looked at how an organisation’s corporate values influence and impact the behaviour of its employees.

She does that by using public transport, where possible, and has joined Liftshare.

“I would never have dreamt two years ago of liftsharing, but I now liftshare with two other people coming into work,” she says.

“It means I have to organise myself. The reason for not car sharing is you don’t want to share your space with anybody, you don’t want to feel like you have to leave the house at a certain time. Just like electric vehicles, we list all these reasons why we shan’t do it, but actually you’ve got to take the barriers down.”

Telematics proves its worth

The university’s entire fleet is now fitted with Quartix telematics after three years of negotiation with the unions.

“We kept driving on and we got there,” Monica Guise says. “For us it was about health and safety. We have students walking around campus with their earphones on and looking at their phones, and it is a challenge for the drivers. Telematics gave them more confidence so we can see the speed they’re going at if there is a complaint.

“To date, we’ve only had two complaints where we’ve had to check telematics and in both incidents it’s worked in the driver’s favour. It’s supporting the drivers and also supporting the business so we can see where they’ve been and how long deliveries will take.”

CYCLES, mopeds and electric cars are on Birmingham City Council's stand at the Motor Show to promote the Government's call for viable alternative transport. The authority has already adopted the TravelWise scheme, first launched in Hertfordshire, which promotes alternatives to the car by working with residents, schools and businesses.

Birmingham City Council has launched a six-month trial of the Nissan Leaf to widen its fleet of ‘green’ vehicles.

The Government has suggested that Birmingham City Council is dragging its feet after not providing a preferred plan for improving air quality.