Panasonic: ‘We have reduced energy consumption by 70% in four years’ 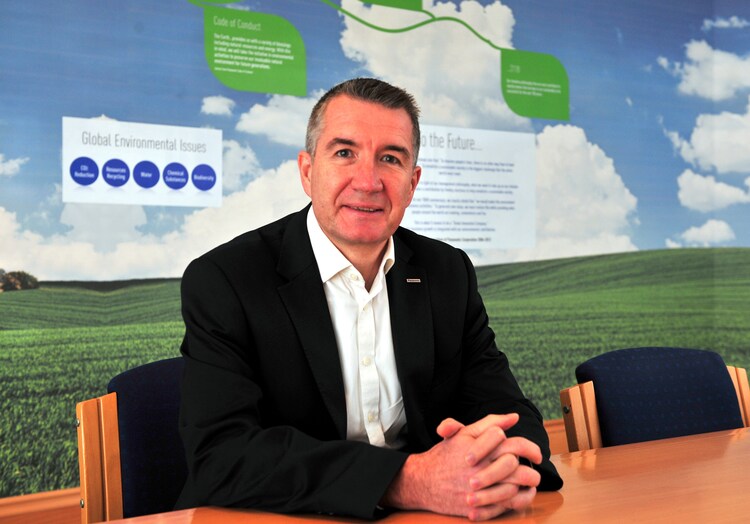 Panasonic has one overriding key fleet objective in Europe: to reduce its CO2 emissions.

The environment is a company priority – encapsulated in the corporate slogan, ‘a better life, a better world’ – and the UK fleet of 178 cars, as a significant contributor to carbon output, has its part to play.

Every March, Panasonic measures and reviews its average CO2 emissions, with the European board setting a collective target for all countries for the following year.

Jason Plummer, senior manager general affairs department, says the strategy is all about reducing Panasonic’s carbon footprint and the amount of energy it uses as a company.

“In the past four years, we have reduced energy consumption by 70%,” he says.

To ensure a continued reduction of emissions, the Panasonic fleet has a CO2 cap of 129g/km, which applies to everyone from essential user to managing director.

While Plummer admits “it is very difficult to meet people’s expectations and job roles”, the approach clearly works: in 2008/09, the European fleet’s average emissions were  more than 160g/km; today they have fallen to 121g/km.

The UK fleet of 178 cars leads the way with an average this year of between 114g/km and 115g/km while vehicles ordered since April have an average CO2 of less than 100g/km.

Although the fleet comprises 80% German badges, there are few on the order books. It’s the likes of the plug-in hybrid Mitsubishi Outlander and 99g/km Jaguar XE, together with the Audi e-tron, which are in demand and starting to bring down the emissions level.

The UK’s benefit-in-kind regime provides a large incentive to drivers to look for low emissions cars.

For example, a couple of Panasonic drivers have an Audi e-tron A3 plug-in hybrid, which has emissions of 44g/km. Tax is just £65 per month for a £38,000 vehicle. Drivers buy fuel and the company reimburses them using HMRC rates.

“There is a point where drivers can break even on petrol costs with the mileage rates they get from HMRC, so they are looking for vehicles that give more than 50 miles to the gallon,” says Plummer. “Historically, it would have been what badge they could have and how many extras they could have on it.

“The difficulty for me is keeping up-to-date with everything happening in the market. Something changes on a daily or weekly basis, especially around types of vehicle  and developments manufacturers putting  into vehicles.”

Panasonic now has nine plug-in hybrid vehicles on the fleet, which makes it cost-effective for the company to have charging points on site. It also has 208 solar panels and they generate enough energy to charge all the hybrid vehicles on a daily basis.

“That is a great story for us,” says Plummer, who himself drives a hybrid. “In effect, when I drive 15-16 miles home tonight, that power will be free. That is what we should be aiming for and we are trying to get the incentives to allow us to do it.”

Plummer believes there are enough charging points located across the UK, but that finding parking bays for electric vehicles (EVs) can still be frustrating.

“There is a smartphone app that shows there is a charging point in Waitrose  up the road, which I can plug into free while I  am shopping. It has become a lot better but could still improve,” he says.

While it has been a fairly straightforward task encouraging UK drivers to adopt low emission vehicles, it has been a different story in Germany, where the biggest share of the company’s 1,500-strong European fleet exists. There, badge matters; it is unusual for drivers not to take a domestic-brand car.

In addition, “they also want the best car they can have, so getting them to reduce CO2 has been difficult”, says Plummer.

Bandings apply, and drivers who cover high mileage are offered a lower CO2 car while those in a senior management role or commuting over short distances, are allowed to go above 129g/km, unlike in the UK.

A decision to stop providing UK staff with fuel cards has also helped the company to reduce fleet emissions – although that wasn’t the main motivating factor behind the move.

“We looked at what advantages fuel cards gave us, and we found very little,” Plummer explains. “We also found the administration of the fuel cards were very onerous.”

Panasonic now reimburses drivers using the HMRC recommended rates, and this has resulted in the unanticipated benefit.

“We have found that staff are purchasing their fuel in the most cost-effective way and we have also found that fuel economy for many drivers has increased significantly,” Plummer says.

“It is surprising how your habits will change when you have to pay for the fuel and then claim for reimbursement.”

In addition to its 178 UK company cars, Panasonic also has 60 cash takers, some daily hire cars, plus people who use their own vehicles from time to time.

The fleet is funded on contract hire to Alphabet on two schemes, traditional leased company car and salary sacrifice, which Panasonic introduced 18 months ago.

Uptake has been slow, with just seven drivers taking a salary sacrifice car, although another seven are on order. Plummer aims to have 10% of drivers in the scheme by April 2016 and says around 50% of renewals are now switching across.

He puts the slow uptake down to a lack of staff understanding of the new scheme and, in particular, a lack of trust. He also admits to his own lack of knowledge when the initiative was first launched.

“A year ago, I had to replace my car,” Plummer says. “So I looked at all of the options open to me: company car, salary sacrifice and taking the cash.

“During this process, I created a spreadsheet to work out the best financial way forward. Once I had clarified all the figures, it was clear that salary sacrifice was the right option for me.

“I had a better understanding of how the scheme works, and I could explain it to our employees. We now use this spreadsheet with all of the drivers to help them make an informed decision.”

And because insurance and end-of-life damage become the driver’s responsibility, Plummer has noticed salary sacrifice drivers treating their vehicles with more respect. “I quite like that,” he says.

Plummer and his team are responsible for property, insurance and fleet – effectively anything Panasonic buys, apart from IT.

“We did away with the role of fleet manager about five years ago,” he says. “We have a fleet administrator who looks after the day-to-day activities of drivers. But, with the support we get from Alphabet, there would be little need to have a dedicated fleet manager in the business – that has a significant cost attached to it.”

Support from Alphabet includes an online quotation tool; reporting, which falls into Plummer’s inbox every Monday; and direct communication with drivers by email and text. “That cuts out a lot of work for us,” he says.

Plummer still maintains relationships with manufacturers and meets them to “plead the case for more discount.”

He also speaks to Panasonic’s account manager at Alphabet every week and communicates with the administration support team regularly – daily, if necessary. He says good service level agreements are important to the supplier relationship, especially concerning renewal processes, communication with drivers and issue resolution. Alphabet has a complaints resolution team that looks at problems independently. “For me that works really well,” says Plummer.

He is also an advocate of Alphabet’s online service, which allows him to monitor orders going through, orders placed and drivers who have not ordered.

Where renewals are concerned, Plummer expects that, within 48 hours of his giving authorisation for a driver to renew or to set someone up as new driver, that person gets an information pack and details for logging on to the Alphabet site. The employee gets 28 days to allow them to go to the site, run quotes and ask questions before ordering.

“That is nothing I wouldn’t expect anyone else to have, it’s just a matter of having it documented,” he says.

Plummer and his team review the relationship with Alphabet quarterly. “I think you need to manage a leasing company quite closely, to make sure they understand your expectations,” he says.

To manage the grey fleet, Panasonic uses Alphabet’s AlphaRisk. The cars have to be within a CO2 limit and must be fit for purpose, so a two-seater soft top vehicle would not be permissible, for example.

The fleet administrator makes sure vehicles are roadworthy, and they are bound by the same criteria as company cars. Drivers update their service data and MOT, and verify their licence and insurance. Details of points on licences are renewed every year and the company checks for high-risk drivers, so that the grey fleet meets Panasonic’s duty of care.

For the future, Plummer expects more company car drivers will end up moving towards salary sacrifice.

“While the tax benefits are still around, it is much more financially viable than people realise – although I wonder whether the Government will review those as well,” he says.

In addition, he expects plug-in hybrid vehicles to become even more popular on both the salary sacrifice and company car schemes –  at least until a viable EV or hydrogen fuel cell car is launched.

“Until someone develops a vehicle that will do 300 miles on a single charge, or Tesla makes its vehicles a lot more affordable, I don’t think EVs will become mainstream,” he says.

“But I certainly see the development of the plug-in hybrid. Within our fleet people want  to save money but also to do the right thing  for the environment.”

Panasonic and the community

Panasonic has no need for the likes of Zipcar or Alphabet’s car-sharing scheme AlphaCity. It has a representative on a transport organisation near its head office in Bracknell and is always looking  at how people travel to and from  the office.

The business also participates in a car-sharing initiative with Waitrose and neighbouring companies such as IHS and Boehringer Ingelheim , which has 6,000 staff on site. Jason Plummer says it works, although people can have reservations about having strangers in their car.

Panasonic also has an internal, ride-sharing portal where employees submit where they are driving from and to and others within the organisation can click to ask for a lift, giving driver and passenger(s) the opportunity to share the cost. It has a good take-up.

Bracknell is an industrial area and Bracknell Forest Council also runs a number of transport initiatives. Car-free days are also under consideration.

“That would prompt people to think of different ways of getting to work,” says Plummer. “I live 15 miles away and I’ve cycled in a couple of times, which is quite an experience. Other people might car-share and then do that on a more regular basis.

“We have also looked at ways people can get into town at lunchtime. We have got bikes on site, which people can sign out to go into town. We are trying to cut down not only on commuting traffic but local traffic as well.”