Wates Group: ‘We will not accept the status quo’

Ted Sakyi was parachuted into Wates Group with a brief to oversee a root and branch transformation of its fleet business. John Charles reports 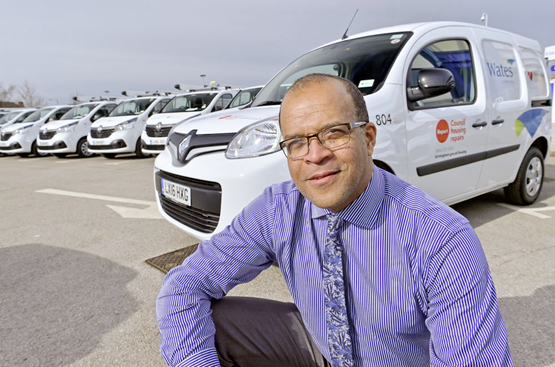 Ted Sakyi is a man who likes a challenge. And he responded to one when he took a call from Wates Group to take-up the newly-created post of group fleet manager and transform the firm’s transport operation into one of the country’s best.

Starting with a blank sheet of paper in January this year, Sakyi has undertaken a root and branch review of the entire Wates operation and created a centralised fleet department. No stone has been left unturned by Sakyi’s newly-assembled five-strong fleet team, which includes a fleet manager, two regional support fleet co-coordinators and two administrators responsible for all day-to-day fleet management.

The Surrey-based construction company, with seven divisions and 30 regional offices across the UK, had seen its fleet of 1,033 light commercial vehicles, 296 company cars and 1,300 cash allowance drivers develop piecemeal as the business expanded.

There was no national co-ordination so across different offices some vehicles were bought and others leased, there was a mix of providers and brands on the van fleet, and operatives were speccing their own vehicles.

Armed with a brief to streamline the entire fleet operation and improve overall efficiency, Sakyi compiled an action plan to implement best practice and consistency in all areas.

He tells Fleet News: “We have made significant progress and cultures are changing. The biggest challenge is always the management of change from a people perspective, so I have been engaging with employees at all levels, from the board to operatives on the frontline. Having explained the need for change and the reasons behind the initiatives, they fully understand.

“It is for the operatives’ benefit in terms of improvements in safety, comfort and drivability, and of benefit to the business in terms of cost management and reputation.”

He adds: “By mid-2017 the Wates Group fleet will be where it should be in terms of systems, processes and operations – and then we will manage day-to-day challenges.”

Confident the fleet will be a beacon of best practice – it has achieved Fleet Operator Recognition Scheme bronze standard but is targeting gold accreditation and membership of the Freight Transport Association’s Van Excellence programme – Sakyi says: “We will have the safest possible fleet and one of the most environmentally-friendly fleets in the country. The company has a reputation for quality, safety and sustainability and this will be mirrored in our fleet.

“The directors have been very supportive in backing my initiatives and I engage with the board monthly. It has been, and continues to be, a massive challenge, but I thrive on pushing myself and my team. We will not accept the status quo.”

Sakyi moved into the hotseat at Wates after more than eight years in charge of the near 1,600-strong Transport for London (TfL) fleet. In his final year at TfL, he picked up Fleet of the Year (more than 1,000 vehicles) at the 2015 Fleet News Awards and the Company Driver Safety Award (Large Fleets) at the Fleet Safety Awards.

He has worked in the automotive industry for almost 30 years, and has previously seen life from the supplier side at Arval, Lex Vehicle Leasing (now Lex Autolease) and Budget Rent A Car.

That experience helped him hit the ground running at Wates, particularly as his first task was to oversee a 10-week programme to source, equip and livery a new fleet of more than 200 vans to meet the demands of Wates Living Space Maintenance’s recent appointment to deliver Europe’s largest social housing maintenance contract.

Facing a deadline of April 1, the day the £50 million per annum contract with Birmingham City Council went live, time was of the essence (Commercial Fleet, May 2016).

Sakyi says: “It was an exceptional task that required all partners on the project to work together to source, equip and deliver the vehicles in less than three months. It was the most challenging fleet solution I’ve had to manage, working to both a tight budget and timeline to get the vans mobile and with a multitude of supplying partners.”

Nevertheless, it showed what could be achieved and now all Wates Group vans are sourced on contract hire, with maintenance packages provided by a panel of three suppliers: Alphabet, Arval and Lex Autolease.

The core fleet consists of Renault Kangoo and Trafic and Vauxhall Corsa and Vivaro models as well as some larger Renault Master and Vauxhall Movano vans, supplemented by Fiat Doblo and Ducato models.

Tough service level agreements and key performance indicators are in place with the leasing providers, with the supplier for each order chosen according to criteria that includes speed of delivery and cost.

Lease agreements have been extended from four to five years, with each van  averaging 100,000 miles during its fleet life.

While Sakyi acknowledges the arguments in favour of pay-as-you go maintenance, all vehicles are delivered with an inclusive maintenance package delivering known monthly expenditure. And, with vans being driven by carpenters, electricians, painters and plumbers, each vehicle is now ordered with a specific trade in mind and equipped accordingly.

Furthermore, a review of vehicle racking design has seen roof racks banished, boosting fuel economy. All vans are also fitted with telematics and tracking technology, with speed limited to 68mph.

Additionally, they are all equipped with reversing sensors and beepers, air conditioning, electrically-operated door mirrors and driver/passenger air bags. Forward-facing cameras are also being considered to provide video evidence in the event of a crash.

Telematics data means a safety scorecard is kept for each operative, who is kept informed at regular team talks. Since the scheme was launched four months ago, speeding violations reduced by 25%, rear damage reduced by 31% and overall accident numbers were down by 11%.

Highlighting examples of the now-standard fitting of electric door mirrors and twin front airbags, Sakyi says: “Lone drivers could not reach across to adjust the passenger side door mirror so their driving was often comprised as a result. Similarly, vans were only equipped with a driver’s airbag but frequently a passenger was in the vehicle and they should be equally safe.”

He adds: “The fleet department works with all of our project teams so we know exactly what contracts are coming up six months in advance. We can then order and specify vehicles accordingly. It is all about ensuring the right vehicle for the right job.”

Additionally, 18 drivers are taking part in a trial that requires them to complete a daily defect check on their vehicle. The process means that until a check is carried out and the report received by the Wates Group fleet team, a driver’s daily work schedule cannot be downloaded.

It is hoped the programme will be rolled out nationally by early 2017, with Sakyi explaining: “I am a strong believer in systems and processes, and utilising the right tools for the right job. Fleets can no longer work by spreadsheets and manual intervention.”

To that end, Wates Group is currently implementing Jaama’s vehicle and driver management online software solution Key2, which will become the information, compliance and admin hub of the entire operation.

Looking ahead to the introduction of the world’s first ultra-low emission zone in London, with other towns and cities set  to follow, Wates Group is assessing the  introduction of electric Renault and Nissan vans. By March 2017, up to 20 electric vans could be in operation.

An employee survey is taking place to understand travel in more detail, including home to work use, to ensure the correct location of electric charging points.

Sakyi says: “The exercise will determine whether electric vans have a place on the fleet. We expect to use them where vans travel fewer than 9,000 miles a year, and they will help the company to reduce its environmental footprint.”

Not only that: such a development would also help Sakyi reduce the group’s annual fuel bill. His target is a 15% cut over the next 12 months.

“It’s a challenging target, but procuring vehicles fitted with the latest fuel-efficient engines, ensuring operatives drive efficiently and don’t speed, ensuring vans are not overloaded and removing their roof racks all contribute to making savings,” he says.

Looking ahead, Sakyi says: “I’m less than 12 months into the job and we have made huge progress, but there remains much to do. As we gather an increasing amount of robust information from the technology we are introducing, it will help form the basis for ongoing decisions and new initiatives.”

He believes the fleet will increase in size as the business expands and forecasts a further 200 vans being added by the end of 2017.

But he adds: “We want to sweat our assets to get maximum use from them. We need information from our systems to decide what action to take. The wrong decision could cost money rather than saving it, so we need data. Fleet management is a challenging job and you must know the marketplace and suppliers. Never select services purely on price. Your suppliers are an extension of your business and should be seen as partners.”