"We are looking at the art of the possible," says Mercedes-Benz Vans' head of fleet Andy Eccles

There are no fixed rules about what services Mercedes-Benz Vans will, or won’t, supply. It’s all about meeting customers’ needs. Stephen Briers reports.

Andy Eccles is a man on a mission; one that at first glance seems at odds with the normal responsibilities of someone in his position.

Appointed to the newly-created role of head of fleet at Mercedes-Benz Vans, Eccles wants to transform the business away from a company fixated with selling vans to one focusing on meeting customers’ needs, whatever they may be.

“Do we sell a piece of metal? No, we should sell whatever the customer wants,” he says.

How does this fit in with the fundamental raison d’etre of a vehicle manufacturer to, well, make and sell vans? Does Mercedes-Benz Vans want to be a fleet management company?

“No, we are a vehicle manufacturer,” replies Eccles firmly. “But we will also be a provider of services, such as licence checks, PCN management, driver defects – everything is fair game. That’s why my role has been created.”

Eccles has been in the light commercial vehicle sector since leaving university, initially on the contract hire and leasing side, working with end-user fleets. 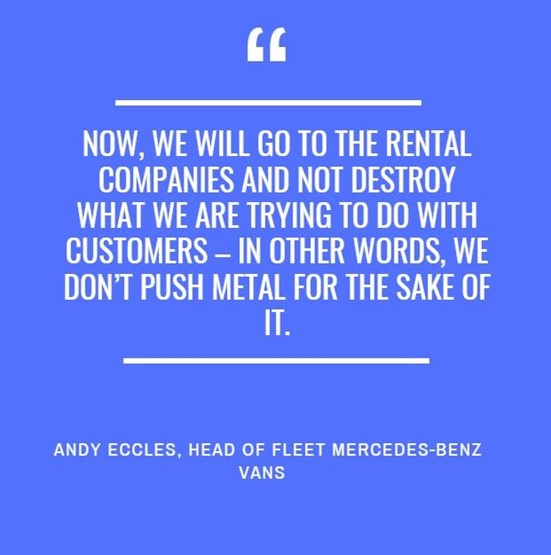 He joined Mercedes-Benz four years ago in a business development role targeting SMEs (defined as fleets with 25-250 vehicles), but also with direct sales responsibility for rental companies.

“There were relationships, but it was very transactional,” he says. “I’m more about customer relationships and meeting needs.”

His new position, reporting to MD Steve Bridge, plays to those strengths, but it’s been a while coming. Discussions have been ongoing within the business ever since Eccles joined.

“My role has been created around that. We already do it (have those types of relationships) with our larger customers but the knowledge we have doesn’t roll down to the smaller customers,” he says.

“Now I have responsibility for both. So if a company wants something other than a van, let’s work out what that is – for example, they might just need (additional) space on a Friday.”

Historically, Mercedes-Benz Vans would have those service conversations with larger fleets for the first three weeks of a month and in the fourth week it was “sell, sell, sell – everything else went out the window”, Eccles says.

“Now, we will go to the rental companies and not destroy what we are trying to do with customers – in other words, we don’t push metal for the sake of it.”

What does all this mean in practice for end-users of all sizes?

“We will say ‘give us your wish list and let’s see which ones we can tick off for you,” Eccles says. “It might be vehicle-related, it might not.

"We don’t know what they might say but at Milton Keynes (Mercedes’s UK head office) we have departments for everything, such as IT and finance.

“Some SMEs are paying a fortune to third parties; but we can offer those same services. We are looking at the art of the possible – there are no rules.” 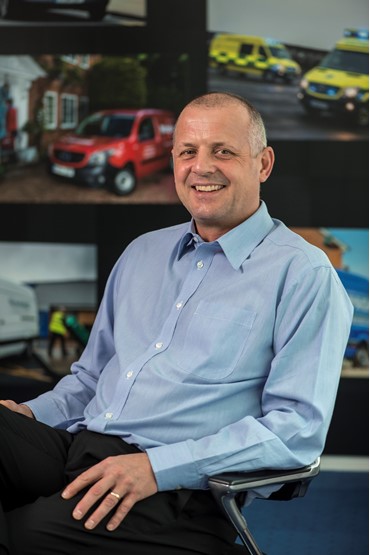 Eccles puts it another way. If a customer needs a vehicle, he will always sell them a Mercedes-Benz. However, if they only think they have a requirement for a van, “hopefully we will not sell them one if we believe they don’t need it”.

This comes down to fleet utilisation, which can only be achieved by really understanding a customer’s business. Eccles is determined to rid them of those ‘just in case’ vehicles.

For a business traditionally based on volume bonuses, this requires a complete mindset change: for Mercedes’s staff and its retailer network.

“We have teams of sales people and they are slowly being moved across to this way of thinking,” Eccles says. “It’s our fault; they are bonused on volume so we motivate that behaviour, but we are training them to sit with a customer and not push a vehicle.

“It’s a challenge but the market is changing; the way that we sell is changing.”

Ultimately, of course, the goal remains to sell vans, just when they are actually needed: “If we can start selling services such as funding (Mercedes has its own leasing business), insurance or licence checks, then when a customer needs a van, they will buy one of ours rather than another brand.”

He explains: “If a customer wants a (short-term) vehicle they will go to a rental company. Currently we don’t have the facilities to be a rental provider, but we should have the ability to solve the problem; for example, by sending the customer to Northgate. But they would have to put the customer into a Mercedes van.

“Then we become a one-stop shop for solving fleets’ problems, rather than just selling new vehicles.”

One consequence of deepening its relationship with Northgate would be a greater volume of 12-month old vans returning to market, which could prove disruptive to residuals. Eccles is one step ahead.

“We will create a used vehicle sales platform,” he says. “We will insist the vehicles come back to us to create a second-hand market.” 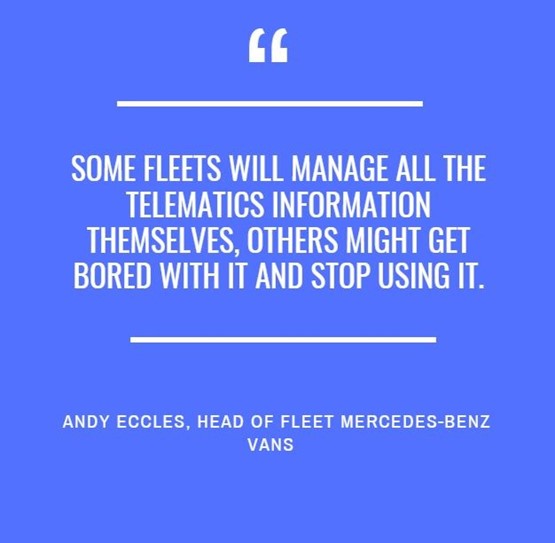 Target buyers will be franchisees of larger businesses, such as delivery operators, who might not be able to afford a new Mercedes-Benz. Once exposed to the brand, Eccles believes he will capture their future business.

An enabler to the Mercedes-Benz view of the future is connectivity. It transforms insight and understanding – of the vehicle and of drivers.

Fleets will be able to see mechanical defects, view vehicle activity, monitor routes and assess driver behaviour. Eventually, the vehicle will be able to identify service requirements and book itself into a dealership.

“Some fleets will manage all the telematics information themselves, others might get bored with it and stop using it,” he says.

“But if they tick a box, we can take it on and use the information on a consultative basis for driver performance and advice. We can be proactive with the driver and the vehicle.”

The trend away from purchasing

One-in-three Mercedes-Benz vans are now leased rather than bought, a proportion that has “grown massively” over the past few years, according to Andy Eccles.

He believes it will continue to move in that direction, echoing a broader cultural trend driven by millennials who “don’t buy any more and change all the time – they don’t even know what they pay because they want the latest technology on a contract”.

Mercedes-Benz is moving to satisfy differing demands for vehicles with Van2Share, which is undergoing trials with a handful of customers. The service consists of fully kitted vans kept at a customer’s premises that are hired by the hour on a pay-on-use basis.

“You go on the website, see a calendar and allocate the vehicle to the driver. The driver’s mobile phone will be the key to open the vehicle,” Eccles says. “They might use it for three or four hours and we bill them for that time.”

The service is intended to improve utilisation and reduce downtime. A courier might use the vehicle during the day and another business could use it at night.

The challenge is checking the vehicle prior to handover. In Germany, Mercedes-Benz is working on a solution. It has opened a drive-through defect machine at a central hub where multiple cameras photograph the vehicle and record any damage.

“Ownership could disappear,” Eccles says. “We would still have the same number of vehicles per year, they just might not be sold – we might sell the space instead.”

The pay-on-use pricing is based on leasing costs, but profit per unit for Mercedes-Benz might increase because there will be more users per van and it will be used for more hours a day. Ultimately, the cost to users could fall.