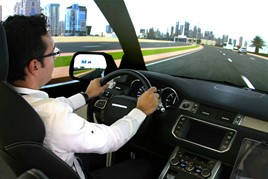 Levels of autonomy are graded from one to five, dependent on the degree to which the vehicle can drive itself, with level one being the most basic, such as cruise control, and level five being the ultimate driverless experience.

Level three autonomy allows the vehicle to undertake aspects of driving, in theory allowing drivers to take hands off the wheel and eyes off the road, but with the proviso that the driver can retake control at any moment.

The new Audi A8 is the first car to showcase this technology with its Traffic Jam Pilot, which is capable of driving the car in traffic at up to 60kph (37mph). although current UK laws stipulate that drivers must continue to maintain overall control of their vehicle.

The Law Commission of England and Wales is less than a year into a three-year review commissioned by the Government into driving laws and regulatory reforms required to allow self-driving vehicles.

However, the recently published final report of the Venturer project revealed that it is possible for a driver to take back control of a vehicle in optimum conditions – as Level 3 autonomy stipulates – but this is not necessarily a desirable approach from a safety perspective.

Peter Blackley, senior transport planner, Atkins’ Transportation, was involved in Venturer, a three-year research and development programme into the barriers standing in the way of connected and autonomous vehicles.

He said: “It takes three seconds for drivers to take back control, but at some speeds it’s taking as long as 50 seconds to regain proper control. There is a lot more work to be done on the handover of control from the autonomous vehicle to the human.”

The research found that while drivers may have their hands on the steering wheel and eyes on the road, they struggle to refocus their attention and return to their ‘baseline manual driving performance’, adding a 20% delay in reaction time compared to a manually-driven vehicle.

Incidents of less safe driving, such as swerving, and harsh acceleration and braking were higher for up to 50 seconds after taking back control.

The report concluded: “Even at speeds as low as 20mph, the planned handover task from the vehicle to the driver at Level 3 brings new kinds of road safety risk due to driver performance deficit following the resumption of control.

“A lengthier, more structured handover process is likely to be necessary, especially in the early stages of adoption, in order for drivers to regain control safely and in a manner which does not expose them to unfair liability consequences.”

The consequences of any delay in regaining control are clearly more serious at faster speeds, and one suggestion by Venturer is for an autonomous car to deliberately slow itself down before handing back control to its human driver.

The driver is in charge, but a vehicle may feature relatively basic systems such as adaptive cruise control.

New safety technology such as automatic emergency braking and lane assist systems appear at this level. The person behind the steering wheel is still fully engaged and is ready to override any of the ADAS systems.

The first major step into the self-driving world, with vehicles capable of taking full control in some scenarios. However, the driver has to remain sufficiently alert to take back control at any time.

At this level, vehicles are capable of completing entire journeys using their own artificial intelligence, although the vehicle would still have the architecture of a familiar car, with a steering wheel and pedals for times where a human still needs to drive.

These driverless vehicles don’t even need to have a steering wheel or pedals. They are the long-term goal of every manufacturer and tech firm.