Unpicking the costs of electric vehicles 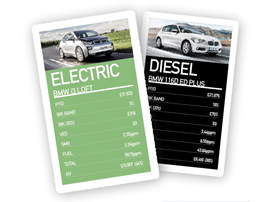 Compared with a petrol or diesel car, the drivetrain of a fully-electric vehicle (EV) is simple: dozens of moving parts are replaced with just three main components. However, buying and operating an EV does not share this simplicity.

For starters, fleets have to consider range issues, whether EVs are a good fit for their company and also potential recharging issues.

Then there are considerations over procuring them, including higher P11D prices than equivalent petrol and diesel models and the Government’s plug-in grant.

Fleets also have to take into account recent changes to the benefit-in-kind (BIK) tax regime (see panel, page 53) and the confusing issue of mileage reimbursement rates.

Then there is uncertainty over residual values, which are currently weaker than for equivalent petrol or diesel models.

Despite these issues, EVs are soaring in popularity.

Figures from the Society of Motor Manufacturers and Traders show that, in the first four months of this year, 3,148 pure EVs were registered, 103.5% more than in the same time period last year.

It is a trend Chris Chandler, principal consultant, fleet consultancy, at Lex Autolease has witnessed among fleets.

“The number of electric vehicles on our fleet has increased tenfold (to around 1,500) since April 2014 and now make up around 1% of our total fleet.

“This is a result of growing awareness among businesses and confidence in EVs and their benefits.

“There is also a wider range of models and technology now available to customers, giving them far more choice when choosing a vehicle to suit them.”

Historically, the high list price of EVs when compared with petrol and diesel models has often been highlighted as a barrier to fleet entry, even after the Government’s plug-in grant scheme has applied

Under this initiative, companies or individuals acquiring an electric car are entitled to a grant of up to 35% of the cost of the vehicle, up to a maximum of £5,000.

The grant scheme also covers electric vans. In these cases, it is for a maximum of 20% of the price of the new vehicle, up to £8,000.

In April 2013, the Government committed to retain the £5,000 car grant, which also covers plug-in hybrids with CO2 emissions of 75g/km and below, until 50,000 claims had been made.

This will take place over the next few months, and the Government says this will allow it to set the grants at a level that will support the market as effectively as possible without exhausting its budget too quickly.

However, organisations need to look beyond the high purchase price, says the Energy Saving Trust.

“While there can be an additional upfront cost (compared with petrol or diesel), this should be weighed against the many financial incentives in place to consider going electric,” says a spokesman.

Chandler also urges fleets to look at the ‘bigger picture’. “It is important to consider the wholelife cost of electric vehicles,” he says.