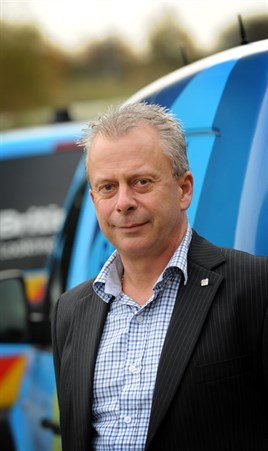 If you asked me ‘what gets you out of bed every day?’ it’s protecting the brand and our employees,” says Jon York, road safety manager at British Gas.

“We recognise that driving is probably the most dangerous thing that people do every day and the one thing we don’t want is for any of our employees, or a third party, to be harmed.”

York was recently promoted from fleet operations manager, where risk management was part of his role, to being a full-time road safety manager.

“It’s about dedicating all of my time to building on the great initiatives we’ve already got and looking at some new interventions,” he explains.

Since launching its risk management programme in 2007, British Gas has achieved a 30% reduction in its collision rate and saved millions of pounds – despite the fleet increasing as a result of business growth and acquisition. Last year alone, British Gas reduced its vehicle claims by £1 million.

The savings have been achieved by having fundamentals
in place, such as a group standard for driving on company business, driver handbooks, licence checking, risk assessments and driver training.

But it has also been about pushing the boundaries – British Gas was one of the first fleets to fit speed limiters to its vans, something which is now commonplace among major van operators.

Until recently, British Gas measured its collision rate as a percentage of its fleet size but it has switched to a mileage ratio which reflects the fact that different parts of the business cover different mileages.

York has identified that young van drivers (those aged under 25) are the most at-risk group – an issue which British Gas is addressing with its Young Driver Academy (see panel overleaf).

Data is crucial to determine levels of risk.

Drivers are allocated risk points, which result in a red (10 or more points), amber (seven to nine points) or green (six or fewer points) status.

“If you get an endorsement on your driving licence you get three risk points,” York explains. “If the vehicle has been written off, that’s six points.

“In the early days it was just a spreadsheet with some macros but now it’s a web portal to which all of our managers have access.

“The RAG (red, amber, green) system identifies the drivers that need our support and they’ll either go through driver development or a safety review.”

A safety review is an informal discussion with the driver, typically involving health and safety, fleet and trade union representatives.

“It’s an open and honest conversation,” York says. “We review the reasons why they have had multiple collisions or driving licence endorsements. Then we put them through some additional driver development and ask them to return in a month’s time and discuss what has changed.”

All new employees (above the age of 25) go on a BTEC Level 3 Advanced Driving course with Fleet Master as part of their induction. Employees that drive more than 25,000 miles a year or have two or more collisions go on a driver development course.

There is flexibility for line managers concerned about an employee’s driving to request driver training for them.

British Gas’s 4,000 grey fleet drivers are next on the training agenda. More than 1,000 are already enrolled on Business Driver’s e-learning course and will take modules on eco-driving and advanced driving.

The majority of grey fleet drivers are happy to take part.

York says: “We have one or two who say ‘why are you picking on me?’ Our response is ‘you’re claiming business mileage so we need to make sure that you’re safe’.”

British Gas has recently introduced interactive workshops to raise awareness of the risks of driving on business.

“We get a number of engineers and managers together in a room and ask them about where collisions occur and why,” York says.

“Then we run them through actual statistics about the number of collisions on motorways, rural roads and urban areas.

“A lot of people think ‘it will never happen to me’ but it might happen to you or someone you know.”

Senior managers, health and safety representatives and trade union members meet with the fleet team on a monthly basis as part of a safety governance group.

“We look at personal safety and working in customers’ homes
but road safety is a key item on the agenda,” York says.

“You’ve got to have every level of the business on board for road safety initiatives to work.”

British Gas uses a news app, as well as its intranet, to communicate road safety messages to employees.

Current communications include a winter readiness campaign called FROST (suitable Footwear, Road risks, look after Others (in particular vulnerable customers), Safety first, cold Temperatures trigger health issues) and ‘Look out for each other’ – the theme for Brake’s Road Safety Week.

All A-pillars in British Gas’s vans now have stickers to remind drivers about the need to look out for cyclists or motorcyclists that may be in their blind-spot.

“The other week an engineer said, ‘it’s a great idea because you can become complacent’,” York says.

British Gas is also fitting reversing cameras to its vans. “We need to embrace technology to assist drivers,” he adds.

He plans to roll out a vehicle checking app (which British Gas developed with Fleet Master for the Young Driver Academy) to all drivers next year.

Next on the agenda is the annual audit for the Freight Transport Association’s Van Excellence programme.

It’s the next logical step for an organisation that puts safety first.