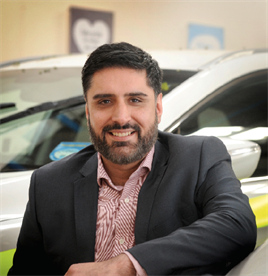 Electric vehicles: a justifiable, environmentally-aware solution or over-hyped and too costly? They may have yet to fully catch the imagination of fleet managers, but a growing number are starting to seriously consider them as a central pillar to their green strategies.

Take Interserve. The support service and construction company’s fleet policy is being driven by the twin issues of sustainability and the environment over the next few years. It is looking to reduce its CO2 emissions by 30% by 2016 compared to its 2013 figures. It is, acknowledges fleet manager Jas Dhanda, an ambitious target.

“We can’t achieve it just by providing efficient vehicles; there are other things we will have to do,” he tells Fleet News at the company’s main offices in Walsall.

Efficient vehicles may not be the sole policy, but they will never-theless play a pivotal role in achieving the goal, with Interserve putting increasing focus on electric vehicles.

It already has 20 Vauxhall Amperas on fleet which “work really well”, says Dhanda.

The company puts in some additional support to reduce the cost for the company car driver and encourage uptake because it, in return, saves on fuel and National Insurance. But they are not wilfully handed out.

“Anyone who is interested in the Ampera has to complete a mini survey, for example of journey history and their profile, so we can see if they are a good fit for that vehicle,” says Dhanda. “If they are, then they can order one.”

Interserve introduced its own reimbursement scheme for drivers using electricity at the start of the year, based on the 14p per mile advisory fuel rate for a 1.4-litre petrol engine (the figure which preceded this month’s 1p cut to 13p).

“We want to incentivise those that fit the profile to choose the car and to use it in the right way,” says Dhanda. “We estimated the cost to be between six and seven pence per mile and that’s fine because we still make significant savings elsewhere.

“It means that if drivers don’t use the electricity it will cost them more money, so we see that rate as foolproof.”

In parallel to this, the company provides facilities for charging at its three main offices nationwide creating its own mini infrastructure.

If a driver opting for the Ampera is based at another site, Interserve will consider installing a charger at that location. In total, it has eight sites with units, each with a double socket.

Dhanda also undertook research into the businesses providing sockets and leads, and sources its own equipment from a third-party supplier at around one-third of the cost of buying from the manufacturer.

“We have a charge card that is related to the individual so we can track the amount of electricity they use – we have to do this for benefit-in-kind tax but also to measure how much they are using,” he says.

“We are finding that the cars are being run on electricity for a large proportion of the time, so it’s working.”

As part of the effort to reduce emissions, Dhanda has also introduced a restricted badge policy to the main fleet, opting for Vauxhall, Volkswagen and BMW.

“They are driving our CO2 policy with the vehicles they provide,” he says. “It also helps us to control costs while providing vehicles that fit all our grades.”

Those manufacturers will also support the EV agenda; Interserve is adding Volkswagen’s electric Golf and Up, and the BMW i3 to the choice list.

Management grades also have the option of the Mercedes-Benz E-Class hybrid and Lexus hybrid models while the hugely popular Mitsubishi Outlander PHEV is also available.

As far as carbon reduction is concerned, everyone is in it together.

“The senior management set a target to reduce their CO2 and that behaviour is filtering down to the heads of department,” says Dhanda. “The policy is being driven at a senior level.”

Four years ago, Interserve’s average fleet emissions were 160g/km; today it has fallen to 118g/km.

By 2016, Dhanda expects to be close to – possibly below – 100g/km. He hopes to create a green list with a ‘green hero’ car at each grade level to provide an additional incentive.

However, that alone will not be sufficient to hit the emissions-reduction target. Arguably a bigger impact on daily carbon output will be achieved by tackling driver behaviour.

The policy ranges from questioning whether a journey needs to be undertaken – Interserve is developing software for conference calls and believes there is a lot of mileage that can be removed – to assessing driving styles.

A bespoke on-road training and coaching programme is in the process of being rolled out which will both educate drivers on efficiency behind the wheel and update their skills. It will include seasonal awareness and share with them the impact their driving style has on business costs by providing them with the financial information.

Allied to this will be improved reporting for each business unit, sharing fuel usage and poor behaviour with data taken from the TMC mileage capture system and Allstar fuel card.

Ultimately, Dhanda hopes to introduce a competitive element by producing league tables for drivers. Good behaviour is likely to be rewarded.

“The business view is that incentivising is the best way to get the message across,” he says.
The Interserve fleet of around 4,700 vehicles is split across two business units with Dhanda responsible for the construction operation, consisting of 1,250 cars, 400 vans, 60 HGVs and some 600 cash takers.

The facilities management division fleet is separate. Following Interserve’s acquisition of Initial from Rentokil earlier in the year, it is also now much larger, with around 3,000 vehicles.

However, it’s possible the two fleets could come together over the next 12 months.

The construction vehicles are all leased with maintenance, although Interserve carries out much of the servicing and repair work at its workshops in Aldridge (Walsall), Swansea and Wigan.

Each vehicle is quoted by three leasing companies to ensure pricing is always competitive.

“We analyse our quotations monthly and we find that there is a trend: on a quarterly basis each leasing company varies on its competitiveness, either due to its appetite or its borrowing rates,” Dhanda says.

“If we didn’t have that capability we’d see prices rising and falling, so it works for us.”

He benchmarks on a quarterly basis with other funders, large and small, and his figures show that the three leasing companies he uses now tend to be the most competitive.

“When I joined Interserve I looked at the providers and unravelled the costs with an open book exercise. We built up the quotations and found that our current providers had the edge both on price and the level of service we get,” Dhanda says.

He adds: “It’s the whole package of support that we want. We are into innovation and we want to know what others are doing.”

Dhanda explains: “As technology improves, so does fuel efficiency. If we kept our vehicles for longer we would lose out on these gains, so this cycle works best for us – it’s not all about cost.”