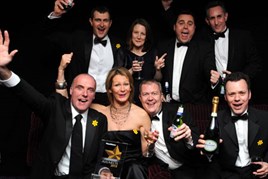 Now in its seventh incarnation and with the range roll-out continuing throughout the year with high-performance, low-CO2 and estate models, the Golf has almost become a brand in its own right and is a benchmark for all other mainstream manufacturers.

Its victory in the 2013 Fleet News Awards in a sector of high-quality and capable vehicles not only illustrates how tough the competition has become, but also how the Golf’s continued excellence has encouraged other manufacturers to raise their games.

The success of the car and the strategy behind it is not lost on Michael O’Shea, newly-appointed head of fleet at Volkswagen in 2013, and who collected the trophy at the awards ceremony in March.

O’Shea replaces Vince Kinner, a well-known face in the fleet industry and a member of the Fleet News Hall of Fame.

Before moving into his current position, O’Shea had spent three years in the fleet department and 12 years at Volkswagen.

With a previous role in product marketing, he takes a keen interest in new models and the things that set them apart from the competition.

O’Shea believes one of the key features of the Golf is that it uses the Volkswagen Group’s new MQB modular platform that will provide the basis for future models from the Polo to the Passat.

It will result in greater economies of scale for the Volkswagen brand and others in the group, and has allowed the manufacturer to increase the level of standard equipment while reducing costs in other areas important to fleet customers.

O’Shea says driving product development through the MQB platform, simplifying and rationalising the production process, has helped Volkswagen deliver higher levels of equipment as standard and to keep its high levels of quality.

Fleet News Deliveries of the Golf began in January, and although we know there was a programme to get key influencers and customers into the car at an early stage, how has it been received so far?

Michael O’Shea The Golf has been a huge success in terms of the initial reaction and now we have the GTI, GTD and Bluemotion versions joining the range. There is a huge opportunity for us, in particular with the 109g/km GTD offering a well-equipped, high-performance variant with very low CO2 emissions and fuel consumption.

FN Although it’s a completely new car, it could be argued that the Golf, superficially, at least, is a subtle evolution. Is this the right approach?

MO’S The evolution of the Golf matters in terms of residual  value performance of the car and our consistent approach. It’s a long-term strategy.

We are an engineering-based organisation that is able to invest. It benefits the global volume of the group. Our fleet customers and the leasing companies will reap the benefits of that.

We’ve been able to reduce running costs through the improved residual values and more efficient engines. The insurance groups are lower because of the electronic safety aids. It’s an example of how you can build value into a car.