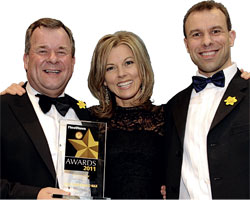 A row of Fleet News Awards trophies line the windowsill next to Kevin Griffin’s desk.

Many more lay in cabinets dotted around Ford’s Warley head office in Essex.

The company is rightly proud of its successes over the years, but never gets complacent or over-satisfied in its achievements.

Indeed, Griffin starts the meeting by questioning the judging decisions in categories where his models have not won.

It’s all amiable enough, but he can’t contain his passion for the brand; Griffin’s belief that Ford produces the best fleet vehicles is unshakeable.

Our meeting towards the end of August coincides with Ford’s fleet sales passing through the 100,000 threshold for the year.

Despite the fact the total is down 5.5% year-on-year, Griffin is satisfied, particularly as the sales mix now contains fewer short-term rental vehicles.

The company embarked on a strategy of balancing its retail, fleet, Motability and short-cycle business a few years ago.

In addition, it no longer has cars returning within six months – as Griffin puts it, “every used vehicle should be a genuine used vehicle” – while its inventory is low, an indication that Ford is not pushing vehicles into the market.

However, while the emphasis has been on improving the fleet sales mix in favour of corporate, Griffin reiterates a point made to Fleet News a year ago: “I want to be in every sector – rental, bodyshop, Motability – but the level depends on our plan and affordability.”

Fleet News: Ford has been market leader for more than 30 years, but the lead has narrowed. With the reduced rental volumes, how feasible is it to stay on top?

Kevin Griffin: We have pulled more volume out of rental this year – our market share is 15-16% now.

We have balanced out volumes, but rental is still important to us because of the volume of used cars for our dealer network. We want to maintain our market leadership.

We are comfortable with our rental volumes now as long as we are increasing our fleet business and our retail business.

FN: Ford’s Kinetic design strategy, which started with the Focus in 1998, seems to have lost a bit of its edge. How important is design to a successful fleet future?

KG: We have a clear view that we have to push harder and further into design and win business that way.

We have been trustworthy and dependable, but a Ford is a Ford so we have to push the envelope in making our cars more desirable. Kinetic design was stage one.

With Evos you can see the dramatic lines throughout the vehicle. It is visually impactful. Evos shows how far we can stretch it.

FN: Last year Ford increased prices then had to reduce them when other manufacturers didn’t follow suit. Then all the talk was about narrowing the gap between list and transaction price. Have you achieved this?

KG: We only get our volume allocation on the back of profitability, but high prices and high discounts isn’t the way to go.

So with Blue Tag we have reduced our list price and reduced our discounts – we have shifted the gap downwards by 5%. And there hasn’t been any residual value decline like some claim. Why? Because our transaction price stayed the same.

FN: Isn’t there a risk in that your strategy doesn’t take into account discounts for bulk purchases?

KG: Volume sales to one customer is a difficulty. What’s the right balance between that and buying one vehicle? We have lost some business because we couldn’t put in place the rebates that the buyer thought he deserved because they were justifying their existence on the rebate over the list price.

But we have a strategic advantage because I have an experienced team that sits opposite the corporate customer and can debate all that.

We often win back customers later as we prove we have a cost-effective package over two, three, four and five years.