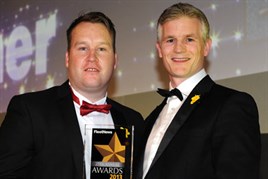 In organisations where staff use their own cars to travel on business, it must be tempting to treat the ‘grey fleet’ as something that will manage itself.

But this could lead to costs running out of control as well as leaving the company exposed to risk on a number of fronts relating to the vehicles used and the drivers.

Gareth Roberts is well aware of those risks and over a period of seven years at the Countryside Council for Wales  (CCW) and now as part of a new Natural Resources Wales (NRW) organisation, he has tackled the challenges of the grey fleet head on.

As winner of the Grey Fleet Initiative of the Year award, Roberts illustrated how, since he took over the running of CCW’s fleet, incremental changes have led to significant reductions in costs.

A detailed analysis measured every aspect of where staff were using their own vehicles for driving on business, and built up a huge amount of data.

“If you don’t analyse your data then you can’t do anything about the grey fleet,” says Roberts.

The overwhelming theme of the changes was, in his words, to treat grey fleet vehicles more like company cars and implement policies that reflected a company car fleet.

The grey fleet supported the CCW’s legacy of 107 vehicles, including 14 vans, 27 4x4s, 56 pool cars and 12 employee lease cars, before its merger to form part of NRW.

Fleet News: What grey fleet did you inherit when you began to implement change?

Gareth Roberts: There were no robust procedures in place for grey fleet. We identified 292 grey fleet drivers in vehicles whose average age was 6.6 years old – although one vehicle was 24 years old.

Records for 2004/05 showed just over half-a-million grey fleet miles were travelled, with CO2 emissions of 18 tonnes, while we paid more than £200,000 in mileage claims.

Although mileage had reduced from the previous year’s 838,000, we were travelling too many miles, in cars with emissions that were too high and spending too much money.

Many of the vehicles staff were using, because they were so old, didn’t have CO2 ratings so our calculations used DEFRA factors.

FN: So what was the next move?