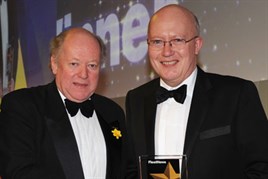 Jaguar Land Rover’s commitment to the corporate sector could have easily been questioned in the past, but a raft of new product has boosted its fleet credentials and its focus on the market.

The Jaguar XF with its fleet-friendly four-cylinder diesel engine paved the way, while it could be argued that the Evoque crossover model re-launched Land Rover as a fleet manufacturer.

The Evoque had already made its mark in the retail market, but missed out on being considered for last year’s best crossover award because no two wheel-drive option was available.

However, with a full model line-up available for this year’s awards, Range Rover’s compact model was in pole position and duly scooped the award.

It was joined on the winner’s podium by the Land Rover Discovery, which was named best all-round 4x4.

It manages to achieve a winning balance between a hard-working four-wheel drive vehicle, which is fit for almost any fleet role, and a comfortable seven-seater.

However, Jaguar Land Rover’s corporate sales general manager, Jon Wackett, says the manufacturer has no intention of resting on its laurels.

“My focus and that of my team is to make sure that we are represented in the corporate market,” he says.

“We have now put the investment in place in terms of people and resource to ensure we can unlock the opportunity it offers to both Jaguar and Land Rover.”


Fleet News: How do you intend to build on the sales success enjoyed by both brands over the past year and cement your place in the corporate sector?

I was asked to develop a strategy to address the current market, but at the same time ensure we kept a focus on Jaguar and a focus on Land Rover, while acknowledging there are different sections of the market that require slightly different approaches.

We recognised that as we bring new products to the market it’s important to get them established on policy lists and that means the team we now have in place making sure our products are reflected within various businesses, intermediaries and contract hire and leasing companies.

We need to be preparing ourselves for growth with 40 new models coming to market over the next four to five years.

FN: How does this approach differ from the way you’ve done things in the past?

JW: You could argue that we haven’t had a consistent approach in the past, but what we’ve done over the past few months now ensures that we will have the consistency we need to build on our success.