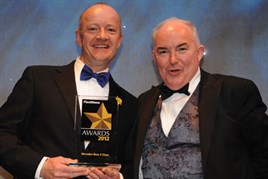 It’s many years since Mercedes-Benz has appeared in the list of Fleet News Award winners, but in the 2012 awards the C-Class was judged to be a better proposition than the pre-2012 BMW 3 Series, Audi A4 and other rivals.

The reason behind it was a facelift that was the most extensive ever for Mercedes-Benz, combined with strong residual values and much-improved fuel consumption.

However, it was also indicative of changes at Mercedes-Benz in how it tackles the market and competes with its German rivals.

Nick Andrews, who joined Mercedes-Benz from Seat just over a year ago as head of fleet, was happy to collect the award that demonstrates the car is a far more competitive and desirable product for business users than in the past.

But he also has serious ambitions for the Mercedes-Benz brand in the UK fleet market, and the C-Class’s win could be a glimpse of the future as Mercedes-Benz prepares to launch a range of products more attuned to the needs of user-choosers and fleet operators.

“As a proposition for the fleet market, Mercedes-Benz – until the introduction of the A-Class – has been playing catch-up,” says Andrews.

He is confident that from now on, the brand will be competitive on product and in how it deals with fleet customers.


Fleet News: The C-Class has been around for a little while in its current incarnation, but was boosted by major changes in 2011. How have these changes improved how fleets regard the car?

Nick Andrews: The UK market is unique in using CO2 as a basis for personal taxation and Mercedes-Benz in Germany has been working in partnership with us to provide a proposition that really works for our corporate customers.

The range now has reduced complexity, while the Executive SE and the AMG Sport derivatives would be of particular interest to fleets.

The Executive SE is a value proposition for a minimal uplift in price.

We recognise that company car drivers like to be seen in something that looks good, and the C-Class delivers that now.

We still have the option of the traditional grille because we don’t want to alienate customers who prefer this appearance on the C-Class.

From December production we’ve been able to offer the 109g/km C220 CDI, which is the standard version of the car rather than a special low-emission derivative, and better than competitor models.