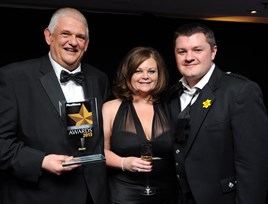 FN: How did you ‘sell’ the new telematics system to your drivers?

SH: The provider, Masternaut, was very good.  It produced a driver handbook with us that explained: ‘It’s not big brother watching you.

Yes, the company wants to know what’s going on but it’s not a stick to hit you with. It’s a cost saving tool because we can look at fuel economy better and look at maintenance.

It’s a tool to re-educate drivers. The system produces a monthly league table and we love a bit of healthy competition at Rhodar. No-one wants to be bottom of the table.

FN: What are your future plans with the fleet?

SH: We’ve got a lot of commercials to renew so I’m looking at the various manufacturers at the moment. We’re going to expand our driver assessments to include online risk assessments.

I would like to think we will achieve the FTA’s Van Excellence this year as we’re ready for it. The chief executive and I are also going to look at whether we can work that little bit smarter.

That might be car sharing, using public transport and route planning. We’re going to evaluate it and come up with a procedure or policy and communicate it in due course.

I don’t want to go too mad because we’ve had so much change and I want to let things settle.

Board level support has been crucial to Rhodar’s success.

After winning the Fleet News Award, Haigh was called into the main board meeting and personally thanked by all of the board members for the hard work.

He also received a handwritten letter of appreciation from the chief executive.

“That was nice because not all companies appreciate fleet,” Haigh says. “We are a support service rather than a revenue generator.”

But the Rhodar fleet certainly shows the value of having a good fleet manager.