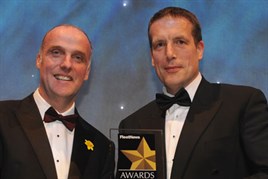 Police fleets are usually at the forefront of adopting more efficient practices, according to Richard Flint, and he has been responsible for implementing many.

During his time as head of transport at North Yorkshire Police he has written a new policy on the use of vehicles to help reduce risk.

He has helped reduce fuel consumption – measured by a cut in the total amount in litres used – and as a result the carbon output has fallen by more than 200 tonnes a year.

Accident rates have been reduced with departmental managers given a role in following up incidents, as well as through introducing parking sensors and reversing cameras on fleet vehicles.

As well as responsibility for transport at North Yorkshire Police, he has recently stood down as chairman of the National Association of Police Fleet Managers (NAPFM), which, as a body, is responsible for around 48,000 vehicles.

It has been pivotal in sharing best practice among police forces in the UK, but as Flint now has more time to focus on local matters he reflects on some of the force’s achievements to date in improving efficiency and utilisation, as well as some of the challenges that lie ahead.

Fleet News: It seems strange that police fleets are relatively late in adopting wholelife costs as a basis for selecting vehicles. How difficult was it to introduce such a fundamental change?

Wholelife cost calculation is something of a late developer in the public sector, and police forces tend to be the leaders when it comes to adopting new practices.

Wholelife cost is something that has been used in the private sector quite a lot and we’ve adopted it in the police service for a few years now.

We introduced it in conjunction nationally with the NAPFM and the Home Office.

The majority of vehicles bought from the Home Office are on a wholelife cost basis and we’ve moved away from choosing purely on the basis of the lowest price.

Comparing wholelife cost should be the basis of choosing any asset, not just vehicles. It was something we had to make a case for with the force and the police authority.

It might involve investing more money which could seem difficult to justify in times of austerity but it results in a long-term saving.

It was accepted that wholelife costs was the best way to go, and we were fully supported in it.