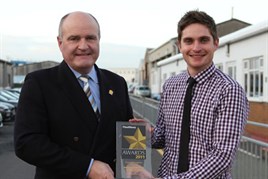 Hugh Cole makes a mental note every time he jumps into his car: “I say to myself ‘today I’m going to drive the best I’ve ever driven’,” says the fleet director at Balfour Beatty Plant and Fleet Services.

It’s a mantra he has adopted ever since he took the organisation’s driver development course last year when he was a newcomer to Balfour Beatty.

The pre-requisite to the course is an online driver risk assessment (the Driver Risk Index) which is based on psychometric principals.

Cole does more than 25,000 miles a year and was deemed high risk so he went on a full day’s course consisting of classroom-based and on-the-road training.

The organisation also has three simulators – a static car simulator in Derby, a mobile truck unit and a static truck simulator in Scotland – which can be used to train high-risk drivers such as young drivers.

Training is an important part of the group-wide aim of achieving ‘Zero Harm’ this year. Zero Harm (which launched late-2008) means no seriously disabling injuries, no long-term harm to health and no fatalities to the Balfour Beatty workforce, sub-contractors or members of the public.

The Plant and Fleet division, which operates about 5,000 cars, 3,000 vans and 600 HGVs, as well as sourcing vehicles for other Balfour Beatty businesses, hasn’t had a reportable accident since January 2011.

Its deadline for achieving Zero Harm coincides with the Olympics.

“My original career was in the coal mining industry so I know health and safety is very difficult to manage,” Cole says.

“Zero Harm is the best device I’ve seen to get people to think about health and safety and I think the commitment from everybody in the business is there. It’s so much more than a marketing exercise.”

Head of driver risk Robert Lindsay agrees: “It’s not just a way of encouraging people from a top-down view. It empowers individuals to identify what they feel is unsafe.

"They can turn round and say they don’t want to do a three-hour journey because of Zero Harm.”

Fleet News: How did Zero Harm come to fruition?

Hugh Cole: Before I joined Balfour Beatty Plant and Fleet Services, five fatal risk groups were set up – one of which was driver risk. The groups included people from different levels in the business and tried to determine the best methods of working to reduce risk.

Robert Lindsay: We tried to make sure we covered off every possible eventuality in terms of the risk of fatality or serious injury. There were various different initiatives we looked at such as incentive schemes and poster campaigns. Simple things like campaigns around using your mobile phone while driving can be quite powerful.

FN: Tell us about the simulator courses.

RL: There are a huge number of courses. You can use the simulator for really specific courses such as foreign lorry drivers learning to drive on the opposite side of the road.

ou can put people through an intense hazard awareness course, where they experience 10 to 20 hazards in 10 minutes, without them suffering any injuries if it goes wrong.

There’s a specific young driver course for drivers under 25, looking at risk factors associated with young drivers such as high speed.