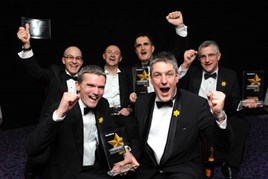 Although his return to the UK fleet operation is a recent development, Hollins has extensive knowledge and experience at Ford.

He worked for former fleet director Mike Wear in the late-1990s when helping to establish the Ford Direct approved used vehicle network.

He’s been with the company for 28 years, most recently as director, product marketing, Ford of Europe.

As fleet director, Hollins has big shoes to fill. Griffin, a member of the Fleet News Hall of Fame, was highly respected and well-known in the fleet sector.

He steered Ford through some tough times to strengthen its position in true fleet to such an extent that it is now the sector leader.

It’s Hollins’s responsibility to continue that growth trajectory in both the car and van markets.

Fleet News: Moving from product marketing director to UK fleet director could be seen, at best, as a sideways move. What attracted you to this role?

Phil Hollins: I spent 10 years at Ford of Europe; it’s important to stay in reality with the day-to-day market.

The operational nature of the job means you can get out of touch otherwise. There was also the geography: I was commuting to Germany but my family is here in the UK.

I did work in fleet before, in 1993 when Mike Wear was fleet director, so it’s an area I understand. This role is about two things: product and people. Get those right in fleet and you will be in a good place.

FN: So far this year the figures from SMMT show you are down in fleet year-on-year. Presumably this wasn’t part of the plan?

PH: The problems at Genk haven’t helped with supply: the order to delivery time for the Mondeo is still around three to four weeks on top of the usual 12 weeks.

Fleet should be more predictable than retail so we measure as much on our order bank as our sales figures.

We compare now and the next three months in each channel .