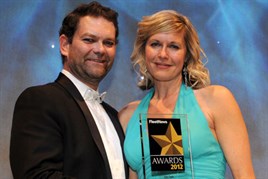 Arval puts education and training at the heart of its approach to fleet safety, employing a raft of initiatives aimed at driving down risk.

It has developed its own in-house road safety programme called Drive4Life, which is tailored and delivered to hundreds of Arval employees each year by fleet and road safety manager Tracey Scarr.

The programme raises awareness of the harsh realities of poor driving and gives employees - whether driving is a core function of their role or not – the tools that they need to reduce their road risk.

Scarr says: “There are many different aspects to making a sustainable safety programme, but whatever measures you introduce must be right for your business.”

Operating a car fleet of more than 300 vehicles, Arval has employed a combination of training, intervention and robust fleet management policies which continue to pay dividends.

It has set Key Performance Indicators (KPIs) to measure incidents, at-fault accident ratios and driving licence profiles, enabling it to track improvements and measure its effectiveness.

Parking, manoeuvring and damage while parked made up 43% of those incidents in 2007, but as a result of targeted training they had dropped to just 11% within three years.

Scarr says: “Through post crash investigations, continued driver education and driver training, where necessary, we have been able to demonstrate a significant improvement in the employees’ awareness of safe driving techniques and practices.”

Fleet News: Do you think safety needs to be embedded into the culture of a company to realise success?

Tracey Scarr: A business can introduce a range of measures that will have an impact on safety and not have it embedded into its culture.

However, I don’t think that it can be sustainable and it certainly won’t give you the long-term success you’re looking for if it isn’t.

For us at Arval, safety has to apply to everybody, not just those people who drive for work, and it has to come from the top – boardroom buy-in is crucial.

It isn’t just about somebody who drives a van or a truck, or a car for 30,000 miles a year; it’s about everybody we employ.