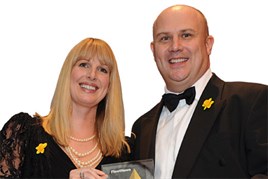 Companies have been guilty of “cutting corners” by not putting drivers through on-the-road training, says Richard Hill, managing director of Peak Performance.

“In order to address the problem you’ve got to tackle it head on,” he says. “Drivers are having accidents out on the road and you need to physically train those drivers.”
Some companies have been taking “a one-dimensional approach” by only opting for risk assessments and e-learning, according to Hill.

But he acknowledges that it is not necessarily because fleet operators don’t want to do training.

“While many organisations would like to put their drivers through either workshops or in-vehicle coaching they simply don’t have the budget,” he says.

“In an ideal world we’d deliver in-vehicle training to pretty much most employees because everyone is at risk when they get behind the wheel.”

Peak Performance has been training drivers for more than 20 years and works with a range of fleet sizes from five vehicles up to thousands. Clients include BT, Orange, Severn Trent, HSBC and RBS.

“We have a history that demonstrates that we train drivers in the right way and we leave a legacy of safe driving,” Hill says.

Clients typically reduce their accident frequency by 25% and costs by 25%.

The company offers more than 40 courses and services including policy guidance, online driver assessments and e-learning solutions, workshops and on-the-road courses. The driver safety awareness workshop called ‘All of A Sudden’ is the most popular option. The workshop looks at common causes of accidents and how they can be avoided.

Behavioural-based coaching is the most popular of the 20 different in-vehicle courses. Drivers are first risk assessed using the Fleet Driver Risk Index (developed by Cranfield University and based on psychometric principals) and then, depending on their results, complete the Driver Metrics behavioural-based in-vehicle training.

Almost 100% of drivers are satisfied with Peak Performance’s in-vehicle courses and it boasts a number of awards – six from Fleet News since 2002, as well as a Brake Fleet Safety Forum award this year.

Fleet News: How is Peak Performance different to other providers?
Richard Hill: Our strapline is ‘Better Driving’ – we feel that an experience with Peak Performance will make you a better driver. The bulk of our competition almost sell on the fear factor – you’ve got to do this otherwise you’ve failing in your duty of care. But to get real change in drivers you need to engage them in the process. It’s a much more positive message.

FN: You have some long-standing customers – one has been with you for 16 years – so how do you keep their driver training programmes fresh?
RH: We introduce new courses that complement the previous year’s training so that it’s further development for the driver whether that is focusing on individual driver concerns or more commonly-held issues like reducing fuel consumption. In the past year we’ve introduced nine new courses because the courses are relevant to the market and where the market is going.
For example, fleets across the UK are very conscious about the cost of fuel and we’ve developed a new workshop called ‘Fuel for Thought’. It’s a combination of theory and practical training, focusing on safe and fuel efficient driving. We launched that about 10 months ago and since then participants are seeing an average reduction in fuel consumption of 13%.

FN: Some fleet managers pay Advisory Fuel Rates and don’t see the point of sending drivers on an eco-driver training course – what would you say to them?
RH: There are many ways to skin a cat and we’re all in agreement that safe and fuel efficient driving goes together. While they might be paying flat fuel rates, driver training brings the benefit of driver well-being and less stress on the driver, environmental benefits and the added benefit that there’s something in it for the drivers as it’s a life skill that they can take away.

FN: What’s the most common mistake companies make when it comes to safety?
RH: It’s thinking they’ve solved the problem. The
smart part isn’t getting your accident rate down from 60% to 30%, it’s keeping it at 30% or pushing it down to 20%. But all too often you’ll see organisations that
will dip their toe in the water, see a downward reduction in accident frequency and cost, and then divert their attention and their investment into other areas of the business. Within six to 12 months the accident rate will be back to where it was. You need to continue to invest to maintain that safe culture and the downward trend
in accidents.

FN: Tell me about the tactics of some of Britain’s safest fleets.
RH: The most successful organisations establish core policies and ensure they are robust. If they see an area that’s not as robust as they want it to be they enhance and develop it. It’s about taking a holistic approach; looking at every area of risk. It’s about the managers, the drivers, the journeys and the vehicles.

Hill says Peak Performance is working closely with clients to deliver programmes which are sympathetic to their budgets while ensuring they get the greatest impact from their investment in training.

Although the financial climate is still tough, he says the company has “aggressive growth plans”. He wants to grow the business by a minimum of 20% over the next three years and is looking to raise its profile.

“We think we’re going to achieve that by focusing on the ‘Better Driving’ brand and extending our services beyond the obvious fleet drivers to spouses and areas like grey fleet. No matter who you are you can benefit from better driving.”