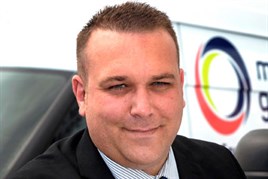 Two employees will be killed and more than 180 will be injured while driving for work, on average, every day.

It’s a shocking statistic that has led many to start to focus on the health and safety of their drivers, but for Mark Group it’s a priority that’s already paying dividends.

A leading installer of home energy saving solutions, Mark Group has reduced road traffic accidents (RTAs) despite a significant increase in both the number of vehicles in the fleet and miles driven.

Its fleet has increased in size by more than 25%, with a corresponding rise in miles driven, yet Mark Group reduced RTAs by 18% in 2012, compared to 2011.

It’s a downward trend that’s expected to continue in 2013, despite the fleet already being 21% larger than in 2012.

At the heart of developing this safety culture is Jamie Bogg, who joined the company four years ago as environmental and road safety manager.

“It’s simple really, I care about our drivers and I’m responsible for their safety,” says Bogg about his role.

“We don’t want to put our employees or members of the public at risk.”

The car fleet is a mix of job-need and perk, while the van fleet operates vehicles up to 7.5 tonnes.

Cars and vans are funded by several leasing companies on contract hire or flexi-lease, and are kept on a three-year cycle with a mileage limit of up to 100,000 miles.

Bogg says operating on such a short cycle for his vans guarantees the company has access to the safest and the most fuel efficient vehicles available, while it also ensures reliability and mitigates potential downtime.

Associated fleet services, such as maintenance and bodywork repairs, are all outsourced.

“Outsourcing is convenient, it’s less hassle and it’s cost effective for a fleet of our size,” says Bogg.

“We’ve got confidence in our suppliers to deliver the service we want and it’s worked really well for the past 30 years.”

A three-strong fleet management team, consisting of Bogg, a fleet manager and a fleet administrator, is located at the company’s headquarters in Leicester, where 60% of the vehicles are based.

There are a further 14 branches situated across the country, stretching from Aberdeen to Portsmouth, while temporary satellite sites operate according to job need.

The day-to-day running of the fleet at branch level is the responsibility of the service delivery manager, field manager and branch stock controller.