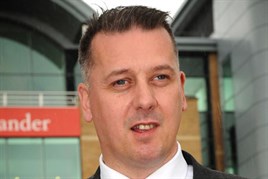 Abbey National, which operated an Employee Car Ownership (ECO) scheme, had been acquired by the Santander Group  in 2004.

At the time, Manahan was fleet manager at Alliance & Leicester, overseeing a shrinking car scheme following a decision in 2006 to switch to a cash allowance policy.

“There was no real fleet specialist at Abbey, the fleet was managed by HR,” says Manahan.

“As I was a dedicated fleet manager I was asked to come up with a fleet solution as part of the overall harmonisation of employees’ terms and conditions.”

The car fleet project kicked off in April 2009.

“It was like starting with a blank sheet of paper,” says Manahan.

“I had an opportunity to influence and recommend a solution that took into account our duty of care requirements, financial considerations to both business and employees and provide an attractive car choice.”

One of the first things he assessed was mileage reimbursement rates. “There were different rates across all the businesses so we adopted the Advisory Fuel Rate in order to treat everyone fairly,” he explains.

“It made a considerable difference to the business with regards to cost.”

Santander decided not to provide a company fuel card. Instead business mileage claims are made via an online expenses system which helps the company to collate data on drivers’ mileage profiles.

It uses the information to assess which drivers qualify to join the company car scheme based on a business mileage threshold of at least 8,000 miles a year.

Key to the new fleet policy was a desire to provide a benefit to cater for all of 28,000 UK employees, not just business drivers, so alongside the new company car scheme (Essential Business User), Santander launched a salary sacrifice scheme (All Employee Car) in July 2011.

Employees have reacted positively to the changes; they get to choose up to two cars from both schemes.

“We’ve had no issues because we’ve provided a wider benefit,” says Manahan. “There’s no additional cost to the business and it aids our staff retention.”

Currently, 250 cars are live on the Essential Business User scheme with 680 cars on the All Employee Car scheme.