Hyundai's vision of the future: 16 electric vehicles by 2025 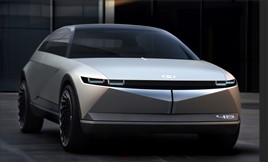 While it has become pretty obvious that zero emission transport is the future of fleet, how that’s to be achieved is far from clear.

By 2025, the company is aiming to sell 560,000 pure electric vehicles (EVs) globally per year, with another 1.1 million electrified adding to the figure. At the moment, the pure electric count sits at around 60,000 – so it will be a steep growth curve.

By that point, the brand will have 16 electric vehicles in its range – up from just three at present.

Hyundai gave a glimpse of what might be in store when it unveiled its 45 electric vehicle concept (pictured) at the international motor show in Frankfurt in September.

The company already sells the Ioniq, launched in 2015 (recently been facelifted and given an extended range), the Kona and the hydrogen fuel cell Nexo – which replaced the experimental ix35 Fuel Cell SUV.

Keen not to put all its eggs in one basket, the brand sees a place for both types of EV in its model line-up.

Hydrogen fuel cell vehicles are well placed to cater for longer range drivers, including goods vehicles, while battery electric vehicles (BEVs) are likely to cater for urban and inter-urban journeys up to 300 miles.

Yukihiro Maeda, head of cross carline (product strategy) at Hyundai Motor Europe, says: “We’re putting customer use cases at the centre of our planning. There is clear demand for each technology, and we can help shift buying decisions with our product.”

At launch, both the Ioniq and Kona models saw high demand, which led to lead times of up to a year in some cases.

Maeda says: “We’ve seen a great response to these vehicles and that strong customer demand has helped us to solidify manufacturing capacity.

“We’ve massively increased production in line with that, and though we’ve still got back orders, these are a lot more manageable.”

The new models have also improved the company’s offer in the fleet sector.

“It’s no secret we were not strong in fleet, but we can provide these electrified models that many others can’t. It’s given us huge growth, and those buyers are then looking again at the rest of the range,” he adds.

The manufacturer plans to launch a new battery electric platform 0before 2025, which will power the next generation of Hyundai EVs.

This is being created with the aim of backfilling its range to meet those 16 models, creating both smaller and larger EVs than the small family models currently on offer.

It is introducing 800v technology to allow sub-20 minute charging up to 80%, when used with infrastructure such as that on offer by Ionity, the shared ownership charging company in which Hyundai Motor Group (which also includes Kia) now has a stake.

Despite all the work to increase range and reduce charging time on its battery electric line-up, Hyundai sees fuel cells as an important part of its mobility range.

It has set out a plan – FCEV Vision 2030 – to maximise the technology.

Its truck programme in Switzerland (see panel right) is perhaps a sign of future plans.

“We can use the demand from trucks and haulage to help us build out an infrastructure for car drivers,” explains Florian Büngener, deputy general manager at Hyundai Motor Europe.

“It’s important to think holistically about green mobility,” he says.

“Data from vehicles and connected car services allows us to build a true picture of usage and look in the longer term at different business cases for technology and vehicle lifespan.”

With that information, the company can then model possible scenarios to encourage uptake, but governments need to do more, Büngener says.

“People are starting to realise they need to emit less, but are not quite ready to give up the car,” he adds. “While the credentials are great, we need the legislation to push and encourage these technologies, and make it as easy as possible for the end-user to adopt.”

He hints at the potential of the wider Hyundai group, to make use of these investments across sectors.

“We’re not just looking at electric cars, but home storage, maritime and other commercial uses,” he adds.

The company has developed a product called ‘Generator’ – effectively a portable battery, to charge electric vehicles.

Designed to support the new electric touring car championships launching next year, it is powered by two hydrogen fuel cells, which can be topped up quickly, and offer more power at a lower weight than a battery to battery transfer.

Büngener says: “It’s significantly quieter than a diesel generator, better for the environment and could be used for vehicle recovery, too.”

In Switzerland, Hyundai is about to launch the first of 1,600 hydrogen fuel cell-powered articulated trucks.

Used by three major Swiss supermarkets for deliveries, the trucks will gradually be rolled out between now and 2025.

The scale and scope of this countrywide project takes it a little beyond a trial and the manufacturer claims to be operating the programme on a commercial basis.

Switzerland operates the LSVA, a road pricing scheme applicable to all goods vehicles exceeding 3.5 tonnes. The tax
is calculated using the gross vehicle weight, distance travelled and emissions data for the truck.

The trucks are leased from Hyundai on an all-inclusive contract – programme partners include hydrogen generation – on a cost per km basis. Hyundai says the difference in total cost of ownership is more than offset by the savings from the heavy road pricing tax.

The vehicles will have seven interlinked hydrogen tanks storing 350 bar of pressurised hydrogen – found to be a good balance between range, cost, refuelling time and weight.

The hydrogen for the project is to be produced in the country at a hydropower plant, with hydrogen generation built specifically for the truck rollout.

Hyundai doesn’t currently operate its Truck and Bus division in Europe, beyond the fringes of former Soviet states such as the Ukraine, but this work leaves it well placed to enter the market with a point of difference.