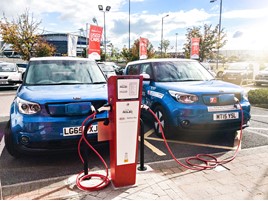 New launches and increased availability of battery electric vehicles (BEVs) next year will provide a boost to achieving the Government’s Road to Zero targets.

The strategy document, launched last year, outlines the ambition that no new conventional petrol or diesel cars will be sold in the UK by 2040, with more than half being 100% zero emission. It also wants between 50% and 70% of new car registrations to be ultra-low emission by 2030.

“Last year BEVs accounted for 2.6% of car registrations and less than 1% of van uptake, but there are promising signs. BEV sales in August were a 377% year-on-year increase (registrations 3,147; market share:3.4%), and I think the new models coming to market at scale from the start of next year will mean we will see a big increase in uptake.”

Killingley explains some of the actions OLEV is taking to help achieve the Road to Zero ambitions.

“It was great to see that announcement,” he adds.

“We will continue to push for that kind of longer-term certainty over the market.”

Plug-in vehicle grants have also been guaranteed until 2020, he says. These cover cars, vans, taxis, heavy goods vehicles and motorcycles.

Killingley says there are more than 20,000 public charge points in the UK, of which 2,000 are rapid chargers. There are also more than 100,000 charge points at domestic properties.

“There are also more at workplaces and we are working with local authorities to help install even more,” he says.

“So far we have supported 39 councils in installing on-street charging in public car parks and by adapting lamp-posts.”

Killingley says the Government is carrying out consultations for all future charge points to be smart to mitigate the impact of the mass uptake of EVs on the grid. Also, it wants charge points to be installed in all new homes with an associated parking space.

He adds: “Another thing which is particularly important is this question of how do you pay for your electricity at a public charge point?

“Do you need to have a wallet full of cards, do you rely on having apps on your phone, or can you just pay on your credit or debit card or even contactless?

“By April 2020, the Government wants all new rapid and ultra-rapid charge points to have credit or debit card payment and we are starting to see the market move in that direction, which is really positive.

“Last year’s Automated and Electric Vehicles Act allows us to regulate if we don’t see the market moving quickly enough and we will think about using some of those powers if we need to.”

Earlier this summer, the Government also announced Project Rapid, which will look at the potential for rapid charging –  50kW and above – along key routes.

Killingley says the Government is to launch a consultation on equipping environmentally-friendly cars, vans and taxis with green number plates to promote awareness of ultra-low emission vehicles (ULEVs).

The idea was first mooted by the Government last year and the special plates, which are already used by Norway, Canada and China, could be available on vehicles such as electric and hydrogen fuel-cell cars. They are thought to encourage take-up among drivers.

“The consultation on green number plates will emerge shortly, I hope,” says Killingley.

OLEV has relaunched its Go Ultra-Low campaign to include new manufacturer brands, plus several energy companies.

In order to enable the campaign to “provide a more comprehensive view of EV ownership”, for the first time Go Ultra-Low is also joining with a number of energy providers.

Centrica, EDF Energy, E.On, Octopus Energy and SSE Enterprise have all joined the campaign to “help consumers and organisations understand the benefits, cost savings and capabilities that EVs offer”.

OLEV has worked with the National Franchised Dealers Association (NFDA) to launch an accreditation scheme to show that dealers have expertise in electric vehicles.

The Electric Vehicle Approved Scheme includes a set of standards for electric vehicle retail and aftersales that have been established to ensure the automotive industry is ready to embrace the electrification of the UK car market.

The EVA accreditation is awarded to individual dealership locations that are independently audited by the Energy Saving Trust.

“This will allow dealerships around the country to show they’ve got expertise in electric vehicles,” says Killingley.

“We are also working with the Institute of Motor Industry (IMI) on developing standards for EV technicians, so that in the future people will have the assurance that there are technicians who know what they are doing with the technology.”

Seven in 10 considering an electric or hybrid vehicle

New report shows China is leading the way, with an incredible 94% of consumers considering buying an electric/hybrid vehicle.