Getting to grips with new tyre rules

Most company car drivers have only a passing interest in tyres, no matter how well their company’s fleet policy enforces regular checks.

They’d prefer to spend more time considering the design of the alloy wheels than the four circles of rubber surrounding them.

Yet all the traction control and assisted braking systems mean very little if the patches of rubber linking the car to road aren’t up to scratch.

You probably already know that. But do you know that 20% of a car’s fuel consumption is directly attributable to the tyres?

Of every five tanks of fuel you pay for, one is drained because of the tyres, mainly due to resistance through friction. That explains the proliferation of low rolling resistance tyres, now standard issue on every ‘eco’ model.

According to automotive research agency TNS, only one third of drivers in Europe regularly check their tyres for wear. Most adopt a ‘less I have to think about my tyres, the better’ approach.

This indifference is understandable, particularly from a fleet user-chooser perspective, a group that benefits from all-inclusive motoring packages.

Fleet operators, however, need to consider the safety, longevity and economy differences from one type of tyre to another. They’re significant.

A new EU directive, due to become law in October 2012, will put a label on every new tyre on sale, rating it in three key areas: noise, wet braking and rolling resistance with regards to fuel consumption.

Minimum standards must be met before a tyre is even eligible for ranking, on an A to G scale (along with the noise in decibels).

Were the legislation to come into force now, it would make an estimated 30% of today’s new tyres illegal.

Those thresholds will be raised annually.

By 2016, the standards would render a massive 70% of today’s tyres unsalable.
Michelin is part of the miscellany of tyre makers, regulators and retailers discussing exactly how the labelling will work. The latest discussions were held in early June.

Tyre labelling has little to do with telling motorists what brand will give them an extra 5mph during cornering manoeuvres and everything to do with the environment.

It’s hoped that the labels will have the same impact on consumer behaviour as a similar system adopted for white goods; if you know the slightly more expensive fridge-freezer is actually much more efficient, you’re more likely to spend the extra to save money in the long-term.

Michelin is now trumpeting the advantages of its Energy Saver tyres, which it claims are collectively responsible for saving 184 million litres of fuel since their launch in 1992.

Fleet News was invited to the com-pany’s development centre near Berlin to see the results of a series of experiments, pitting the latest Energy Saver against the equivalent eco-tyres of its major competitors.

The tests – longevity, fuel economy and safety (wet weather grip) – were conducted by independent specialists, but paid for by Michelin.

The graphs show the results in more detail; Michelin comes top in all but one of the tyre tests.

If you’re wondering why those three test categories don’t quite match the three on the labels, it’s for two reasons: first, Michelin didn’t provide any noise data and second, it’s very difficult to grade longevity.

The problem is that there’s a “one to 10 ratio tyre wear difference depending on use, tyre pressure and other factors”, according to Pascal Couasnon, Michelin head of technical communications.

Nonetheless, good ratings for fuel economy and wet braking are likely to sway fleet buyers away from the cheapest options.

As with fridge-freezers, the system should serve to drag down average CO2 emissions. Michelin claims Energy Saver tyres reduce a car’s emissions by 4g/km the moment they’re wrapped around the rims.

And so to the science. Unfortunately, the characteristics that govern a tyre’s grip, duration and fuel economy generally oppose each other; lowering a tyre’s rolling resistance means
better fuel consumption, but longer braking distances.

The trick is achieving a balance of all those positive characteristics, making sure one isn’t too far to the detriment of the other.

For example, rolling resistance is the result of an object deforming when it touches another surface, then springing back again. In a tyre, it’s when the sidewall and tread blocks deform at the contact patch, which create friction on the road surface when they ping back into shape. That deformation generates wasted heat energy.

The solution, then, is to make the tyre compound hard to prevent this movement, but that’s to the detriment of grip, which of course affects braking distances. And braking distances in the wet are also governed by the pattern of the tread, which needs to direct standing water away from the tyre, effectively ‘drying out’ the road.

Imagine rolling a steel ball and a rubber ball at the same speed across a flat surface. The steel ball has least resistance and would roll the furthest – it’s the most efficient.

But which substance would you rather have between you and the road during emergency braking?

Michelin’s solution is the top-secret recipe of its rubber compound, which uses a mix of carbon black to disperse the heat and silica (found in glass) to harden the tyre without affecting grip. Most makers take a similar approach.

It could be viewed as Pepsi vs Coke vs Virgin Cola all over again. However, the results in this ‘taste test’ provide a more quantitative comparison.

The TUV method of calculating rolling resistance, validated by the European commission, doesn’t involve a car at all. Rather, each tyre is positioned against a drum and sped up to 80kph (50pmh), all with the same inflation pressure and having been warmed up for 30 minutes prior to the test.

For each of the three types of tyre tested, 14-, 18- and 16-inch winter, Michelin came out on top in the rolling resistance tests. 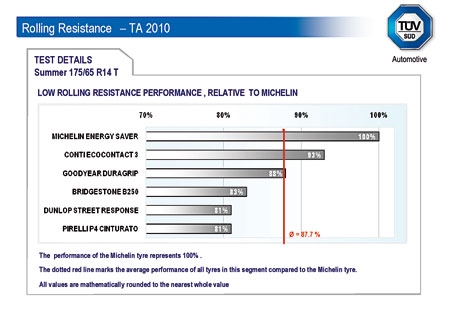 The wet braking test was conducted by TUV SUD, an automotive research and testing company based in Germany.

The graph shows the braking distances of a variety of branded competitors as a percentage of the result for the Michelin Energy Savers.

Performance is measured by carrying out an emergency braking manoeuvre on a wet track from 80kph down to 20kph (50mph down to 12.4mph) with anti-lock brakes in operation.

The car has its brake pads warmed using ‘slave tyres’ first and the same number of braking tests are carried out with each set of tyres, before calculating an average. 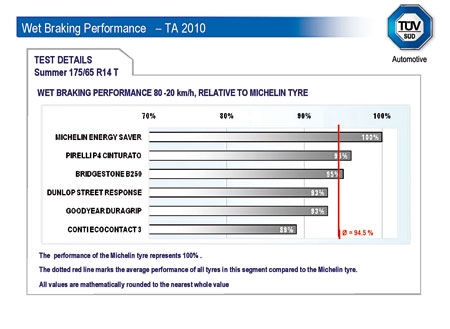 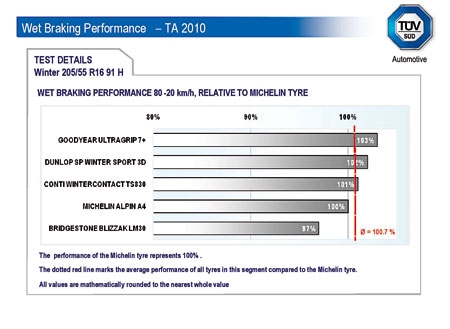 From October 2012 every single tyre on sale will be required to carry a sticker showing its rolling resistance in relation to fuel consumption, its wet braking characteristics and its rolling noise in decibels.

The first two categories will be rated from A to G, although the thresholds for each rating are yet to be agreed.

It’s not only drivers that will benefit directly from the system, but manufacturers too.

From 2012, stringent EU CO2 emissions rules will see carmakers fined per gram of excess CO2 over a set limit for every car they sell.