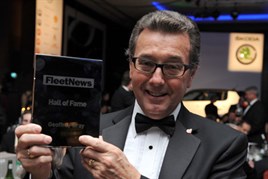 It’s 4pm, the afternoon before the FN50 dinner, in a poorly-lit Park Plaza hotel bar in London.

Hurrying into the room, he orders a club sandwich – “I’ve not had chance for lunch yet” – and we find a seat. We’re here to write a profile of FSG, which is celebrating its 25th anniversary, but also, unbeknown to Bray, commemorate his entry later that evening into the Fleet News Hall of Fame.

“I have to tell you something, but it’s confidential for now,” he starts, excitedly. “We’re about to merge with an American fleet management company.”

That off-the-cuff comment sets the tone for the rest of the interview.

The company in question is Automotive Resources International (ARI), a global fleet management business with 775,000 vehicles under management in North America alone.

Operations in Canada, Mexico, South Africa and Australia and alliances in India and China add another million vehicles. FSG will be its route into Europe.

The deal isn’t official until December 16, but Fleet News has special permission to publish the story a day early.

“We have had offers in the past but we’ve not been interested,” says Bray. “What’s different this time is the synergies: they are a family-owned business like us and we replicate each other’s businesses.”

Although the Bray family will be selling its shares to ARI, this is very much a partnership.

FSG’s award-winning RiskMaster programme will be adopted as ARI’s global offering to fleets with the company investing further in the software at its 180-employee IT centre.

Bray describes it as having “20 times the resource to deliver the services we do now”.

He adds: “ARI say they are five years behind in the USA – they see us as the leader. RiskMaster will be their worldwide brand and it will be run from the UK. All FSG staff and management still stay in their current positions.”

FSG’s Chippenham office in Wiltshire will become ARI’s European headquarters. As for Bray, who turns 70 next year, he is committed to his current role “for a minimum of five years”.

The business he established a quarter of a century ago has built an enviable reputation for quality, customer service and, above all, trust.

Bray still prefers to do business without a contract – 80% of customers do not have a formal agreement. “The old West Country handshake still exists,” he quips.

The approach clearly works; FSG is now one of the UK’s biggest independents with around 55,000 vehicles under management. And its very first customer, Dun and Bradstreet, remains a client today.

It’s a far cry from Bray’s beginnings working in a tractor dealership as an agricultural engineer, although the education he gained then has stayed with him.

“I learned that service sells tractors; it’s all about the aftersales support,” he says.

Bray set up FSG with the idea of creating a fixed price servicing chain of independent workshops.

“The concept was to have a 24/7 phone number answered by a human; to have cars collected by suppliers that we controlled; and for us to invoice the customer and pay the garage,” he says.