In the spotlight: Jaguar/Land Rover 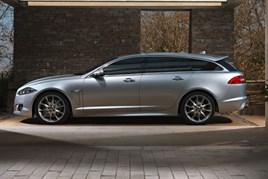 Jeremy Hicks casts an eye over official figures charting the market share of premium brands in the UK and readily acknowledges that the company he used to manage enjoys considerably more success than the one he’s just joined.

So what prompted him to spring one of last year’s biggest industry surprises by deciding to leave Audi, the brand he steered to pacesetting stardom in the UK corporate sector, to become managing director of Jaguar Land Rover?

“I took a long, hard look at both companies and recognised the fact that these are iconic brands that are now unleashed after being tied to a huge corporate organisation. I also recognised that now they are on their own, they can reach their full potential,” he says.

Then the man who spent 13 years with VAG – seven of them as director of Audi UK – adds: “There was another reason and I confess it was purely emotional.

"I just wanted to work for a British business – and there’s nothing more British than JLR.”

He says: “I agree we have a long way to go, but we can do it. This is a great opportunity.”

We’re in an office behind the Jaguar stand at the Geneva Motor Show where an audience of motoring journalists have just greeted the introduction of the XF Sportbrake with applause.

“We will grow both brands by finely honing our positioning and having a strong product line-up supported by a great dealer network.

"We are operating in a narrower band than Audi, but we have the opportunity to spread into other areas.

“That’s a journey that will require many steps and a lot of patience because we will go about it in a thorough and organised way.

"Going into new areas means new products, and our owner has committed to a significant programme of investment in new product development. Sportbrake represents the start of this process,” he says.

Its segment accounts for around 75,000 registrations a year. Estate models take a 20% share of the total and more than 50% of cars in the segment have four-cylinder diesel engines.