In the spotlight: Lex Autolease 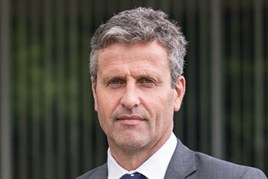 Lex Autolease, the UK’s largest contract hire and leasing company, remarkets a huge number of vehicles every year – 70,000 to be precise. And some 20,000 of those go through its two wholly-owned used car centres in Birmingham.

The decision to open those outlets nine years ago sums up parent Lloyds Banking Group’s aspirations for the business: to be an “end-to-end” provider. This means hands-on control of funding, in-life management and disposal of vehicles.

Outside the confines of Lex Autolease, the decision to appoint Porter raised some eyebrows.

Although he’d worked for Lloyds for the previous 13 years, he was new to the fleet sector.

Some leasing executives openly questioned whether this banking expert would be able to get to grips with the complexities and specialisms of fleet.

Porter dismisses such gossip. He draws clear parallels between his former position managing SME and mid-market corporate business with his new role – the customer base, he says, is the same.

“We provide funding and service management and that’s what I was doing before, just now it’s on metal,” Porter explains.

“This is also a leadership and management role and I have a team of knowledgeable staff who have been with the company for a long time. This business doesn’t need someone that knows the industry inside out.”

He joins Lex Autolease at it reaches a landmark moment: its risk fleet is in growth.

Ever since Lloyds’s acquisition of HBOS in 2008 forced together Autolease and Lex, the company has been combing its customer base looking to remove unprofitable contracts. It’s also lost a few contracts, including the Ford business.

Consequently, over that five-year period, its risk fleet size has shrunk by 103,778 vehicles, or 28%.

Now, with the protracted and occasionally painful integration of the two businesses finally complete, it has returned to growth – by 5,000 vehicles at the half-year mark.

A new business strategy was introduced at the start of the year: invest to grow.

It replaces the inward-looking ‘manage for value’ policy which streamlined the business by focusing on profit and margins.

Invest to grow signals a clear intent from Lloyds Banking Group: this is a core business worth investing in.