In the Spotlight: Mazda 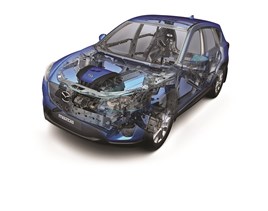 While other manufacturers grapple with making hybrid or electric technology a viable alternative to the diesel car, Mazda has ploughed a separate furrow in its bid to boost fuel efficiency and minimise CO2 emissions.

Skyactiv, unveiled to the world’s press in June, aims for industry-leading efficiency from conventional petrol and diesel engines through improving the technology of the engines themselves, as well as producing better gearboxes and lighter cars.

It will see every new car typically 100kg lighter than the model replaced thanks to reductions in engine weight, primarily by using aluminium blocks rather than cast iron, and in body weight.

The forthcoming CX-5 diesel, for instance, a rival to the Toyota Rav4, Honda CR-V and Volkswagen Tiguan, will be sub-120g/km when it becomes the first Skyactiv Mazda in summer 2012, while future Mazda 3 and 6 models will fall below 105g/km.

And there’s still much more to be done. Currently, just 30% of the energy created by diesel and petrol gets to the wheels, the rest is lost. Mazda wants to get this proportion to 60% by reducing friction loss and making lighter cars, and that’s where its investment is going.

“This technology isn’t an eco sub-brand that will attract extra cost; it will be on every new model from 2012,” says Mazda fleet and remarketing director Steve Jelliss. “It’s the Mazda approach to the environmental challenge – no price premium and no compromise.”

Once Mazda is satisfied that it has exhausted all the possibilities with current engine technology then – and only then – will it start to look seriously at hybrid.

“It has to be a compelling package and we will start to see them come into range. But it won’t be until the base technology is far improved over where it is today,” Jelliss says. “It has to be as effective on the motorway as it is in town.”

More likely is a hydrogen Mazda based on the company’s rotary engine – several concept cars are already on trial in Japan and Norway.

Rotary technology has fewer challenges to run on hydrogen, most notably no pre-ignition issues, so the investment costs are lower.

The main issue for Mazda with hydrogen is lack of infrastructure. Until other manufacturers start developing their own models in earnest there is no justification for putting a refuelling network in place.

“But when the time comes, Mazda is ready to capitalise on it,” adds Jelliss. “We’ve been testing in Norway since 2006.”

Until then, Skyactiv is the main focus for the brand, while in fleet a new sub-brand is emerging that is rapidly picking up traction.

Business Line is an equipment grade recently launched on the Mazda6 this year which is expected to sell 500 this year, with a further 1,000 in 2012 – around 25% of that model’s corporate volume.

Mazda claims around half of these sales are incremental; it isn’t simply cannibalising existing Mazda6 business.

Business Line adds items such as sat-nav and Bluetooth, described by Mazda as ‘essential business user tools’, and 17-inch alloy wheels to the standard specification and uses the 2.2-litre 129bhp diesel engine which emits 138g/km of CO2.

The pricing guides have given the brand their backing by uplifting residual values to 34-36% at three-year/60,000 miles, around 4.5 percentage points above the average for its direct competitor set and five points higher than a comparative Mazda6.

At the moment Business Line is a “toe in the water”, according to Jelliss. “If it is successful then we will consider it for other models, including the Mazda3 first and possibly the MX-5 where we do have a lot of success in the fleet market,” he says.

Mazda is tightening up on the terms offered into fleet and the type of business it does due to the challenges faced by the strong Yen in Japan, where it makes the vast majority of its cars.

Like other manufacturers it claims to be reducing the volume of business into short-term rental which reflects on a 14% year-on-year fall in total rental sales this year.

“We have to look at where we are doing business – we can’t throw money at the marketplace both for rental and support of fleet deals,” says Jelliss.

“Rental is high cost business and not affordable. We are able to be competitive up to a point in user-chooser and contract hire but we have to be careful of our offers and we have reduced our volumes. We’ve also not had any new models this year, although we have a good product future in the pipeline.”

By 2013, with a regenerated model line-up, including movements into new segments, Jelliss is confident that Mazda’s fleet market share will once again top 2%. The last time it hit these heights was 2008.

Mazda has seen a number of companies return to the market over the past couple of years after postponing their replacement cycles, but has identified a change in their priorities.
They are far more sensitive to price and CO2 emissions and that has affected sales as it lagged behind other manufacturers in launching low CO2 models.

Consequently, it has been shunted off some options lists, particularly by companies that have implemented aggressive CO2 caps, such as energy firms.

With Skyactiv, the tide will begin to turn, and Mazda is putting fleet at the cornerstone of its growth aspirations in the coming years.

“Our vision is to have fleet underpin the foundation for our growth – more than 20,000 units to contribute to Mazda going above 50,000 sales,” says Jelliss.

“Like in the noughties where we transformed our product line up, we will be in a position with our sixth-generation product to do that again and fleet will be a key part of our regeneration.”

In the short-term, he believes the SME sector will be most fruitful due to the inflexibility of larger fleets’ CO2 policies.

However, the CX-5 will be the first step along the road towards Mazda’s aim of reducing its range-average CO2 by 30% between the period 2008-2015, with a 25% improvement in fuel efficiency.

The strategy is to provide fleets with a rational reason for selecting its models as well as emotional.

“It’s true that if people test drive our cars they will buy them,” Jelliss says. “We have to provide them with a rational basis for making that emotional choice.”

Wholelife costs: “Fleets are not as focused on this as they could be, especially areas like how National Insurance is affected by the choice of cars.”
Salary sacrifice: “This is a growth opportunity as a route to individuals. We have a scheme with Tusker which could be fruitful.”
SMR costs: “In 2005 when I was aftersales director we were aware of the
SMR elements but we didn’t actively engage with our European and Japanese
counterparts of this. Now we are more sensitive to it, for example, influencing
engineers on tyre choices and parts pricing for SMR and accident repairs.”
Residual values: “We keep in close touch with the influencers and give them
exposure to current and future products.”
Growth: “We are taking business from other Japanese manufacturers but the Korean presence is growing. Our challenge is getting onto the choice list and staying on the list which is about terms and emissions. People that get the opportunity to drive our cars will consider them.”