Fitting a new tyre to a company vehicle may sometimes seem like a hassle or unwanted downtime for a fleet manager. However, the processes and influences behind that tyre reaching the fitter and your vehicle are akin to the paddling of the swan’s feet while all on the surface appears calm.

Even the manufacture of a tyre is not as simple as it might appear as the tyre industry is at the mercy three separate global influences. Rubber, steel and oil prices fluctuate independently of each other, which can make it difficult for a tyre maker to guarantee a price too far ahead.

There is also the cost of developing new technology to factor in. This will ultimately deliver harder-wearing, safer and more efficient tyres, but development has to be paid for. New innovations such as chip-in-tyre technology, the latest compounds and improved designs all require a great deal of time and testing before they reach the fitter’s shelves.

Understanding these competing factors might not help a fleet manager when choosing a tyre right now, but knowing where the market is heading will inform future policy decisions. There are some key trends emerging in the world of tyres, including greater connectivity with the car and more sustainable materials.

Here, we outline the major new trends in tyre technology. 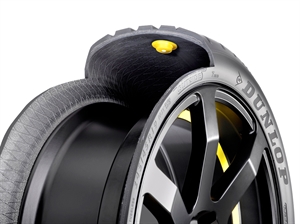 In November 2012, it became the law for all new cars to have a tyre pressure monitoring system (TPMS) fitted. This system measures the air pressure in the tyre and warns the driver if a tyre becomes over- or under-inflated.

To date, TPMS has worked by using the tyre’s valve as the monitor, complete with
a tiny battery and linked to the car by a transmitter. However, this technology is set to be superseded by the far more sophisticated chip-in-tyre system that will offer greater accuracy and a broader range of information to help the driver discern the state of the vehicle’s tyres.

One of the leading lights in chip-in-tyre technology is Dunlop, which unveiled its system at the recent Geneva Motor Show. Similar to other systems, Dunlop’s chip-in-tyre technology uses a microchip that is attached to the inside of the tyre. This does not need a battery so cannot run out of power. It is held in place by a rubber surround with a total weight of only 10g, so it will not affect a car’s economy or emissions.

The chip-in-tyre microchip communicates with the car to relay information about each tyre’s inflation pressure and temperature. Using this information, the car can fine tune its responses to give improved performance and safety.

At present, chip-in-tyre technology is being developed with high-performance cars in mind, but Xavier Fraipont, Dunlop’s director of tyre technology, believes it will quickly make its way into the mainstream.

He says: “To get better performance, we usually look at the materials used, but chip-in-tyre takes performance to the next level by interacting with the car. We are also studying how the chip can communicate with weather information to influence the car’s behaviour to optimise it for any conditions.”

While real-time communication between the tyre’s chip and its on-board systems isn’t possible yet, Fraipont believes this will be a logical next step. As the chip informs the car of each tyre’s pressure and temperature, the car’s system can adjust to give the best braking, steering and ESP stability control responses.

Dunlop is also looking at how chip-in-tyre technology can help manage the tyre throughout its life by telling the driver about tread wear and condition. This information could either be stored by the car or relayed to a fleet manager by telematics. Fraipont says this would put a fleet manager in a much stronger position and be able to order new tyres in advance of them being required rather than waiting for replacement tyres to become an urgent necessity.

More good news for fleet managers is that Dunlop, and the other tyre companies developing their own chip-in-tyre tech, believe this new system will be cheaper to fit than existing tyre pressure monitoring systems. It should also be possible for the chip to be swapped from one tyre to the next as they are replaced, further saving on cost.

The only limiting factor with chip-in-tyre technology is that it will be difficult to retro-fit to a vehicle that does not include the connected technology to communicate with the chip. Fraipont says: “We would deliver a programmed chip to the manufacturer with that vehicle’s full status installed. However, a punctured, damaged or stolen tyre would still need a chip that communicates with the car, so we are looking at how that would work in the aftermarket supply chain. All of this has to be in place before chip-in-tyre technology can be fully integrated.”