What causes collisions and how can fleets prevent them? Experts explain

Industry experts reveal the most common cause of crashes and how managing driver behaviour could reduce the risk.

Every day of the year more than 150 vehicles driven on company business in Britain are involved in a road traffic accident.

These crashes result in more than 14,000 road deaths or serious injuries annually. These collisions come with a high price for companies - in more ways than one. 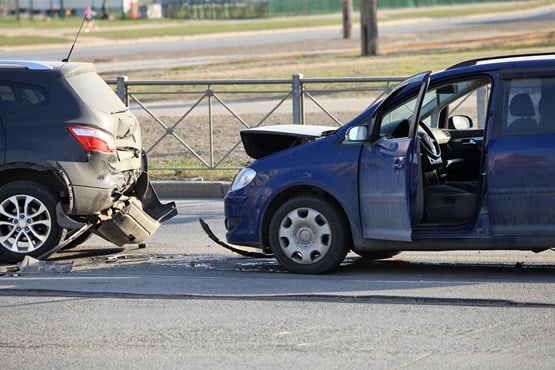 With the new Road Safety Act on the statute book and the arrival of the Corporate Manslaughter and Corporate Homicide Act in April 2008, the issue of health and safety in the workplace and particularly the business vehicle is something employers must constantly be mindful of.

And this is before the lost man hours resulting from injured employees and out-of-action vehicles, delayed delivery times, increased insurance premiums and potential treputational damage. 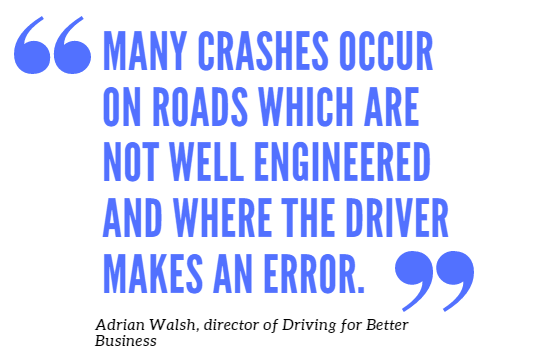 Why do crashes occur?

Adrian Walsh, director of the Driving for Better Business campaign, which is co-ordinated by road safety organisation RoadSafe, believes there are many reasons for a crash and each crash will in itself be unique.

"In Britain, we manage road safety using a safe system approachwhich is designed to compensate for human error", he says.

"We have safe cars which have systems which help to avoid a crash such as electronic stability control (ESC) and autonomous emergency braking (AEB) which reduce injury in the event of a crash.

"Mechanical failure is rare, but many crashes occur on roads which are not well engineered and where the driver makes an error.

The most common cause of a crash is when a driver or other road user breaks the law and this, coupled with a poorly-designed road, produces a lethal cocktail.

There is frequently a simple formula at work here: error + violation = crash

Paul Watters, the AA's head of public affairs, agreed with this sentiment adding: "The word accident is now out of fashion with many people preferring the word crash.

"But sometimes the word accident really does best sum up the chain of events that lead to crashes taking place.

"Those motorists driving on our roads are all of vastly different skills and experiences and that's before the condition of the roads themselves have been considered.

"And sometimes these circumstances combine to result in an accident taking place." 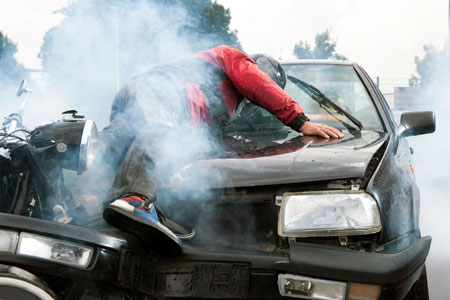 In total, 118,403 road traffic accidents (RTAs) were attended by British police officers in 2011, according to figures collated by the Department for Transport.

Of these incidents, ‘failed to look properly’ was at the top of the list for the 10 most frequently reported contributory factors. This reason was cited in 42% of all crashes.

In second place, accounting for 21% of all road traffic accidents (RTAs), was ‘failing to judge the other person’s path or speed’.

In third place was being ‘careless, reckless or in a hurry’ with 16%.

The other reasons for RTAs in descending order thereafter are: loss of control, poor turn or manoeuvre, pedestrian failed to look properly, slippery road conditions due to weather, sudden braking, travelling too fast for the conditions and following too close.

More than one-third of all these crashes would have involved someone at work, according to RoadSafe.

In addition to being a research fellow at Loughborough University, Dr Will Murray is research director at Interactive Driving Systems which specialises in advising fleets on risk management.

He attributes the causes of crashes to both the drivers and the organisations they work for.

“As far as the drivers are concerned, it’s frequently possible to break down the causes of the collisions according to the nature of the journey being made, the state of the vehicles in which they are travelling as well as the actions taken by the motorist,” he says.

“It’s often the case that driving too fast, too close and driving while impaired are all major contributory factors.

“And, within a business context, motorists often have to rush in order to meet sales targets and deadlines – among other considerations.

“When examining the causes of crashes, we typically tend to focus on who was driving a vehicle and the way it was being driven.

“But it’s often equally important to look at the culture within the organisation they’re working for.

“For example, will employees receive phone calls or emails from management colleagues while they are in motion?

“This is where a robust safe driving policy which governs what should and shouldn’t happen comes in.” 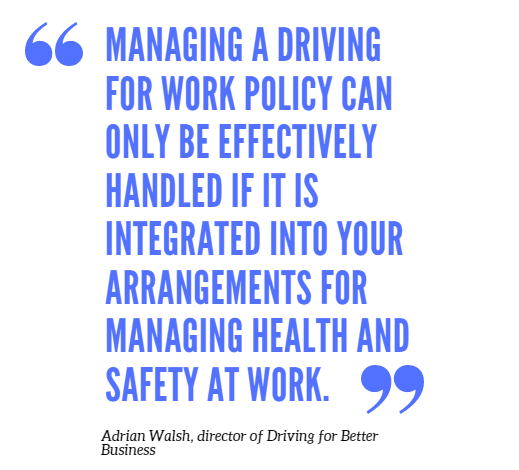 Research undertaken by road safety charity Brake in conjunction with insurance company Direct Line discovered that significant numbers of people who drive for work are texting and speeding to get their job done as quickly as possible.

The survey discovered that nearly a third of all business motorists (31%) text while driving and more than three-quarters (76%) speed at more than 35mph in built-up areas.

“We are urging all employers to ensure they have comprehensive safe driving policies in place and that staff know the importance of not speeding or driving distracted.” she says.

“We are also calling on anyone who drives for work to make a commitment to stay within speed limits, stay off the phone and focused on the critical task at hand.”

Murray highlighted the necessity for all businesses to undertake full risk assessments and then create a driving for work policy tailored to meet their individual needs.

Processes need to be implemented which ensure that this policy is adhered to while consistently ensuring that vehicles are properly maintained and driven only by appropriately qualified employees.

Murray says: “At a basic level, this process is simply good management.

“My personal belief is that the process needs to be broadened out to encompass the way in which workloads are distributed in the first instance, whether it’s by phone or email, and the amount of work that drivers are expected to complete in their shift.

“In addition, I think that organisations should actively engage with their insurers, who normally have their own risk teams, for advice and not overlook the assistance that’s available from organisations like ACFO and Brake.”

Walsh adds: “Businesses which manage the schedules of their staff, ban mobile phone use and measure risk well are the ones which reduce cost and improve efficiency.

“But managing a driving for work policy can only be effectively handled if it is integrated into your arrangements for managing health and safety at work.”

The main areas this needs to address are what your policy consists of, who takes responsibility and how this process is organised and subsequently monitored.

It consistently advises motorists to avoid all distractions that take their eyes away from the road – whether it’s on satellite navigation systems, music systems or mobile phones.

The AA’s Watters says: “It’s imperative that policies are in place to ensure that driving doesn’t take place when the motorist is tired as this makes them more susceptible to distraction and significantly reduces their reaction time, which in turn increases the risk of having a collision.

“I also think that fleet managers need to be mindful of those young male drivers in their ranks - it’s been proven that these motorists are more likely to have a crash.

“These days, information gathered through telematics can prove very effective in reducing the likelihood of crashing.

“Frequent hard braking – as well as speeding – can often be good indicators that vehicles are not being driven appropriately.”

Once a business is in possession of this information, a decision can be taken about the most appropriate way to remedy it.

Road safety charity Brake encourages all business drivers to sign up to its six steps to help prevent crashes.

Laura Woods, a research officer for Brake, says: “Road crashes are not accidents – they are preventable tragedies.

“I’d encourage all drivers to sign the ‘Brake Pledge’ which consists of six simple promises to drive safely.

“It’s a simple tool to help drivers understand and reduce their risk on roads and we believe that it has the potential to make an enormous difference.” 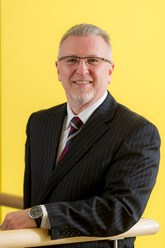