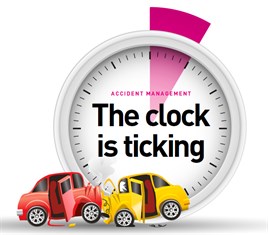 Kelly Fleet Services has had only one third party claim in the past four-and-half months thanks to its in-house accident management team.

Getting drivers to contact the team at the scene is crucial, according to Clare Cain, fleet claims/risk manager at Kelly Fleet Services.

The drivers call a 24-hour accident line and give details which enable the team to establish liability. The team also records the make, model and registration of the third party’s car and the number of people in the other vehicle.

The driver will take pictures of their vehicle, the other vehicle and the location and gather any witness’s details.

If a driver is medically injured and unable to give all details to the accident line a manager is sent to the scene to assist and support.

The team will even speak to the third party at the scene.

If the third party declines to speak to them, Kelly Fleet Services’ driver gives them a card with the team’s contact details.

The team also sends the third party an “intervention” text message, offering to repair the vehicle at one of Kelly Fleet Services’ approved repairers in their area and to provide a like for like hire car at no cost.

“We deal with the third party in a sympathetic and personal way,” Cain says. “When we used a company to help with the accident line we had a third party saying that they found them aggressive and they felt intimidated. By managing the process in-house we can ensure that every claim is managed in the same fashion and on a one to basis ensuring all needs are met and the third party is happy with our service.”

When Cain used an external company she found that it didn’t give the same attention to detail as the in-house team.

“They didn’t always get the third party registration or the correct telephone number and just didn’t give that personal touch that is so required at a distressing time,” Cain says.

“I would phone the company to see what was happening with a claim and they would have to come back to me later. But I wanted the information straight away.”

Fraud is also an issue as the vehicles are branded and people know the vehicle is insured.

“By managing it in-house we can pick up on fraud claims quickly,” Cain says.

On average, Kelly Fleet Services has four or five fraudulent claims a year.

“We had a case where we hit a vehicle in the rear and the third party declined to use our services,” Cain says. “He wanted to use his garage, which charged £47 an hour. The insurance company might have let that go but we rang them and said that we couldn’t sustain those rates. It turned out the driver had front end damage from an accident the week before, as well as our rear end damage. He was trying to get the whole car repaired at our cost. Fraud does happen.”