Supplier management: 'not all about the price' 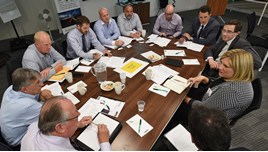 Companies must “think beyond price” when choosing their fleet supplier. Instead, they should appreciate value for money and long-term relationships.

That was the advice from experienced fleet managers and industry suppliers at the Fleet Industry Advisory Group’s (FIAG) workshop on ‘the role of the supplier in supporting the fleet manager’, which was sponsored by Enterprise Rent-A-Car and held at the company’s training centre in Egham, Surrey.

FIAG founder and chairman Geoffrey Bray warned delegates that “you get what you pay for”.

“There is no single magic formula to securing the right suppliers, but relationships are key, as is trust,” he said.

The workshop was based on roundtable discussions, with delegates looking at the role of suppliers in three areas: choosing suppliers, managing suppliers and renewing or changing suppliers.

Here, we cover the key points from each.

Fleet managers must work with a number of internal stakeholders in order to choose the right supplier. Peter Weston, formerly in charge of the Home Retail Group fleet and founding member of FIAG, emphasised the importance of the purchasing department.

“You need to work in partnership with your procurement team to make sure you get everything you want,” he said.

The make up of the fleet will also determine which stakeholders play the biggest role. Context will influence decision-making, according to Bray.

“If it is perk vehicles, you will need HR involved,” he said. “If it is a job-need fleet, it may be different.”

Once the right people are involved in the tender, be clear about what you want to achieve. Tenders that are too general are a waste of time for the both the fleet manager and the supplier.

“Many businesses frequently do not know what they want and there is often a conflict between saving money and not wanting to upset employees with changes,” said Weston.

“The cheapest supplier is almost certainly the one an organisation does not want.”

He added: “If businesses are not clear during the tender process then suppliers will also be unclear on what is required and may build in potential costs.

“As a result, those suppliers may be discounted at the first hurdle of the decision-making process because they were too expensive when, in reality, they could have provided a good service.” He suggested that “scoring systems are good”, but companies “need to find the right weighting”.

To some extent, the criteria will be influenced by the type of company, according to Ian Housley, health, safety, environment and quality director at The Clancy Group and FIAG founding member. “It depends how they use the fleet – whether they make money out of the fleet,” he said.

“For example, many major organisations have an in-house division which is responsible for the purchasing of all vehicle assets. It then hires them out at a commercial rate based on wholelife costs across an organisation’s operations thus functioning  as a profit centre in its own right.”

The importance of finding an ethical supplier with good business practices and a sound reputation was also highlighted at the event. For some, the person representing the company during the tender plays a key role. “If you like the person, you will do business with them,” Housley suggested. As one delegate pointed out, “people buy from people”.

However, fleet managers need to bear in mind that their key account manager at a supplier could change during the course of the contract, so it is important to look at the culture of the business as a whole, not just individuals.

“Business cultures are critical when selecting suppliers and expecting it to be the start of a long-term business partnership,” said Housley. “Fleets and their suppliers must have a cultural fit and be able to have open and honest discussions. Communication between the two parties is critical.”

Fleet managers should also look to the future during their discussions with shortlisted suppliers: find out what is happening in the market place and what new products they might be introducing.

Service level agreements and key performance indicators are an important part of managing the relationship with the supplier.

“Measurements should be established at the outset of the selection process and not half-way through,” Housley said. “But service level agreements and KPIs need to be specific to the supplier-fleet relationship.”

The amount of ‘noise’ from drivers is a good indication of how well the relationship is going, along with how quickly complaints are resolved. Delegates suggested that having a fleet manager – or at least someone with fleet knowledge and expertise – within the organisation is important to keep the supplier in check.

Companies should make sure they understand any fees being charged by the supplier. However, doubts were raised about whether fleet managers ever get “true transparency” from their suppliers over cost.

“Leasing companies don’t always want to show all the rebates and margins they make,” one delegate suggested.

However, there was an understanding that suppliers “are in business to make a profit” and, as long as the supplier was providing what the fleet manager wanted at the price it needed to be at, then that was acceptable – though the issue of transparency remained a concern.

Renewing or changing the supplier

It is good practice to re-evaluate every supplier regularly, according to Weston. “It helps to make sure you’ve got the right price and the right relationship,” he said.

He also pointed out that “a tender you put together a few years ago might not match your requirements now”.

When re-evaluating your suppliers, start with how they are performing against the KPIs set and do a cost comparison – but don’t forget your drivers.

Eric Bristow, business analyst – service division at Hobart, saw them as crucial. “It’s important to take drivers’ opinions into account,” he said. “Listen to them and accept their comments if a company is not performing.

“The suppliers we use survey drivers and publish the results monthly. That would form part of our analysis if we needed to change.”

A decision to change will need to be justified to the board, so fleet managers need to be clear that the change was made for the right reason.

One delegate warned that changing suppliers could mean you were “out of the frying pan and into the fire”. Fleet managers also have to bear in mind the cost to change and should agree an exit strategy early on.

Sometimes the cost of changing can outweigh the saving. For example, if you are switching to a new van manufacturer you may have to redesign your racking.

Delegates advised trying to rectify the situation with a supplier, rather than changing, and only change if issues cannot be rectified.

Housley added: “When entering a new relationship, it is important to look long term – 10-15 years – and to allow time for that relationship to develop into a true partnership. Fleet-supplier partnerships are all about learning from when something goes wrong and understanding that both parties must work together for the collective good.”

The Fleet Industry Advisory Group (FIAG) is a not-for-profit organisation which launched last year with the aim of developing and sharing best practice in the fleet industry.

It was set up by industry veteran Geoffrey Bray and a team of experienced fleet managers who collectively have around 200 years’ experience in running vehicle operations.

Through the knowledge of its founding members, FIAG provides fleet advice, consultancy, mentoring and support.

It also assists with benchmarking and analysis of industry developments through the publication of white papers and the organisation of workshops.

FIAG is also dedicated to supporting Hope for Tomorrow, a national charity which raises funds to support the introduction of mobile chemotherapy units nationwide.