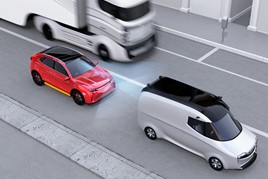 Vehicle safety technology has come on an astonishing amount since a Volvo engineer invented the three-point seatbelt 60 years ago.

Technologies such as airbags and anti-lock braking systems (ABS) revolutionised vehicle safety when they were launched in the 1980s, and now once futuristic-sounding technologies such as autonomous emergency braking (AEB) can be found in the majority of new cars, regardless of manufacturer or model size.

However, the safety technology journey is far from over. Vipul Dave, UK and global sales manager at Thatcham Research told delegates at Fleet Live: “Over the next five years we think there will be more technology and change in the automotive industry than there has been over the past 50. There is a huge, huge acceleration of technology.”

Fully autonomous vehicles are still “some way in the future”, says Dave, with a lot of work needing to be done before this can happen, including changes to infrastructure and connectivity to include vehicle-to-vehicle.

Until then, however, existing and future advanced driver assistance systems (ADAS) technologies will continue to have a major impact, with Thatcham expecting all fleet vehicles to be fitted with AEB within the next three-to-four years.

Earlier this year, the European Parliament approved new minimum EU vehicle safety requirements that will see all new cars, vans, lorries and buses sold in Europe fitted, as standard, with a range of safety features such as AEB and over-rideable intelligent speed assistance from 2022.

“We have a clear understanding that automated features on vehicles will drive down the number of accidents on UK roads, saving lives, reducing repair costs and creating a better mobility space for the future,” says Dave.

His view is shared by Gill Milner, technical account manager at insurance company Aviva, which has seen a reduction in ‘hit third party in rear’ collisions as the number of vehicles fitted with AEB has increased.

Aviva does not have any published figures to support this, although research by safety organisations Euro NCAP and Australasian NCAP found that AEB led to a 38% reduction in real-world rear-end crashes.

“We see ADAS as an opportunity for us to prevent and reduce the collisions and the costs that go alongside these,” says Milner.

“When we look at the types and frequency of collisions that are happening in today’s vehicles, most will be hit third-party in the rear, slow manoeuvring and – starting to creep up – changing lanes incidents.

“When we look at our data of hit third-party in the rear, we are starting to see a reduction in this type of incident which is a direct correlation of AEB starting to impact on the claims.”

She adds: “We are seeing an increase in collisions during slow manoeuvring and, when you look at ADAS, it is nice to see reversing AEB becoming available which is probably going to help over time.”

Dave says that while the new technologies will ultimately reduce collisions, their impact may not be immediate.

“The challenge with any new technology when it comes in – and you can go back to ABS for proof of this – is that having this mixed technology doesn’t necessarily have a significant impact in the reduction of incidents straight away,” he says.

“However, when you get to a crucial golden point when maybe 60% or 70% of the cars on the road start to have it, then at that point you will start to see a downwards migration of accident risk.”

As well as reducing incidents, fitting safety technology can also cut a fleet’s insurance premiums, says Milner, so it is important organisations let their insurers know what equipment is being fitted.

“I can’t say what percentage (the reduction would be) but if we are seeing an improvement in claims, then the premium will fall as well,” she adds.

Fleets can also retrofit safety technology to reduce risk, such as telematics and in-cab cameras, which can also positively impact premiums.

“We have seen a lot of ADAS come in, but we still know there is one part of the vehicle – the driver – that can still cause some crashes to happen, so we are also looking at how fleets are managing the distractions of their drivers,” says Milner.

“We have run some pilots recently with a few fleets with internal, driver-facing cameras and these give you more data about what the drivers are actually doing within that vehicle.

“What is the behaviour of the drivers when they are in that vehicle? Are they paying attention? Is what they are doing impacting on their judgement?

“Cameras can also help you identify fatigue, whether drivers are using mobile phones, and if they’ve got both hands on the steering wheel.

“Are they looking away from actually driving? If they are travelling at 40mph and they are looking down at their mobile phone to read a text message, in those five seconds they will have travelled the length of a football pitch blind.

“What was most interesting is that in the fleets that had telematics as well, those drivers who drove perfectly well according to the telematics data were actually among the most distracted. “They weren’t coming up on any fleet radar as being reckless, their telematics performance was in the upper percentile, but as soon as we looked at distractions, we found they were looking at mobile phones and everything.

“We actually had one person who quite enjoyed dancing and singing behind the wheel, but by him dancing to his music, we could see he was distracted and not looking at the road for more than six seconds at a time, which is something he didn’t recognise.”

While technology can have a major role in improving road safety, organisations should not become complacent and begin to overlook the part drivers have to play in a safe fleet, says Milner.

“Organisations have got to look at both elements: the technology and also how they are managing their drivers and fleet,” she adds.

“They should look at the well-being of their drivers – physical, mental and financial – because if an employee has got a lot of things going on in their head, their focus on driving may not be in the right place. ADAS will help counteract some of this.

“Organisations should keep up to date with technological developments and look at the best available technology which is not entailing excessive cost to them as a business.

“AEB is an absolute must for us, and some of these in-cab distraction cameras that are coming into the marketplace can have a massive impact as well.”

Advanced driver assistance systems (ADAS) are intelligent systems that assist the driver in a variety of ways, including: