1. Analyse and understand the root cause 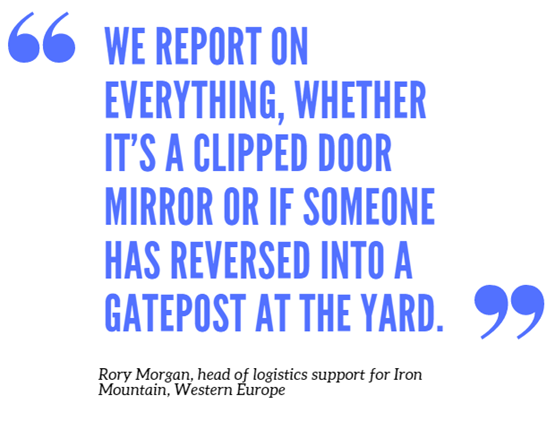 Identifying issues so they can be addressed is a fundamental part of Iron Mountain’s road risk management programme.

It does this in a variety of ways, including through a robust incident reporting system, collecting data from telematics technology and carrying out on-road driving assessments.

“We’ve got our own incident reporting system which is bespoke to Iron Mountain where everything is reported: it could be a missed delivery or a leak in a warehouse, but vehicle incidents are in there as well,” says Rory Morgan.

“We report on everything, whether it’s a clipped door mirror or if someone has reversed into a gatepost at the yard.

“We can collate all that data and say, categorically, where our poorest performing areas are and home in on these.”

Every month, Morgan holds a conference call with Iron Mountain’s driver trainers where they investigate each incident.

READ MORE: Iron Mountain: ‘We’ve never sacked anyone because of their driving’

“We also deem whether we feel they are ‘at-fault’ regardless of what the insurance company says,” he adds.

“Even if it is one of those that is viewed as 50/50 by our insurers we will put it down as at-fault because our employee should have been driving defensively: they may not necessarily have been fully at fault, but they contributed as they could have avoided it.”

“This gives the trainer a good profile of that driver,” says Morgan.

2. Do something about it without delay 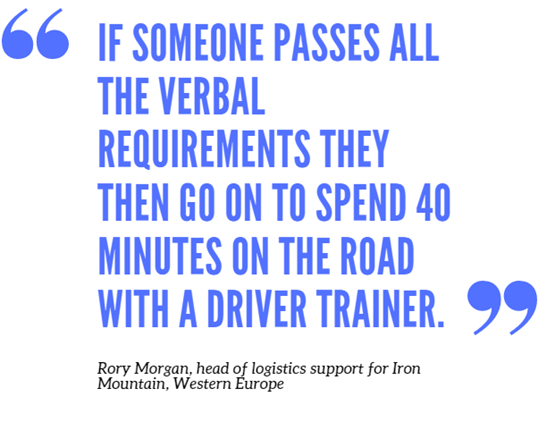 “That may be in reaction to telematics scores, or it could be post-incident which could be a collision or something like a manager picking up that a driver is not so good with tachographs.”

One of Iron Mountain’s biggest wins came after it identified low-speed driving and manoeuvring as an area where improvement was needed.

“We focused on that,” says Morgan.

READ MORE: Fleet and safety: How to react to danger without any risk

“We had a purge. All the driver trainers went out and every driver had a 90-minute session in the yard with bollards and pallets, where they had to get out and look, and were taught how to use their mirrors etc.”

The supplier’s scoring method is to achieve less than 20 ‘events’ per 10 hours of driving, which it regards as safer driving.

“We thought that was too easy from the outset so we targeted below 10 right from the start,” says Morgan.

“In the past two years we’ve reduced that to below five, so a driver that does more than 500 driving hours throughout the course of a year and scores an average of five or below they are deemed to be an elite driver.”

Morgan says the average number of events has declined by around 95% to 145 a week on 318 vehicles, which is equivalent to one event per vehicle per fortnight.

“If someone passes all the verbal requirements they then go on to spend 40 minutes on the road with a driver trainer,” says Morgan.

The driver is scored through a formal assessment sheet.

If an applicant is borderline and the driver trainer thinks that with a little bit of coaching they will be ok they will still be considered.

But, if they are way off and the trainer doesn’t think they can improve to the required standard “then it’s a blanket sorry – that cuts it off at the pass”, Morgan says.

3. Maintain and manage – don’t walk away 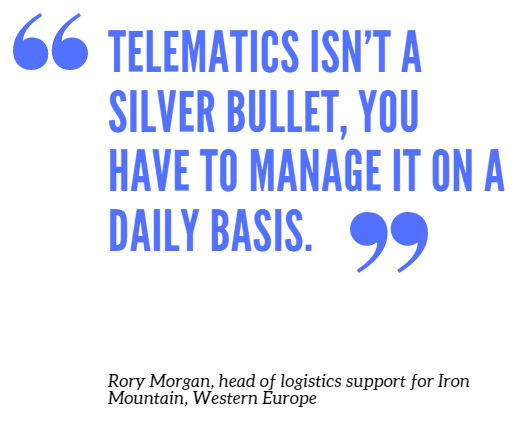 “You cannot take your eye off the ball,” says Rory Morgan.

“In 2015 we experienced our first year in six since we started that we actually had an increase: incidents had gone up 18% on the previous year.

“We are only talking 10s of incidents, not thousands, and there were mitigating circumstances: we were selling off an arm of our business so there was a bit of apathy and that sort of thing creeping in, so, at the end of that year, we refocused.

“I got my team and the driver trainers together and we talked about where we needed to focus because it was the first time our figures hadn’t fallen.

“I said that the best year we’d had was 2014, so with those 2015 results we were comparing our-selves against our best, anyway. We agreed for 2016 we would aim to beat 2014 and we hammered it, we absolutely annihilated it.

Each driver has an annual assessment which links into part of their annual bonus.

Iron Mountain also carries out driving licence checks for both company vehicle drivers and grey fleet drivers every six months. If a driver has nine points on their licence, the licence checks become monthly.

However, Morgan (pictured below) adds: “Telematics isn’t a silver bullet, you have to manage it on a daily basis. If you let it go, then you are just throwing your money down the drain.” 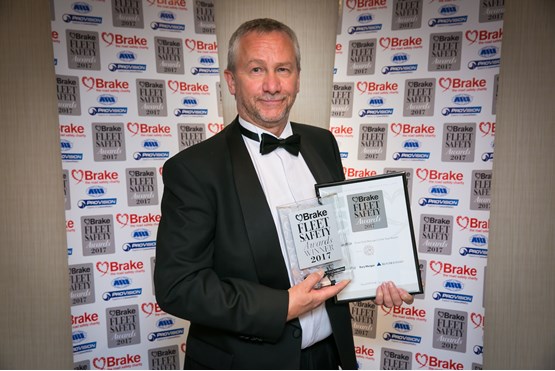 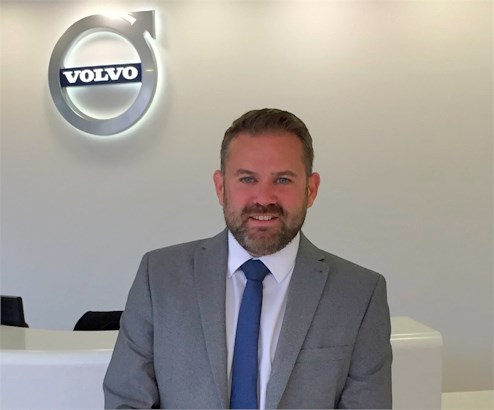 Volvo Cars is leading the way with a focus on safety – with the aim that no one will be seriously injured or killed in a new Volvo by 2020.

As fleets focus on their duty of care to their employees, while also on running an efficient vehicle fleet operation, Volvo remains committed to providing class-leading safety technology while reducing motoring costs.

■ City Safety – identifies other vehicles, pedestrians, cyclists and large animals ahead and automatically brakes the car.
■ Driver Alert Control – this clever feature recognises if a driver is tired or distracted.
■ BLIS – alerts drivers when vehicles are approaching from behind.
■ Cross Traffic Alert – uses cameras to help drivers reverse out of parking spaces.
■ Active High Beam Technology – automatically dips headlights from full beam.
■ Oncoming Lane Mitigation – warns drivers if they move out of their lane into the path of an oncoming vehicle.
■ Pilot Assist – Volvo’s advanced semiautonomousdriver assistance system, whichtakes care of the steering, acceleration andbraking on well-marked roads up to 80mph. In addition, its Park Assist Pilot will parallel park drivers’ cars for them.

Many of these features are now also appearing on the company’s smaller segment cars,including the XC40 and XC60 SUVs. Volvo models are helping fleets increase risk management compliance.

This is important as Health and Safety Executive data suggests more than a quarter of all accidents involve someone who drives as part of their work.

Iron Mountain: ‘We’ve never sacked anyone because of their driving’