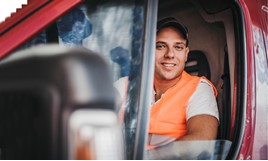 Increasingly sophisticated technology is making cars safer than ever, with systems such as autonomous emergency braking significantly reducing the risk of collisions.

However, latest figures from the Department for Transport show that last year there were still 25,511 people seriously injured in reported road traffic collisions, an increase of 3% from 2017.

Multiple studies have also found 90% of crashes are due to driver error. For any organisation, this means the journey to a safer fleet still begins with employee recruitment, says Andy Price, director of Fleet Safety Management.

This applies equally whether that person is employed primarily as a driver, or if driving is a means to an end, such as for a salesperson or service engineer.

“Unless you are employing someone specifically as a driver then (safe driving behaviour) is never going to be a major part of the recruitment process, but there is nothing stopping an employer – and some do – from bringing up the safe driving element in the interview process,” says Price.

“Clearly the whole recruitment process should be around the competence of that person to do the job the company is asking them to do, but you can still get a feeling for what someone’s attitude to road safety is and whether they are fit to drive.

“As an example, when I was working in the chemical industry, our sales manager was recruiting a new salesperson and this bloke turns up. He was a bit flustered and said that to get there on time he had to go into a coned-off area of the M25. Because the sales manager knew the organisation took road safety seriously, he cut the interview short there and said ‘thanks for coming, but you’re not the right fit’.

“That is example of an organisation that was doing it well.”

Altrad Services asks job applicants whose role will involve driving a car or van on company business to supply their driving licence to enable it to check candidates’ driving history and how many penalty points they have.

“We find that 99% of the time new staff are employed to do a role, not to drive, so they will be employed for their skillset in their primary function,” says Matt Hammond, head of fleet, plant and equipment at Altrad.

“Sometimes it’s hard to get it through to people that even though driving is not their role, a big proportion of their time will be spent behind the wheel, so we will work with them to make sure they are the safest and best driver they can be.

“We always look at their driving licence as that’s the best starting point, and then do a risk assessment during their probationary period.”

He adds: “On the HGV side of things, we will make candidates do a driver assessment before any official offer is made, so we will go through our normal interview process, narrow our choice down to one or two candidates, then take them out on a driving assessment to make sure we are happy and confident.

“A lot of the time it comes down to ‘feel’ with a driver. You feel one guy is a bit more competent or more fitted to the profile we want.”

As well as driver licence and driving history checks, road safety charity RoSPA (Royal Society for the Prevention of Accidents) says employers could carry out a theory or Highway Code test to assess a candidate’s knowledge about the rules of the road and safe driving, as well as an on-road practical assessment in the type of vehicle they will be driving.

Candidates can also be asked to complete a medical declaration to confirm they are fit to drive.

“If the job requires a substantial amount of driving, consider requiring them to take a fitness to drive check, including an eyesight test with a medical professional,” adds a RoSPA spokesman.

Once the successful applicant has been offered the job, Price says a fuller risk assessment process can start so on their first day of employment, the HR team or the manager who will be responsible for that person will know the risks that person faces.

“They can actually say ‘we’ve done that risk assessment, now you’re with us, we’ve identified this and this’,” adds Price.

“Training on day one is probably a bit over the top, but it would be appropriate in the first week or two.”

He says new recruits can also be given a copy of the employer’s safe driving policy ahead of their first day so they understand what will be required of them.

While the recruitment process provides the first opportunity for an employer to make sure the right approach to road safety, the staff induction process and probation period is also key, says Nigel Lawrence, head of client partnerships at Applied Driving Techniques (ADT).

“The best time to capture the imagination of an employee is the induction stage, because, when somebody starts at an organisation, they are keen to impress, they want to buy into the culture and the values, so making that induction process as robust as you can is key,” he adds.

Altrad Services carries out a driver assessment as part of its three-month probationary period “so we know this person going out in one of our assets or sign-written vehicles is the type we want representing our business on the road”, says Hammond.

“If it comes back that they are not, or that there is an issue, then we will speak to their line manager to understand the bigger picture for that employee: how they are doing in other areas, is this something we need to work on, or is this another piece to say this isn’t the right person for the business?

“We don’t want to lose anybody or let anyone go, so we will work with every driver to make sure they are as safe as can be and be the best driver they can be. But, if other elements are also letting them down, we will make an assessment if they are going to stay with the business or not.”

RoSPA recommends employers include awareness and understanding of the company’s driving for work policies and procedures in the induction period.

They should also provide vehicle and route familiarisation to the new recruit, especially if they will be driving a type of vehicle they do not normally drive, such as a van, or on types of roads or areas with which they are not familiar.

It says that organisations could also offer a ‘buddy’ system, in which the new employee is paired with an experienced staff member to act as their mentor for a period.

“This is especially useful for young staff and for staff who are driving a new type of vehicle, for example a van, for the first time,” says RoSPA.

“It is important to ensure the buddy does not pass on incorrect information or bad habits, so consider some training and monitoring for buddies.”