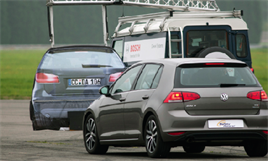 Over the past 20 years, automotive safety technology has become an ever more important issue for fleets – and the industry in general.

Since it was established in 1997, the Euro NCAP safety and crash testing programme has helped improve safety standards.

Its rating programme is independent of car manufacturers and is performed in research and test centres spread across the continent.

Technology has advanced from passive safety systems such as airbags, headrests and seatbelt pretensioners, to active systems such as anti-lock braking (ABS), electronic stability control (ESC) and autonomous emergency braking (AEB) which help prevent an accident from occurring.

Thatcham Research is one of Euro NCAP’s testing partners and, in recent years, the UK organisation has specialised in investigating collision avoidance technology.

Bosch, together with Thatcham, has been running the eSafety Aware programme to educate the wider automotive industry on the technology behind autonomous safety and how it can make a difference, either eliminating or reducing the impact of collisions.

The eSafety Aware programme offers training sessions at research institute MIRA, where those in the automotive and fleet industries can witness the difference some of these technologies can make on the road.

Fleet News was invited to take part in the programme and getting behind the wheel of a vehicle to experience the crash prevention technology made it clear how beneficial it could be.

All the vehicles we performed the demonstrations in were standard vehicles, on sale today, with many of the systems on test gradually moving off the options list and becoming standard specification.

Developed by Bosch in the early-1990s as electronic stability programme, ESC is mandatory across the EU on every new car and light commercial vehicle.

The basis of ESC – technology to control braking to each wheel with millisecond precision – forms the bedrock of today’s safety technology. It’s a combination of ABS and traction control, for acceleration without slipping.

Speed sensors on each wheel, a steering wheel angle sensor and direct links to the vehicle’s computer system allow information to be fed to the brakes to react to a changing situation.
It’s an invisible system – drivers don’t need any training, nor drive differently – but the ESC system, indicated on the dash by a orange skidding car icon when activated, will act as a correction tool when necessary.

The standard fitment ruling should mean that within the next couple of years, almost all cars on fleets will have ESC, depending on replacement cycles.

There are also various added benefits that ESC can bring, particularly in the LCV sector.

Load adaptive control is a variation of ESC that makes adjustments to the vehicle’s steering characteristics based on the positioning of the load and the centre of gravity of
the vehicle.

Roll over mitigation, another adaptation of ESC, detects lateral movement from winds, alerts the driver, and makes adjustments accordingly. A variation of this system is also used for detecting winds and reducing trailer sway, which is particularly useful for vans towing plant, or drivers with caravans.

Hill hold control, which keeps a vehicle in place as it accelerates away from a hill start, is also a derivative of ESC.

It uses a combination of radar and cameras to detect the car in front, and will ‘lock’ on to it. The driver sets their maximum permitted speed and the car follows at a pre-determined distance. Like standard cruise control, the driver can cancel it at any time, but in a flow of traffic the system makes a journey far less stressful.

Standard on a number of vehicles including SE and Match trim levels on Volkswagen’s Golf and an option on many other vehicles, it could make a difference to the well-being of high-mileage drivers.

While generally used in faster-moving traffic, several cars on the market, including the new Volkswagen Passat and Mercedes-Benz models, offer a slower speed function that allows the vehicle to control its speed while in slow-moving traffic queues.

Our technology demonstration took place in a manual Volvo S60, accelerating to a constant 18mph before letting the car prevent a collision with a simulated parked vehicle by coming to a complete standstill.

These units (pictured left) are used by Thatcham in Euro NCAP testing and are designed to resemble the radar profile of a car as closely as possible.

AEB is designed to be a last resort. If the car senses human intervention, such as sudden steering movement or another reactionary movement, it lets  the driver take control of the vehicle.

The sensation of letting the car bring you to a halt is quite shocking, but powerful. In the manual S60, the braking system also stalls the vehicle, which exacerbates the effect, but you can be moving away again in seconds with just a turn of the ignition.

AEB has the potential to eliminate a huge number of low-speed collisions.

The system uses a short-range detection system, LIDAR, to scan the road up to 20m ahead for vehicles and will prepare the brakes to be applied if needed.

With fitment of this system costing from £250 where optional, the demonstration proves if you only opt for one additional safety expenditure, AEB is a wise choice.

Our higher-speed emergency braking demonstration took place on the long straight on MIRA’s infield, and was a particularly striking experience. Designed to reduce the impact, or even eliminate, higher-speed rear-end collisions, the system works at speeds above 20mph.

Bosch has developed a test unit for this demonstration involving a Land Rover with a simulated car suspended from its rear. With the ‘traffic’ in front travelling at 25mph, our Golf fitted with the technology approached at 50mph.

Radar long-distance technology monitors the road ahead, with LIDAR short range detection monitoring the situation as the vehicle gets closer.

The system kicks in only if no intervention is detected from the driver. An audible and graphical warning is given seconds before the predicted impact, which should give the driver time to react and avoid the situation.

If they don’t, brakes will be applied to either avoid the crash or reduce the severity of the impact. The technology isn’t going to prevent every collision, but with the car assisting in the braking process, the impact can be lessened.

Coming to a complete stop just feet away from the ‘car’ in front from travelling at 50mph is quite disorientating, but extremely impressive. Again, within seconds, the driver can be on their way – accident avoided.

In its most basic form of parking sensors, park assist has been on vehicles for many years now.

However, the increase in fitment of sensors and sensor technology has improved the capability of this equipment greatly over the past few years. A growing number of vehicles offer a self-parking facility which requires minimal input from the driver. This input is generally twofold – changing gear and controlling speed via the accelerator pedal.