The heavy snowfall was a critical factor in December, proving challenging for both buyers and sellers alike.

While higher levels of business than normal were transacted over web-based remarketing channels, many de-fleet collections had to be deferred as a result of the snow and stock fell sharply as a result.

Even when vehicles were in situ and able to be sold, BCA reports that there were often logistical issues in getting vehicles delivered to the buyers.

It reports that average fleet values increased by £120 (1.7%) to £7,235 – reversing two consecutive monthly falls that had seen values decline by around £600 in an eight-week period.

BCA’s communications director Tony Gannon said: “In past years, the snow and attendant travel chaos would have caused even more serious disruption to the remarketing sector, simply because the industry remained largely reliant on trade buyers being physically in the same location as the vehicles they were buying.

“Nowadays, the effect is heavily mitigated by the availability of internet bidding and BCA saw online buyer volumes rise sharply from a typical 18% of sold vehicles to average over 23% nationwide.

“However, the markets are not immune to the severe weather and there is little doubt that retail businesses were affected in the short term and that impacted on the wholesale markets in turn.”

He added: “January generally brings a further uplift in activity, and this is typically sustained until the Easter period – which usually represents a watershed in demand.

The months immediately ahead are unlikely to see any significant increase in available volumes, which means average values should remain relatively stable in the short term.”

The fleet sector experienced the biggest decrease in 2010 as average values fell by 7.2% (£443), according to Manheim.

Mike Pilkington, managing director at Manheim Remarketing, said: “After a dramatic rebound in values during 2009, it was perhaps inevitable that with the continued economic uncertainty there would be a fall in values in 2010 and a return to more traditional patterns of price seasonality.

“The poor weather provided an additional challenge in December, but the availability of our online buying channels helped keep the market moving with record sales for us online in the month.”

It was also difficult month for Wilsons Auctions, but all of its fleet sales went ahead despite the weather.

However, like BCA and Manheim its online activity surged with a 30% increase in its Live Bid platform. 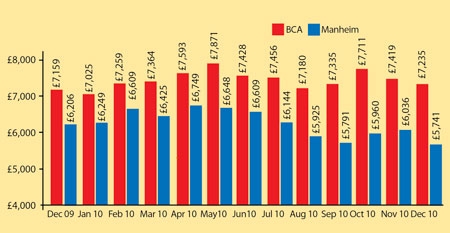