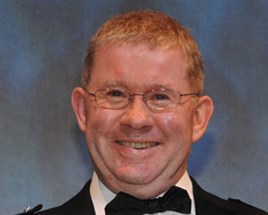 What is your biggest achievement in your current role?
Building a team of 65 staff that are all focused on excellent customer service and have been rewarded with winning the Fleeteye, Fleet News and FN50 Customer Service awards in 2012.

Who has had the biggest influence on your career?
A mixture of people from my personal and business life, but no single person comes to mind.

What is your dream holiday?
Going away for a few weeks on a wine tasting and golfing holiday. Play the best golf courses, drink the best wine and eat fantastic food.

Who was the last person you received a text message from?
My brother Andy.

What is your favourite sitcom?
Blackadder because of the great characters and brilliant script.

What is your favourite film and why?
Life of Brian. It’s got the funniest line ever: “I’m Brian and so’s my wife.”

You are going to a desert island – what three things do you take with you?
Golf clubs, iPad for music and books with solar charger and my wine collection (hopefully that counts as one item).

When did you last use public transport?
I got the tube to Heathrow Airport last week.

What is the first thing you would do if you were made Prime Minister for the day?
Make the banks lend more money, particularly to first-time house buyers.

What was your biggest mistake in business – and what did you learn from it?
I have made plenty of mistakes but none really stick out. They are generally caused by not thinking decisions through properly. I have learned to assess the impact of individual decisions and now spend more time on the important ones.

If you won the Lottery, what would be the first thing you would buy and why?
An Aston Martin Vanquish because I could then afford the speeding fines.

What is your best childhood memory?
My first trip to Murrayfield to watch Scotland v Wales play rugby.

What is your favourite book?
Catch-22 – it sums up the futility of war.

Which historical character do you most identify with?
The inventor of the television, John Logie Baird. He was my grandfather’s cousin.

Gareth Edwards. I saw him play at Murrayfield and thought he was the complete rugby player.

What is your guilty pleasure?
Red wine.

Describe your leadership style?
Reasonably hands-on, happy to delegate, fair and I try to give people the benefit of the doubt.

If you could work in another profession what would it be?
Sports management.

When did you last feel guilty about the environment?
When I jumped in my car to get a pint of milk and could easily have walked.

What advice would you give your 18-year-old self?
Spend more time studying in the library than at the pub. Learn to play a musical instrument.

What one object couldn’t you live without?
I would like to say my golf clubs, but it is probably my iPhone.

What’s the best gift you’ve ever been given?
A rugby ball.

What is your dream car?
Aston Martin Vanquish.

What has been the pivotal moment in your life?
In 1986 I finished a post graduate diploma in offshore engineering at Robert Gordons in Aberdeen. The oil price was around $10 a barrel so there were large numbers of lay-offs and very few jobs in the industry for graduates. I had a choice to stay in Aberdeen and potentially spend months looking for a job or move back to Edinburgh. I moved to back to Edinburgh and within a couple of months had a job with Cochrane Leasing, a contract hire company. Who knows what would have happened if I had stayed in Aberdeen.