Was this article useful?
Click the thumbs up >
VAUXHALL has unveiled it eagerly-awaited three-door Astra ready for the car’s international debut in Paris next month.

The car retains the stunning looks of the GTC concept car that grabbed world attention when it was revealed at the Geneva Motor Show in 2003.

On sale in 2005, the it will be available with a choice of four petrol and three common-rail diesel engines with power outputs from 90 to 170 bhp.

All engines comply with the Euro 4 emissions standard.

A VXR model with a power output in excess of 230 bhp, more extreme styling and sharper handling will be revealed later this year and go on sale in summer 2005.

In some models, the driver can activate a sport set-up using the SportSwitch button which regulates damper adjustment as well as accelerator-pedal and power steering response. If specified with automatic transmission, gearshift points are also modified for a sportier driving style.

Astra three-door can also be specified with steering-linked AFL headlamps (Adaptive Forward Lighting), which turn with the steering wheel.

Outside, short overhangs combine with distinctive rear lights and a more pronounced tapering at the front and rear.

In addition, the arched sloping roof and the angular rear side windows with wide shoulders aim to highlight the powerful shape of the body, which sits around 15mm lower than the five-door.

There is also an optional panoramic windscreen – making its own world premiere in the three-door model – which extends to the B-pillar.

Friedhelm Engler, Astra chief designer and director, design integration, GM Europe, said: ‘It has a sleek design and represents the most dynamic expression of the new Astra range. That is of course not achieved by simply reducing the number of doors on an existing model.’

The Astra three-door is manufactured in Antwerp, Belgium, where the five-door model and the estate are also produced.

Planned annual capacity for the three-door model is around 70,000 units. The Astra three-door goes on sale in spring 2005 with prices to be announced nearer the on sale date. 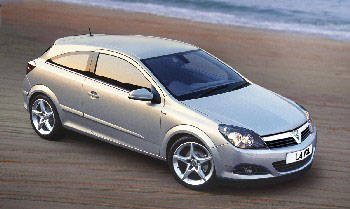