Special report: Nissan chiefs look to Infiniti and beyond...

Was this article useful?
Click the thumbs up >
MERCEDES-Benz is arguably the ultimate luxury brand in the automotive industry, its position carefully nurtured over more than 100 years.

How difficult must it be to break into the luxury car sector with a completely new brand? Lexus has certainly found the past 15 years challenging since it was introduced in North America. In the UK, it has a sales network separate from its parent, Toyota, which is regarded as the finest in the industry when it comes to customer service.

However, although its products match the best of Europe for quality and come close on dynamics, there is still the problem of image.

Nissan is about to introduce its upmarket Infiniti brand to the global market after many successful years in North America, beginning with Korea, Japan, China, Russia and eventually Europe.

And by the time it arrives in Europe, which could be within five years, it knows it must have a state-of-the-art six-cylinder diesel engine to capitalise on the growing preference for oil burners in large cars and good six-cylinder variants for the premium sector.

Whether it will source this from another manufacturer or if Renault will have a suitable product which alliance partner Nissan will be able to use for Infiniti is a matter that needs to be resolved.

Inevitably, establishing Infiniti as a premium brand will take time, but as it will already be established in most major markets by the time it arrived in Europe it could be a little easier than when Lexus looked to Europe soon after setting up in North America.

The Nissan Murano could turn out to be a trial run for Nissan dealers hoping to set up an Infiniti sales outlet a few years later.

The Murano’s nearest rival on price and specification when it goes on sale next year will be the Lexus RX300.

Although the Nissan 350Z could appeal to Audi and BMW drivers, it is a car for driving enthusiasts who would sacrifice an element of prestige customer service because they want the car.

Nissan dealers will be trying to attract a different type of customer with the Murano, where the level of service provided is paramount.

Nissan GB managing director Bill Bosley, who has previous experience with Infiniti in North America, said: ‘We don’t want to sell customers just one car – we want to sell them other cars in the range.

‘It will be a challenge to ensure we get the level of service right, but if we do it will also be an opportunity.’ 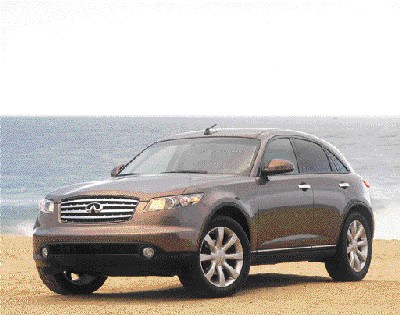 MOTORING mags in the US claim the FX is better than a BMW X5 and Porsche Cayenne and a 15-mile drive into the hills near San Francisco in the FX45 revealed this was no ordinary SUV.

The ride is stiff, especially on the 45’s standard 20-inch alloy wheels (the 35 comes with standard 18-inch wheels) but the steering is so direct and responsive, it is almost like driving a go-kart. The firm suspension also results in roll-free handling – remarkable in a car this tall.

There was more than enough grip on exceptionally twisty roads, and the car reacted quickly to steering inputs.

The 4.5-litre V8 has instantaneous torque whenever you need it and combines a luxury car whisper at low revs alongside a Nascar racer howl under hard acceleration. The FX35 uses a 280bhp 3.5-litre V6 and accelerated from 0-60mph in 7.3 seconds, a second slower than the V8.

The interior is excep-tionally roomy, slthough quality levels don’t quite match the BMW X5 – yet. Europe is likely to get the next generation of this car when the Infiniti is launched here. 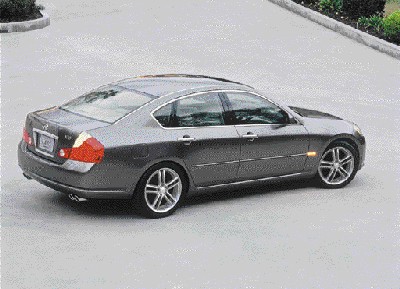 THE latest M45 is still at the concept car stage and is due to be launched in the US next year.

If the other Infinitis driven here don’t quite offer the same level of quality as the premium European manufacturers, the new M45 hits the spot with better materials and closer attention to detail.

A natural rival for the BMW 5-series and Mercedes-Benz E-class, the new M45 will feature adaptive headlamps, whose beams adjust according to the speed of the car and with the steering, and a lane-departure warning system.

The concept car is fitted with Infiniti’s 4.5 litre V8 petrol engine, but the car will go on sale in Europe with a six-cylinder diesel option, essential for user choosers in the UK. 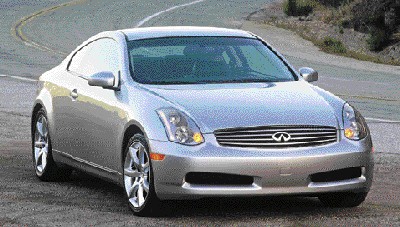 THE Infiniti G35 Sport Coupe is badged as a Nissan Skyline Coupe in Japan, so the company obviously believes it has the dynamics to help sustain 35 years of Skyline heritage.

The G35 is also available as a saloon and, in the US, is a rival for the BMW 330i. It shares the Nissan 350Z’s front-midship engine, rear wheel drive layout, which helps optimise weight distribution.

The G35 Sport Coupe is effectively an upmarket long-wheelbase 350Z and drives in a similar way. It has direct, weighty steering, a slick, short-throw manual gearchange and confidence-inspiring handling.

The Infiniti G35 Sport Coupe is a 350Z for grown ups. The future versions that are likely to arrive in Europe should also be available with a powerful and refined six-cylinder diesel.