Barrow boys roll out for charity 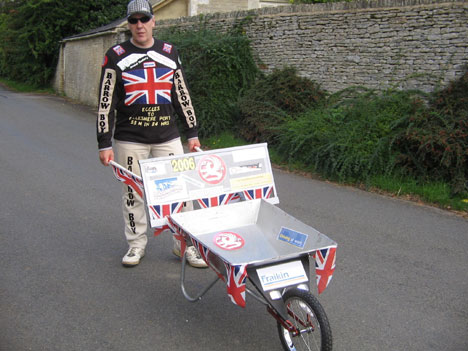 FLEET manager Barry Illing will use an environmentally-friendly vehicle for a 56-mile charity trip.

Illing, along with motor industry colleagues from Vauxhall Motors, Grimshaw Vauxhall and commercial vehicle fleet services company Fraikin, will take part in a 24-hour Wheelbarrow Push from Eccles in Manchester to Ellesmere Port in Cheshire via Prestwich.

The former Fleet News environmental award winner, who is road fleet manager at English Welsh and Scottish Railway, will start the wheel turning at 11am on October 26 to raise funds for road safety charity Brake.

Teams will complete the walk in relays apart from Illing himself, who will walk the full 56 miles.

Describing his eye-catching wheelbarrow, Illing said: ‘This is a fine example of modern engineering and environmental friendliness with its zero emissions and a fairly good payload capacity – it’s every fleet manager’s dream.’

To sponsor the teams, visit www.justgiving.com/eccles2ellesmere.