Was this article useful?
Click the thumbs up >
THE Government must commit to long-term incentives if fleets are to embrace widespread use of biofuels in their cars.

Executives at carmaker Saab, which has just launched a 9-5 BioPower car that runs on bioethanol, has called on the Government to demonstrate some ‘genuine joined-up thinking’.

It comes as Morrisons supermarket has opened the UK’s first BioEthanol E85 filling pump at a site in Norwich. It will sell the fuel for two pence per litre less than petrol.

Another four sites will open in East Anglia and five in Somerset. The company has also earmarked several other sites across the UK.

The Government wants 5% of all fuel sold in the UK to come from a renewable source from 2010.

Saab GB managing director Jonathan Nash said: ‘Biofuels can play a crucial role in reducing CO2 emissions from passenger cars and as the Government itself said when it announced plans for a Renewable Transport Fuel Obligation (RTFO) in November, a 5% use of biofuels today would be equivalent to taking one million cars off the road.

‘Although I welcome the positive steps that the British Government has taken so far in its introduction of a 5% RTFO and the 20 pence per litre tax rebate on biofuels, our experience in other markets shows that the Government needs to take a more strategic approach.’

But as with many alternative fuels, instigating wide-spread use could be problematic, experts suggest. 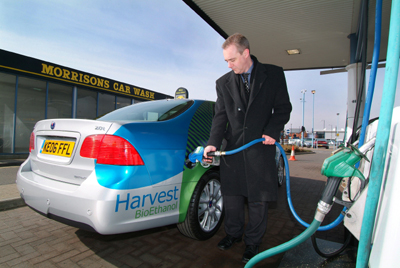 Mike Waters, head of market analysis at fleet and fuel management company Arval, said: ‘It is almost a chicken and egg situation at the moment with biofuel.

‘Manufacturers would need to produce a broad range of vehicles that can run on high concentration biofuels, while at the same time the oil companies would need to make the fuel more widely available to make a viable proposition to UK motorists.

‘There are also questions to be answered related to the cost of the fuel and vehicle performance. Are cars more or less fuel-efficient when running on biofuel?

‘With most oil companies working towards the 5% target set by Government and few financial incentives available for biofuel vehicle selection, it could be a challenge to drive demand for this technology.’

Waters said many British companies were committed to boosting their environmental credentials.

However, he added: ‘Companies must consider wholelife costs of vehicles, including residual values, to guard against future financial issues overshadowing potential environmental returns.

‘It’s worth remembering that the most important environmental consideration for any fleet still remains the effective operation of the fleet, from vehicle selection through to strict fuel cost management.’