Was this article useful?
Click the thumbs up >
IF someone offered me a brand new, fully fledged panel van for ten grand, my first thoughts would be that it might be stolen.

But such an animal is available in the UK, and it isn’t one of those half-baked things we see sometimes from Third World countries.

The van in question – and the vehicle on test here – is none other than the Citroen Relay 900, which hails from the Sevel factory in Italy.

So just how does Citroen manage to offer so much metal for so little cash?

Part of the reason is its seemingly endless series of cashback offers. Our test van has a list price of £12,500 ex-VAT, but the total comes down to £10,000 with the current £2,500 cashback deal.

This Relay isn’t exactly bristling with standard creature comforts. Airbags and ABS brakes don’t even appear on the options list, for example. CD player? Not a hope.

Central locking? Don’t make me laugh. But, hey – what do you expect for this price?

Standard equipment includes a dual passenger seat, side sliding door, power steering, engine immobiliser and a radio/cassette player. Curiously enough our test model also had electric windows which, according to the spec sheets, you can’t get without a CD player as well. The only options on the official list are metallic paint at £300 and a CD player/electric windows at £310.

As you’d imagine for the price, this Relay is the smallest one in the range, with a short wheelbase and low roof. For those who need larger dimensions, the Relay can be specified right up to 3.5-tonnes gross vehicle weight, with medium and long wheelbases, offering up to 12 cubic metres of space and payloads up to 1,635kg.

There are also more powerful 2.2-litre and 2.8-litre engines on offer with up to 127bhp.

Prices go up accordingly and reach £19,830 (before the cashback deals).

NORMALLY, our test vehicles come specced up to the rafters with all the paid-for options available so it would be natural to assume that I’ve been driving around for the past few weeks like Victor Meldrew. 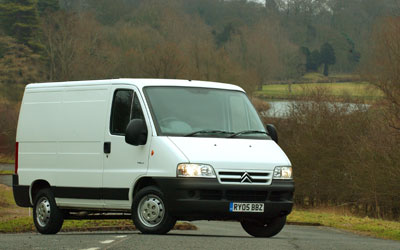 Well, that’s where you’d be wrong. In fact I’m rather taken with this cheeky little contender. It really brought things into perspective the other day when I drove a Volkswagen Golf which weighed in at nearly £20,000 – it suddenly hit me that I could buy two Relays for that price.

However, this van can be annoying. You don’t realise just how much you rely on central plip locking until you drive a vehicle without it. I’m constantly having to walk around the van to unlock the passenger door and on several occasions I’ve left the key in the ignition and walked to the back to unload something, only to find the rear doors locked. Aaaargh!

However, once aboard, the cab is an amazingly pleasant and comfortable place to be for a van of this price.

Many of the standard creature comforts of the Relay are carried over in this bargain-basement model, including a driver’s seat armrest, an A4 paper clipboard on top of the dash and a little desk that folds down from the centre passenger seat. Neat.

Meanwhile, the driver’s seat is firm and supportive and adjusts for reach and height, although it could do with a little more depth in the squab for a rangy specimen like me. There is plenty of space for two more occupants, thanks to the dash-mounted gearstick and there are two grab rails, one on the passenger side and another in the middle of the roof, just in case the going gets a bit racey.

Meanwhile both doors include a cola-bottle bin and there is another cup/can holder on the centre console.

My only real gripe is that mouldy old cassette player. Does anyone actually own cassettes in this day and age?

On the safety front, I was pleased to note that the Relay has a ladder-frame bulkhead behind the driver’s seat to protect its main occupant from flying cargo in the event of an emergency stop.

In the back, there’s a side loading door and unglazed rear doors which open to 180 degrees.

There are six load-lashing points in the floor and half-height load-protecting boards. On the minus side, there is nowhere in the load area walls to tie in cargo.

FOR a vehicle of this price, you’d expect a pretty rough old engine under the bonnet, but again you’d be wrong.

This common rail unit purrs away quietly from start-up and although it only boasts 86bhp, it proves a lively performer.

Our test vehicle came with 9,500 on the clock already so the engine had already lost its initial tightness, breathing free and easy under way. The dash-mounted gearlever makes cog-swapping a pleasant experience and the power-steering is weighted just right, allowing a nice amount of ‘feel’ between wheel and road.Reversing is aided by the addition of massive mirrors the size of meat plates on each side.